The charm of Istanbul is the many little streets, the architecture of the City, its monuments, neighbourhoods and history. Once you have visited the Hagia Sophia behind the church is the Imperial Gate, entrance way to the Topkapi Sarayi (Palace), this was the Residence of the Ottoman Sultan from 1462 to 1856 when the Sultan moved to a European Baroque style Palace known as Dolma Bahce on the Bosphorus, which will be the Residence of the Sovereign until 1922, in both cases the Palaces are opulent and luxurious, far more so than any Palace I have ever seen elsewhere in the World. 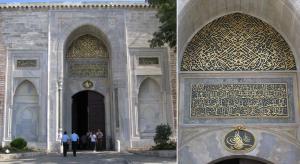 The Imperial Gate and the calligraphy above the door.

Sultanahmet is the old walled city, the flavour of the old city is everywhere in the stones and streets. This old neighbourhood has stories to tell, you simply have to look around to discover them. There are lots of good restaurants, fish and meat dishes, many sweets. I remember walking to Kumkapi, which is a neighbourhood by the giant city walls, many fish restaurants in that area, nothing fancy but lots of fun. 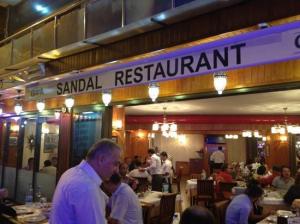 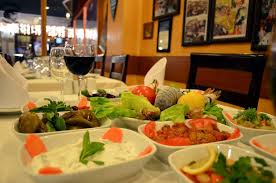 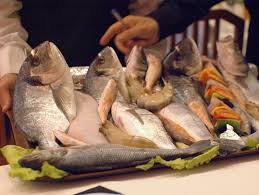 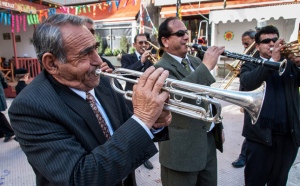 One place a friend and I went in was typically Turkish, the fish was on display and you pointed at what you wanted and asked how much it was, the weight and name of the fish determines the price, it is then prepared for you as you wish, usually grilled served with lemon is how I like it, some french fries or a small salad. At a corner table was a group of 4 men in badly cut black suits, they looked like killers and made me nervous. No one else in this small restaurants paid them no attention, it was probably ok then. Suddenly they pull out musical instruments and start playing old Turkish tunes. So they were musicians and entertained us with lively Oriental music. This small restaurant certainly had lots of atmosphere and the food was good. We walked back to our hotel in semi-darkness in very quiet streets. Istanbul certainly has lots of atmosphere. 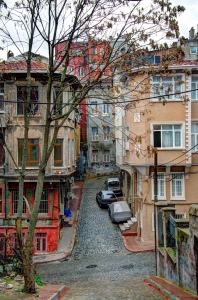 Now to return to our topic of the Topkapi Palace, once inside the Imperial Gate you are in a very large courtyard, to your left is a Church Hagia Irene or Holy Peace, no longer in use, this first courtyard of the Palace was open to all Citizens to come and leave a petition for the Sultan or the Grand Vizier, it was a great meeting place. In this large area is also the Polo Pavilion where the Sultan could watch matches, you will note that much of the architecture is similar to what you see in Persia. The influence comes from the Seljuk Dynasty of Persia (Iran) a Turkic people in origin. When the Turks came to finally settle into Anatolia it was the end of their long migration from Central Asia over many centuries. 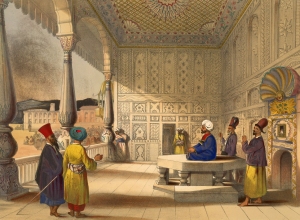 The next gate of the Topkapi Palace complex has two towers, it is the main gate into the walled Palace area and was reserved for Ambassadors, Ministers (Viziers) and the Grand Vizier and other functionaries. 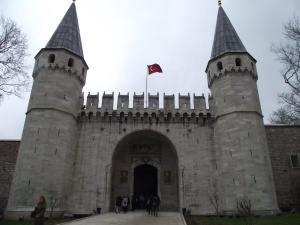 This is the Divan Courtyard a semi-public space. This is where all the affairs of the empire were carried out. Buildings in this courtyard serve administrative and general purposes. The Sultans would appear here only two times in a year, during the religious festivals. The funeral ceremonies and accession rituals took place here. This courtyard is enormous with the sizes of 130 metres length and 110 metres width. The Imperial Council Hall (Divan) where viziers of the Sultan gathered for meetings is over-looking gardens. In the Divan Courtyard is also located the Harem buildings for all the wives and children of the Sultan. They are exquisite rooms of great luxury, but a gilded cage since the occupants very rarely left this area. All paths reach to the Gate of Felicity (Bab-üs Saadet) that gives access to the Third Courtyard. Which was most private and was reserved for the Sultan and his family. No one else was allowed to enter this gate. 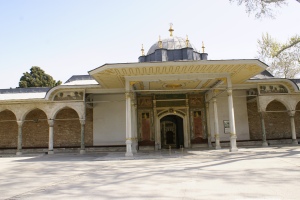 What is interesting about the Topkapi Palace is how it is very similar to the Forbidden City in Beijing in the lay out of progressive gates, courtyards and gardens. 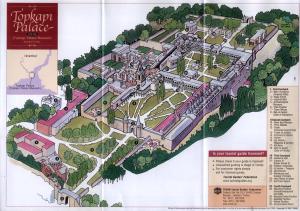 It takes a long time to visit this palace and its grounds, you have to understand how it all functioned, it was a family home for the Sultan, it was also a business centre for the subjects who came to present petitions and seek solutions to their problems, it was government administration centre for a vast Empire, it was the seat of the Executive and Council Chambers, including the execution ground for Viziers who no longer pleased the Sultan, heads will roll! literally in the case of Topkapi, it was also a treasury with fabulous treasures in precious gems and gold and finally it was a nursery for the children and wives of the Sultan in the Harem, the proverbial gilded cage.  The Harem though may bring up ideas of sensual and luxurious pleasure, was also a terrible place, where deadly rivalry took place amongst the wives of the Sultan all of it governed by his mother.

The position was perhaps the most important in the Ottoman Empire after the sultan himself. As the mother to the sultan, by Islamic tradition (“A mother’s right is God’s right”), the valide sultan would have a significant influence on the affairs of the empire. She had great power in the court and her own rooms (always adjacent to her son’s) and state staff.

Again was is interesting about this system is how similar it is the Chinese Imperial System or the Mongol one. This is not so surprising given that the Turks came from Asia and brought with them their Asiatic traditions.

Some photos of the Harem of the Topkapi Palace. Click on photo to enlarge. 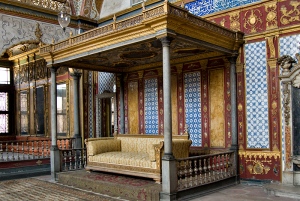 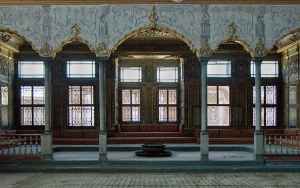 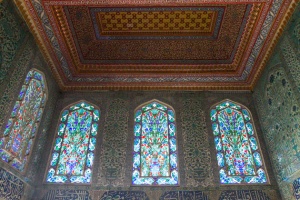 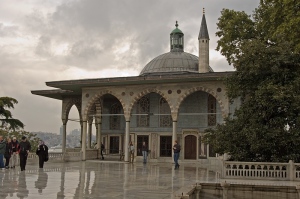 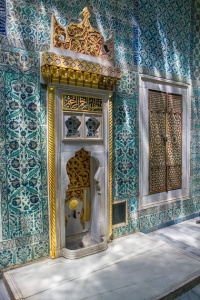 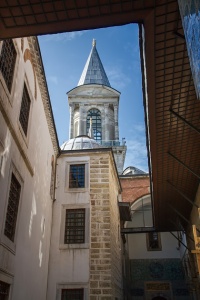 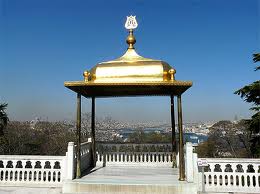 The small pavilion for the breakfast of the Sultan in the Harem, the view of Istanbul is beautiful from that spot. 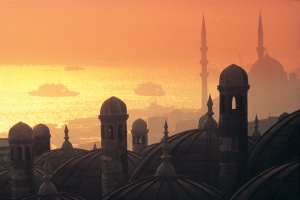