Like any other religious Holiday Easter has music we will like to listen to. Some choices Passion by Saint John by Fancesco Corteccia (1502-1571) with the famous Italian actor  Arnoldo Foà as the narrator voice of the evangelist. Sung in Latin and narration in Italian. Another one is the Easter Cantatas and Oratorio by J.S.Bach sung in German.

Another fact that comes to light when we think of events surrounding the Passion, Death and Resurrection is that the famous Last Supper with Jesus and the Apostles was a Passover Seder, we do not always think of it but it most probably was since they were all Jews.

Our Easter Lunch menu will be a cold Lemon and rice soup, Roast Lamb with rosemary and roasted potatoes and green vegetable, salad, the dessert a Pastiera, traditional Neapolitan cake made for Easter. 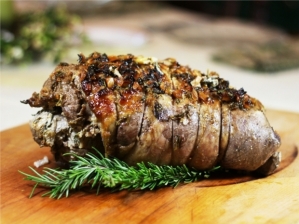 The first thing that strikes you about pastiera is its scent. It’s like smelling a bouquet of orange flowers. Indeed orange flower water and orange peel go into this pie, which has a crisp golden crust and a soft, creamy filling of ricotta, sugar, eggs and cooked wheat, flavoured with cinnamon and vanilla. It is so heavenly that legend wants it to be the creation of a siren, Partenope, protectress of Naples, who concocted it from the food offerings the populace brought her every spring. The cake, Neapolitans say, was the only thing that was sweeter than the siren’s voice.
Another story gives pastiera equally sacred but more modern origins—it is said that a nun of a Neapolitan convent first made it to celebrate Easter, and tried to capture in the recipe the scents of Spring blooming in the cloister garden. Indeed, pastiera was long the preserve of nunneries, which excelled at making the cake.
Today, it is made at home, usually on Maundy Thursday or Good Friday, so that the flavours have time to blend and steep before the Easter banquet.
I will be getting mine from a traditional Italian Pastry shop on Preston street in Ottawa.