The new banner on my blog is taken from a view of the Roman Forum in central Rome. On the right of the Photo is the Palatine Hill. The Arch of Titus stands at the beginning of the Via Sacra, the processional route of the Forum where Roman generals would pass in triumph on their way to the other side of the Forum and then climb the Capitoline hill to the Temple of Jupiter, Great and Best. It is best to go to the Forum early in the morning before 10am to avoid crowds or later in the afternoon after 4pm. It can be a beautiful place, quite interesting with its old monuments and vegetation.

This arch was built to celebrate the final destruction of Jerusalem in 70 AD by Titus, son of Emperor Vespasian. The arch is an honorific monument built shortly after the death of Titus by his brother Emperor Domitian in 80 AD. This arch depicts the treasures of the Temple of Solomon being brought back to Rome as spoils of war by Titus. The 7 branch Menorah, the Arch of the Covenant and the Trumpets. These treasures will be placed in the Temple of Peace where they will remain until 370 AD when they mysteriously disappear never to be seen again. This arch of Titus will be used as the model for all other arches being built around to world, the Arc de Triomphe in Paris is bigger but is based on this model. 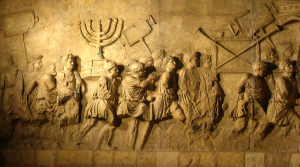 5 thoughts on “Arch of Titus”