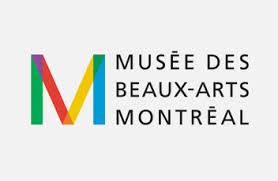 This museum in Montreal started in 1860 on the always fashionable Sherbrooke Street surrounded by the Mansions of the powerful and wealthy, the Golden Mile. The Museum backs unto the slopes of the Mount Royal, the ancient extinct volcano which forms the Island of Montreal, a city founded in 1642 and a commercial metropolis ever since due to its geographical location. It is now a city of 4 million people where 90% of the population speak French.

The Desmarais wing across the street from the original museum building, the two buildings are connected by an underground gallery.

the street Avenue du Musée has been closed to create this outdoor revolving and ever changing work of art between the original museum building and the Bourgie Hall, a former protestant church converted in a concert hall and museum space. The old church is famous for its numerous large Tiffany glass windows.

Bourgie Hall with the gift of Montreal sculptor David Altmejd, The Eye (2011).

From its original Beaux-Arts style building the museum in the last 25 years has expanded and continues to do so with generous gifts from patrons. A fourth building of 49,000 sq. meters is currently being added, Pavillion pour la Paix, a gift of Michal Hornstein and his wife Renata, a generous Montreal couple.

The sculpture called Sun by Dale Chihuly now grace the front steps of the Museum in the Summer time. Sold by Chihuly to the Museum for $1 million dollar, it was bought through public donations, the sum being raised in a matter of a couple of months. 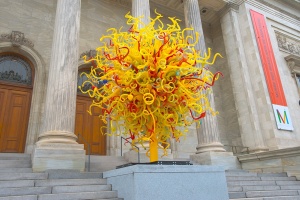 In the last few years the Montreal Museum of Fine Arts has rivalled and sometimes outshone some other Canadian Museum like the National Gallery of Canada in terms of attendance, patron loyalty, generous endowments and varied exhibits.

The latest exhibits on Auguste Rodin (1840-1917), father of modern sculpture is most interesting. Unlike other exhibits showing simply the finished works, this exhibits explains how Rodin worked and how he created his masterpieces. You enter into the secret world of his Atelier and read about his routine to create works which astonished and brought about much criticism. Rodin did break well established conventions and the critics of the time were merciless.

First the drawings, all his life from childhood Rodin was a gifted artist and would draw many subjects. During his life time he would also only use live models, never statues or mannequins. He said that it was important to draw live people because you saw the way the body actually looked and had a better appreciation for all the natural human form, the tension in the muscles, the natural curves, the elasticity of the flesh. He appreciated that no one human looked like another and that bodies came in various shapes. He rejected the academic sculptural school which copied the Classicism of Antiquity. He also used his own body, per example his hands which can be seen in his creation in marble ”The Hand of God”. Taking his cue from the saying that we are made in God’s image.

For all his creations he would first draw, then make a clay model from clay that he collected. He worked hours with clay, shaping it from small round balls and then flattening them. Once the clay model was done he would ask an assistant to make a faithful exact replica in plaster. Like the artists of the Renaissance he used assistants widely who often were themselves masters in their field of work. This was an expensive process but Rodin used it from the beginning, even when he had little money to spare.

The plaster models look like white meringue, they are fine and are said to be very light, a man could lift with his own hands the model in plaster of The Thinker. It speaks volumes of the incredible artistry of the assistants of Rodin.

From the plaster model he would cast his work in bronze or marble again using many assistants. This exhibit had numerous plaster models from the Musée Rodin in Paris, which I am told is currently under renovation. One in particular was the plaster model of ”The walking man” a statue which in its finished form has no arms and no head. The viewer concentrates on the legs and the thrusting movement, the energetic walking pose, the legs like a compass, the muscles in the thighs and their movement forward, the walking man is aggressively moving forward with great strength.

The subject for this statue was an Italian peasant by the name of Pignatelli from the Abruzzo. He impressed Rodin who would say that this man, exhibits a primeval strength born from the Earth devoid of the refined beauty of civilization. He stood like a rock, when you see him you can imagine a Hercules. 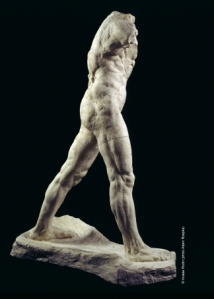 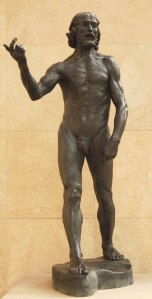 The Saint John the Baptist is taken from the Walking Man same pose and is instantly recognizable as the Saint. He is a man of nature, a true believer, someone who comes to announce the Messiah, what we would call in French un Illuminé.

Rodin would often re-use some plaster casts of arms and legs and putting them in different poses on new creations to suit the dramatic effect he sought to create.

The exhibit also devoted a portion of the presentation of this exhibit to show the Gate of Hell and how Rodin re-used some of the figures in other works he would them make into giant forms.  The figure of ”The Thinker” who reflects on what he has done, the man is lost in reflection, he has just committed murder and reflects on his act of violence. The monumental Gate of Hell was a commissioned work for a new building in Paris which was never built. It is now in a museum garden in Paris.

Rodin also employed for his marbles what he called metteurs en points, these were assistants who would take a bloc of marble and chip off and prepare the bloc for him, Rodin would examine the prepared blocks carefully, his observation based on the clay models and the plaster models representing faithfully his vision of the final work. Rodin would then employ other practionners to continue the work under his strict supervision. He employed some 100 practitioners working on 400 marble works between 1872-1917, they sculpted most of the blocks and Rodin only did the finishing touches, using them again to put the final polish to the completed marble figure. Rodin loved Pentelic marble from Greece and the Seravezza marble of Italy for its incredible purity, the same marble used by Michaelangelo. He would use these types of marbles exclusively.

When you see this exhibit and how it was curated, you wish to thank the curator for such a well done job. I will never look at Rodin in the same way, now that I understand the incredible artistry of the man and his vision of how to represent the human form.

I completed this visit to the Museum by having lunch in their elegant restaurant Le Café des beaux-arts. Great menu and service. A wonderful way to say goodbye to my Dad.

Auguste Rodin towards the end of his life.

7 thoughts on “Auguste Rodin how did he work?”