A dear friend of mine Dr. Spo https://sporeflections.wordpress.com was visiting us this Summer with his much better half Monsieur Someone. Now the good doctor took a private tour of the National Gallery of Canada with Monsieur and came about one of the most famous War propaganda painting (done in 1770) by Benjamin West of the Battle of the Plains of Abraham outside the walls of Quebec City in September 1759 during the Seven Year War. This painting was a gift to the NGC by the Duke Westminster in 1919 in thanks for the enormous support given by Canada to Britain during the First World War. Dr Spo wanted to buy it on the spot for his Office, he was convinced to buy a facsimile instead. 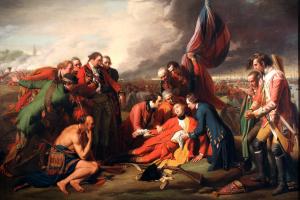 Now by doing some research on this famous battle you realize that General James Wolfe (1727-1759) had thrown down his cards in this game of war poker against the French. The campaign had started some years back and was going very badly for the British. There was also much snipping amongst the British Officers who all thought they knew better than their fellow Officers. General Wolfe was a young man in his early thirties and a bit of a prig and very full of himself. One of his fellow Officers took a strong dislike to him and did very unflattering caricatures of Wolfe and circulated them around to the great amusement of the other Officers. He also wrote some little ditties none of which showed Wolfe in a good light. 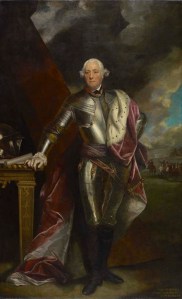 The fellow was George Townshend 4th Viscount Townshend who had his portrait done by none other then Joshua Reynolds one of the Founders of the Royal Academy in London. Townshend was merciless towards Wolfe, he wrote; I never served in such a disagreeable campaign. It is war of the worst shape, General Wolfe’s health is very bad and in my humble opinion, his generalship is not much better.

When Wolfe heard of this he declared; If we survive this war, there will have to be an enquiry. Lucky Townshend, Wolfe died on the Plains of Abraham. 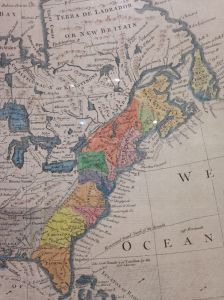 The war ended in Europe and the powers, Britain, France, Prussia and Austria negotiated the Treaty of Paris which became effective in 1763. However the British government despite having won the war made a very bad settlement accepting lands in Canada instead of the Caribbean (Martinique and Guadeloupe) which brought five times more revenue in Rum and spices than all of Canada in a single year. The government of Prime Minister Pitt fell and the next government mismanaged further the whole matter. Canada was not the prize the British wanted but were stuck with it. Taxes were raised to pay for this long war and in 1776 the colonists in the Thirteen Colonies revolted.

All this history came about when we visited the exhibit of the Great Map of the Island of St-Jean now PEI by Samuel Holland made in 1766 which is on show at the Gallery of the Confederation Centre for the Arts in Charlottetown, PEI. This year the City of Charlottetown celebrates its 250th Foundation Anniversary in 1765.

5 thoughts on “about the reputation of General Wolfe, oh my!”