This trip started on Tuesday 6 September, it is our habit to leave one day ahead of schedule when we have to fly to catch a flight in Montreal or Toronto. Though I much prefer to fly from Montreal if possible. We do this because in Canada you never know with the weather or possible storms, Summer like Winter. We left Charlottetown on a bright sunny day, as the plane took off we could see the Hillsborough River and the entrance into the Strait of Northumberland. The island is very green and I got a better appreciation for its topography from the sky. A short flight to Montreal only 90 minutes. Always a pleasure to return to Montreal a city filled with childhood memories.

By being a day ahead we went into Montreal, my home town, to see a special exhibit presented by Hermès, the famous 179 year old French Design House. The exhibit titled Man and Horse was beautifully curated and presented the private collection of Emile Hermes 1871-1951.

We explored the private collection of Émile Hermès. For the first time in its history, Hermès of Paris has agreed to share 250 remarkable objects, which travelled from the enthusiast’s office at 24 rue du Faubourg Saint-Honoré in Paris. The tremendously rich collection—in terms of both history and heritage—traces the history of the horse and its relationship with man. Until now, only a few privileged visitors have been able to see the collection. An exclusive world premiere at the Musée Pointe à Callière in Montreal. https://pacmusee.qc.ca/fr/  The Museum is located in the oldest part of Montreal, the founding site of the city, c.1642.

Being in Old Montreal, we also visited the Basilica Notre Dame c.1676 which is built in the French Gothic style and has been beautifully restored to show the great stain glass ceiling which brings lots of natural light into the church which can sit 3000 people. 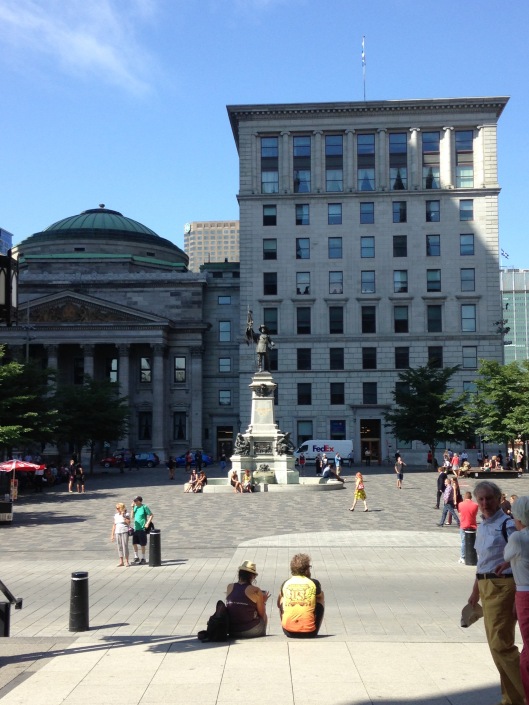 Old Montreal, Place d’Armes with the monument to Paul de Chomedey, Sieur de Maisonneuve 1612-1676 who with Jeanne Mance founded Montreal or Ville-Marie as it was then called. What is interesting about the origin of this great French Metropolis is the original foundation project was strictly a religious one. Ville-Marie was to be a religious settlement for the propagation of the Catholic Faith, things turned out differently.

We had a very good lunch on Place Jacques Cartier by the City Hall at Terrasse William Gray.

On Wednesday 7 September we left from Pierre-Elliott Trudeau International Airport on Air Transat for Dublin, a 5 hour 30 minute flight.