The Leviathan is something that is described as large and powerful. I remember towards the end of my high school, we read this book; Leviathan or The Matter, Form and Power of a Common Wealth Ecclesiastical and Civil—commonly referred to as Leviathan—written by Thomas Hobbes (1588–1679) and published in 1651. It was not easy going because it requires a lot of attention, reflection and in 1975 at 19, I probably did not have the sufficient academic background to understand it all.

Why would teachers pull out such a book in our sociology classes, maybe to expose our young minds to a difficult topic, forcing us to think.

The work concerns the structure of society and legitimate government, and is regarded as one of the earliest and most influential examples of social contract theory. Leviathan ranks as a classic western work on statecraft comparable to Machiavelli’s The Prince. Written during the English Civil War (1642–1651), Leviathan argues for a social contract and rule by an absolute sovereign. Hobbes wrote that civil war and the brute situation of a state of nature (“the war of all against all”) could only be avoided by strong, undivided government.

We also read The Prince by Nicolo Machiavelli and found that book much easier to understand with it’s lessons still applying to our society today. 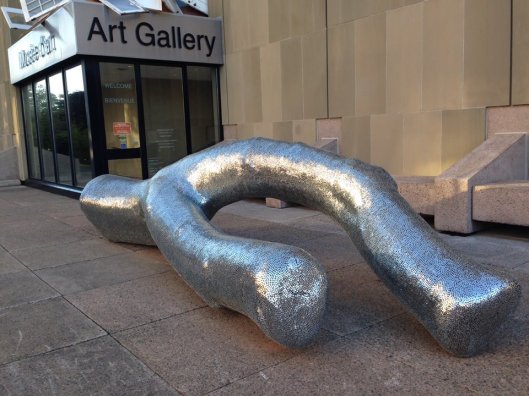 The Leviathan by Paul Griffin of Sackville N.S., at the Art Gallery of the Confederation Centre of the Arts, Charlottetown, PEI. Weighing 5000 lbs. or 2267 Kilos.

This sculpture is an Elm tree from New Brunswick that Paul Griffin selected and brought to PEI by truck. Just the fact that he was able to move such an incredibly large fragment of a tree over to the Island is amazing to me.

In August 2015 we were visiting the Island and saw Paul Griffin hammer daily the galvanized nails into the wood, some 100,000 of them. The Leviathan was then left on the upper terrace of the Art Gallery, until October 2016.

It was moved to the entrance gallery which is underground and leads to the Art Gallery. The new space inside the building with proper lighting gives a far more dramatic effect to this sculpture. A huge crane was required to lift the Leviathan unto a flat bed truck which then travelled around the Centre to the garage entrance on Richmond Street and from there moved inside into the Art Gallery.

Looking at this sculpture I am reminded of another sculpture by Rodin, the man that walks. 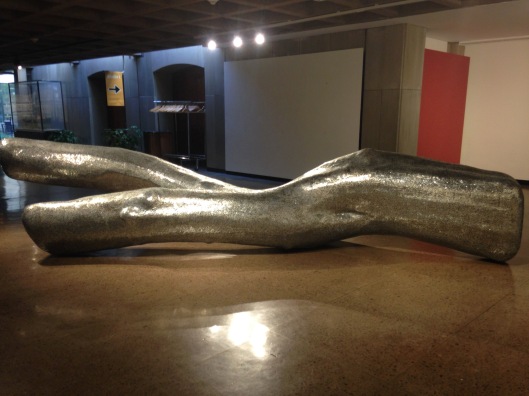 I really like this piece, for its texture and the sheer presence and mass and it occupies now a strategic area leading into the Art gallery.