We are Saturday night 28 January it is the Lunar New Year, one year ago tonight we were in Charlottetown with our friends looking for a place to eat, we went to the Delta Hotel and crashed the Chinese New Year Banquet Dinner, we then went to The Place Next Door because the Merchantman was full of diners and painters, it was a special evening of Art in the Dark. There we met Nathan and Katie who were moving out of what would become our home in Charlottetown on Water Street.

One year later, here we are with our friends at the Confederation Centre Art Gallery for the opening of the Winter show.

However all is not well, tonight because of the travel ban on 7 countries imposed by Trump, tens of thousands of Canadians can no longer go to the USA because they were born in one those 7 countries. Regardless of the fact that they are Canadians and hold Canadian passports, they are barred from entering the USA. The White House has not bothered to inform my government of this fact. Other Canadians who tried to enter the USA today have been checked to ensure that they do not hold hostile anti-Trump views, carrying an iPhone or a computer leads to verification of accounts, they are reviewed especially Facebook for any comment deemed anti-Trump. Many have been refused entry on the spot. This is what happens in totalitarian States not in the USA, but things have changed.

Our Prime Minister Justin Trudeau has shown great courage and decency by upholding the Canadian Value of welcoming those who need our help. At this point we should be reminded that Canada was the founding nation of the United Nation High Commission for Refugee (UNHCR) and also of the UN Peace Keeping Corps, our former Prime Minister the late Lester B.Pearson won the Nobel Peace Prize for that initiative.

Though this week we heard a lot about Mexico and the wall, the fact that President Trump has said he now wants to renegotiate NAFTA, a treaty I worked on during the implementing phase all those years ago, without so much as giving a formal notification to Canada or Mexico and uses language that is condescending and patronizing as if we owed something to the USA, such language and attitude is totally unacceptable. The Government of Canada reminded the White House that 35 million American jobs depend on trade with Canada, we are your #1 Trading partner and Mexico is also equally important, trade imbalance not withstanding.

We will also remind the White House that the use of Torture is unacceptable to Canada and this policy of the Trump administration puts in jeopardy any military or intelligence operation.

When terrorists struck on September 11, 2001 all flights to the Atlantic seaboard of the USA were diverted to Newfoundland and Labrador in Canada, we took care, fed and housed thousands of American passengers for several days, we did not have to do it but we did out of decency and in an act of friendship.

When in 1979 the revolution in Teheran cause the departure of the Shah and the US Embassy was overran, it was Canada who saved a group of American Diplomats and their families and sheltered them and eventually arranged secretly to have them leave Iran at great cost to us, I would also like to remind readers that the UK and France had refused to help those same Americans.

It seems that more than 200 years of good cooperation, trade and friendly relations are now forgotten in the blink of an eye because of the election of one man who is surrounded by a bunch of ignorant people, not to mention the Republican party who is silent and complicit. The actions and decrees of Mr Trump this week are a dark stain on the USA and the American people and a threat to World Peace, I am not exaggerating. 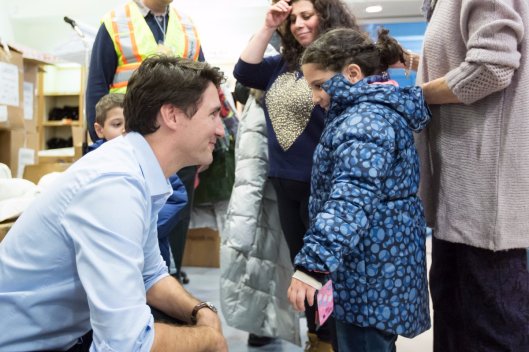 10 thoughts on “Things are unravelling”