On this 6 February in 1952 King George VI died in his sleep at the age of 56 of complications from cancer. His daughter Princess Elizabeth was proclaimed Queen and acceded the throne of Canada, Great Britain and the Dominions of the Commonwealth.

Queen Elizabeth II celebrate 65 years (1952-2017) on the throne today, but the Canadian monarch will not be spending it with parades and confetti. Instead, Queen Elizabeth II will spend her Sapphire Jubilee quietly and somberly in commemoration of the death of her father, King George VI.

The Queen is the first Sovereign to reach a Sapphire Jubilee. Queen Victoria reached her Diamond Jubilee and was the longest-reigning monarch until H.M. Elizabeth II surpassed her in 2015. While Queen Elizabeth II’s Diamond Jubilee was well-celebrated in 2012, this one will be more solemn.

Today she will remain at the Sandringham estate (where her father spent his last days) to contemplate on her long reign.

Queen Elizabeth II, nicknamed Lilibet was only 25 years old when her father died. She was then after a mourning period crowned in 1953 in Westminster Abbey. When she married Prince Philip in 1954, her father gave her a necklace and a pair of sapphire earrings. A decade after her coronation, she had a matching tiara and bracelet made.

The 90-year-old queen is one of the longest-ruling monarchs in history. The Sun King Louis XIV of France ruled for 72 years.

Picture taken last month at Buckingham Palace, from left to right, Camilla Duchess of Cornwall, Prince Charles the Prince of Wales, H.M. Queen Elizabeth II, Prince Philip Duke of Edinburgh, Prince William Duke of Cambridge and Catherine Duchess of Cambridge. The men in this photo are wearing the Order of the Garter on their left leg with the blue sash of the Order.

What is interesting about this photo are the large portrait paintings framing this picture, on the left H.I.M  Emperor Frederick III of Germany and King of Prussia and on the right his wife Empress Victoria, who was the eldest daughter of Queen Victoria. The link to the Imperial Family of Germany who are first cousins of the Royal Family has been quietly emphasized lately. The current head of the German Imperial Family is 40 yr old H.I.R.H Prince Georg Friedrich of Prussia, their cousin, in the photo below with his wife Princess Sophie of Prussia. 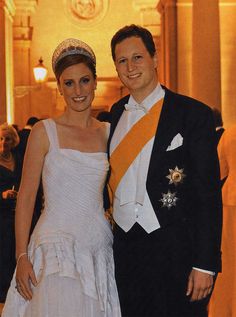