Well this week has bene busy like all weeks so far this Summer, always something going on. I had the great pleasure of being published for the third time in the Guardian our local newspaper in PEI. The issue is a municipal one of concern to the citizens on the matter of lack of By-Law enforcement by City Hall.

I worked some more on the organization of the Benefit Gala for the PEI Symphonic Orchestra in September. We have a list of 59 gifts/donation to our Auction, the gifts auctioned off are very nice and am sure people will be happy. Other members of the committee have worked on the entertainment, we have some big names who accepted to donate their talent and time for our event.

The Art Gallery has been busy,  we have a lot of tourists from Quebec again this year, this means tours in French. I like to think they are passing through going to take the ferry to the Iles de la Madeleine but in most cases no, they come here to visit and see, many for the first time.

The weather has been wonderfully sunny and next week more sun.

Pride Parade passing in front of the Confederation Centre of the Arts.

Staff from the Canadian Broadcasting Corp in PEI marching.

Every political party was present, Liberal, NDP, Green, the one exception the Conservatives who prefer to identify with Trump, sad for them, they do not support the LGBTQ community at all, maybe that is why they are in opposition in the House. 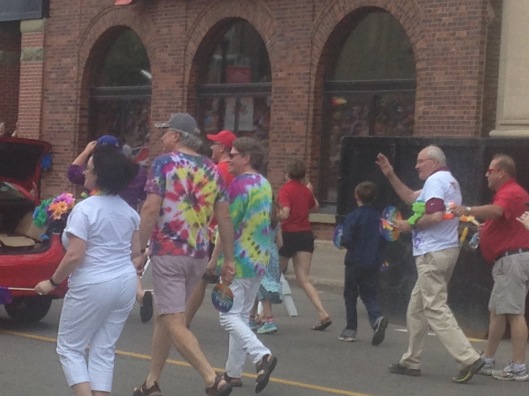 The Premier of PEI, the Hon. Wade MacLauchlan and spouse, both wearing psychedelic shirts, so 1970’s.

Many Churches were also present in the Parade. 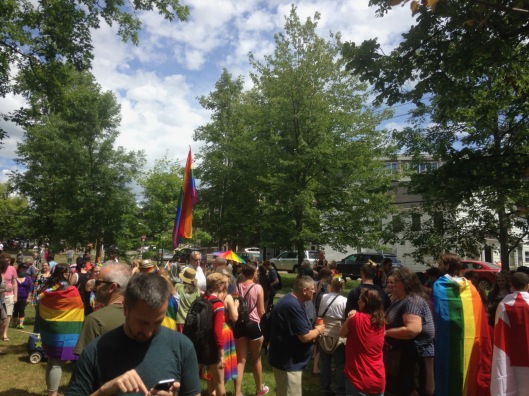 The after parade party in Rochford Square in Charlottetown, Will said to me, did you notice how many parents and grandparents are here with their kids and grandkids. Rainbow flags painted on their faces and everyone having a lot of fun. It really was a community event for everyone.

8 thoughts on “The week”