This morning in the Senate of Canada the new Governor General, H.E. the Right Honourable Julie Payette spoke for about 15 minutes in French, English and Algonquin without notes on what would mark her mandate. It was very impressive to watch, I have never seen that before. The Chiefs of the First Nations in the Senate were delighted by her address to them in their own language, certainly a first. In her speech she made an impassioned appeal for Canadians to tackle “serious and pressing global issues like climate change, migration, nuclear proliferation, poverty and population growth.

Also today her new Personal Coat of Arms was unveiled, this is a gift from the Sovereign Queen Elizabeth II. 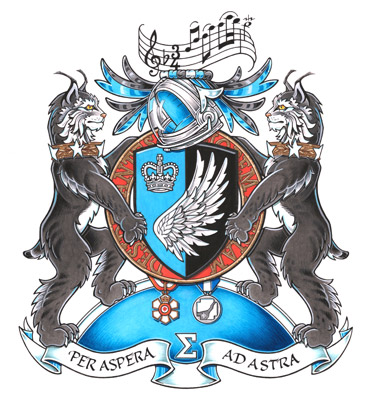 You see the musical score at the top it is from music of Alessandro Marcello, you can hear it below. Payette is a very musical person. She often sings in choirs and loves baroque music. She has been associated with Tafelmusik and they played at her investiture today.

The shield has an Astronaut’s helmet at the top for her former profession. Two Canadian Lynx, an elusive animal support the shield, the wing is her aspiration to always do better and the Crown is the symbol of her Vice-Regal function. The motto surrounding the shield is taken from the Order of Canada. Her own personal motto appears at the bottom

Through hardship to the Stars.

The mathematical symbol for the sum, Σ (sigma), placed in its centre, illustrates the power of facts and science, and reminds us that we share the Earth and a responsibility to care for it.

6 thoughts on “Speaking without notes”