We are having a beautiful Fall Season with temperatures well above normal. I heard this week that Winter in the Maritimes this year should be warmer than normal  and snow levels well below normal. Given that we have an Atlantic weather pattern this may mean more rain and fog and temperatures like those of Continental Europe in the 0 to +5 C. range, which is easy to take.

The cruise season is coming to an end this week on Friday. The Disney Ship is coming into port for the very first time and its arrival had been expected for some time. With the end of the cruise season usually most tourist related businesses close and quite a few have already closed. Some restaurants who cater usually to tourists will try remaining open until Xmas time. The whole idea now for some years has been to extend the tourism season to 9 months instead of the usual 4 months. In the long run many business owners would like to have a year round season with activities etc. But for this to happen we will need more direct flights to Charlottetown airport all year round. At the moment Halifax which is only 20 minutes away by air or 3 hours by car is an international hub, Montreal and Toronto are the other two major airports but in Winter flights to those two cities are cut down severely which creates a problem for our growing population and our link to the rest of the planet. 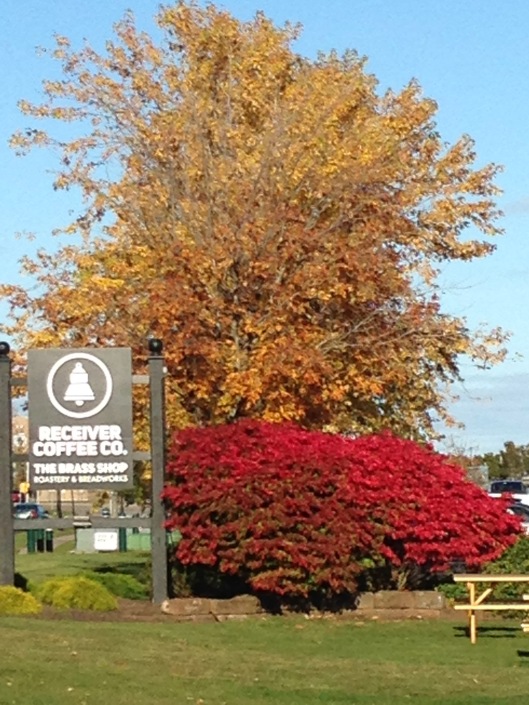 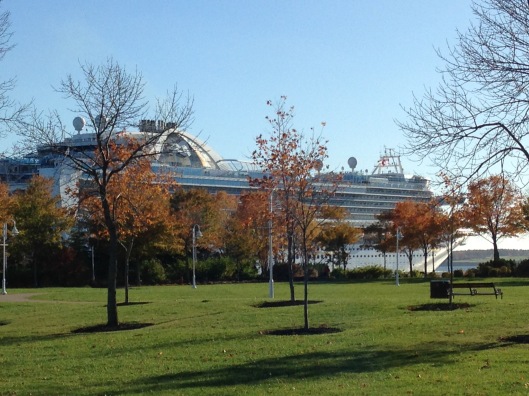 The cruise liner leaving as seen from the park behind our house.

Talking of which, PEI has now reached a total population of 152,000 people, with 49% of the entire population of the Island living in the greater Metropolitan area of Charlottetown, this according to statistics recently published. I had no idea I lived in what can be described as a Metro City area. Our population is still a majority of over +55 years old and growing. But then again in Canada the population is aging rapidly despite high level of immigration, which it turns out is not the solution to the aging demographic.

No 2 West street is for sale at $1.2 million, it is a Georgian style house and property on the water. 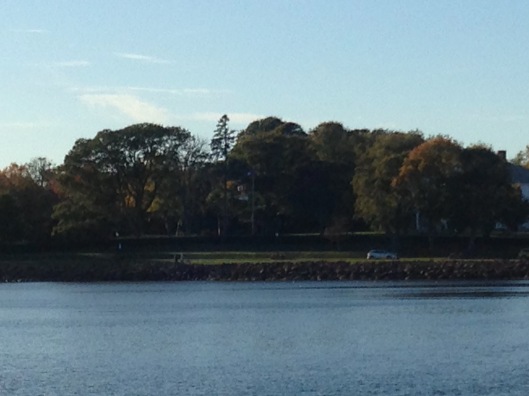 View from West street, Fanningbank the Official Residence of the Lieutenant Governor since 1834.

The City last night was very quiet, no cars in the street and almost no one about. It is a luxury to have this sort of quiet. The cold I had all last week is finally over, a lot of coughing, lack of sleep and discomfort.

I am also attending this Fall, courses at the Seniors College which is a program offered by Holland College. One course is on French painting in the period of 1830 to 1871, a troubled period in France and in Europe marked by emerging social movements due to the transformation of society in general with the industrial revolution. France is going through one Royalist regime to another and finally a return of the imperial regime with Napoleon III the nephew of the great Napoleon. How does painting and painters express themselves in this age.

Here the cruise ship turns to exit the harbour and enter the Strait before turning Westward.

The other course is given by the Head of the History dept at the University of PEI. Dr Ed MacDonald gives superb lectures and they are highly informative and entertaining. There is a lot of history to PEI and its Capital Charlottetown founded in 1765 by the British.  The old city is drawn like a Roman Military Camp and it has kept to this day the original plan. There is a lot of history in Charlottetown, a lot more than I suspected, it is complex and there are many actors. If Charlottetown at one time in the history of Canada occupied the 11th rank in terms of large cities in our country with Confederation it has been pushed to the margins and is now around 130th in the ranking. In 1867 with Ottawa as the new Capital of the Dominion everything shifts from the Atlantic to central Canada and Montreal becomes the Metropolis and big shipping port some 1000 km away.

This week our new Lieutenant Governor took Office, she was sworn in at Tignish which is an old Acadian settlement dating back to 1799. This is a first on the Island, since all Governors have always been sworn in at Charlottetown.  She is from Tighish which is on the Western tip of PEI about 2 hours by car from Charlottetown. The PEI Regiment also has a new Commander, Colonel Moriarty. Someone pointed out to me that when Antoinette Perry was named Lieutenant Governor, the first thing that came to mind was the person who gave her name to the Tony Awards, but that Antoinette Perry died in 1946 in NYC.

This week is also busy, we are having a visitor who is coming to look at houses as she is moving to PEI from Toronto. I also made an appointment to have the car serviced for the Winter, I always like to have this done before the rush.

10 thoughts on “The last week”