So here we are at Canada Day weekend 2018.  Last weekend was St-Jean Baptiste, the holiday of French-Canadians which goes back to ancient times in Gaul.

We are escaping the Capital by going up West to the Miscouche area which is near Summerside, to a small settlement called St-Nicholas. We have friends who have this very large farm, they don’t farm but rent out to farmers. They do grown wine and have a large wood lot and beach, in the distance you can see the Confederation bridge.

We are bringing the dogs with us, will see how they behave. Our friends have two old small dogs, it will be an interesting experiment.

We are also bringing a Moka-Chocolate cake made by a new pastry chef, I am trying her out but people who ordered her cakes say she is quite good.

It will be nice to be away from the City, though so far it has been very quiet tourism wise, not at all like last year with all the 150 celebrations.

I have been very busy training guides for both my volunteer jobs at Government House and learning all about the Art exhibit at the Gallery not to mention my on-going campaign. So I am not unemployed.

Our only concern is Nicky and Nora, especially Nora who tend to want to explore, so they will have to be on leash at all times outside. The weather promises to be hot and muggy 26 C.

this Realtor aerial photo shows the wooded area of the farm. The new housing development is called Sunbury cove and is not part of their farm. To get to their beach area we have to drive through the forested area and across the new development road. You could not walk from their house the area is too swampy. 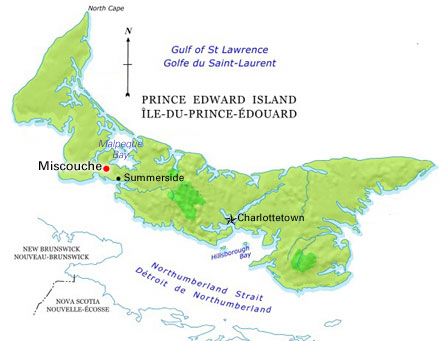 By car a distance of about 50 minutes driving

We had a funny Winter with little snow, much icy rain, fog and very high winds, our Spring was cold and wet. Yesterday 22 June finally warm weather and warm enough for us to take our Summer clothes out and put the Winter stuff away.  Today is 24 June, Saint Jean Baptiste day in French Canada or La Fête nationale as it is called in Quebec and it is the beginning of the of the week long Canada day celebrations.

This weekend was also the opening of the Summer Show at the Confederation Centre Art Gallery, two artists are featured this year, Marlene Creates and Kent Monkman.

Creates has a 40 yr retrospective of her work in 5 parts, she describes herself as an environmental artists and lives in Portugal Cove on the Avalon Peninsula in Newfoundland on a 6 acres plot of wood land. Her work is about her relationship with nature and how nature reacts to her or vice versa.

The other artists is Kent Monkman who is presenting the history of Canada seen from the point of view of a First Nation artist as a response to Canada’s 150. The exhibit of paintings and sculpture is divided in IX Chapters as a story told by Miss Chief Eagle Testikcle, the alter-ego of Kent Monkman and entitled Shame and Prejudice, A story of Resilience.  The first chapter starts with New France, The reign of the Beaver (1534-1763) when indigenous people lived side by side with French settlers and natives were part of the economy as partners. The Beaver is Canada’s National Animal Symbol and the pelts during the French Regime was a currency.

The other chapters of the exhibit are devoted to the colonial policies of Britain and Canadian English colonial politicos also known as the Fathers of Confederation but for this exhibit as Confederation Daddies and Bears. The exhibit has a homo erotic, S&M tone around Chapter II and the great paintings with panoramas along the lines of painter Albert Bierstadt show scenes which may be disturbing to some by knocking the stuffing out of the pomposity of those politicians and the creation of a united country, including the praying hands fashioned on those of the artist Kent Monkman and made of washable silicone to be used as a sex toy.

The other chapters are about the Indian Problem, Starvation, Forcible transfer of children, Incarceration, Residential schools, Urbanity today. All with scenes of sorrow, violence and death. However despite it all the Native population is resilient and survives.

In the artist words, if Canadians celebrate the big 150 Birthday, indigenous people cannot forget that the last 150 years have been most devastating with deliberate policies of starvation, the reserve system, legacy of incarceration, sickness and disease, permanent third world living conditions on reserve, contemporary urban disenfranchisement, violence and poverty.

So Miss Chief Eagle Testikcle is your guide in this exhibit confronting colonialism, she lives in the past, present and future, she embodies the flawed and playful trickster spirit, teasing out the truths behind false histories and cruel experiences.

The weather here in PEI has been more than unseasonably cold and abnormal, but this is Climate Change and we feel it. We have had frost at night in June, one or two days of above 19C and nights of 6C which again for mid-June is not normal. Everything is a month late, and so gardening and gardens in general have not appeared as they usually would by June 1.  There is a saying on the Island ”Don’t plant your flowers before the 10 June” Few have put their boats in the water, the marinas should be full by now but are half empty. If last year for the 150th of Confederation we were run over by tourists, not so this year. We will get tourists but I don’t think we will get the crowds of last year.

Today we drove to York which is 12 minutes from our house in the countryside to the York Nursery, they have a beautiful array of flowers and their prices are better than the big in town nurseries. So we got flowers to put in our boxes on our balcony. The price of flowers and green plants in general is way up from 3 years ago. I do not know what the explanation is to that one. 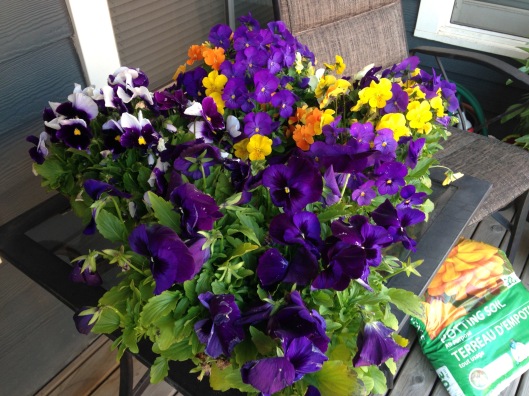 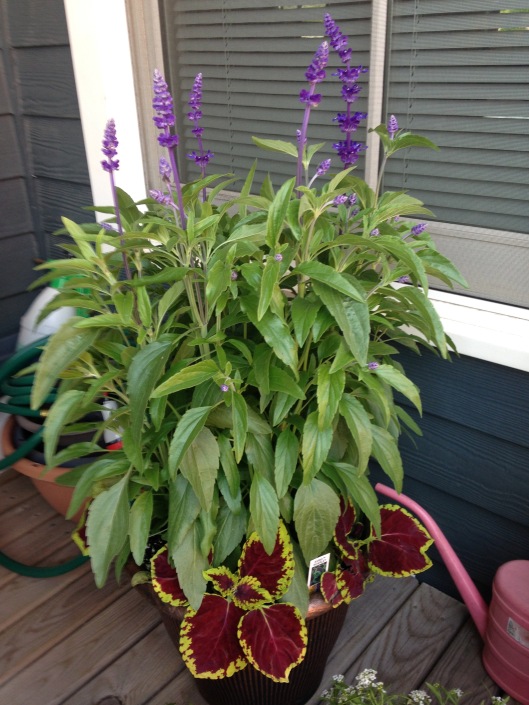 Hopefully the weather will improve and warm up, the Winter was dreary and rainy, we need sunny weather for the beach.

Here is a picture of my new front plate on my car for this year. We have foxes in cities and towns on the Island a left over from the fox fur farming days. Now they live in neighbourhoods because the coyotes have moved in from the mainland and populate the rural areas.

Now that Canada has been declared a National Security Threat to the USA by none other than Prez Trump, let us look at others who have been declared such in the past by other Presidents and see if Canada fits in with this description.

I am sure being a retired diplomat that President Trump has already directed the US Government to take such action against Canada, it goes well beyond tariffs on steel and aluminium.

As the former chairman of the Joint Chiefs of Staff, Adm. Michael G. Mullen, was fond of saying, US national debt has become perhaps our top national security threat. The United States has been running trillion-dollar deficits, resulting in a huge explosion in the country’s indebtedness. Publicly held debt now equals 70% of gross domestic product, a threshold many economists consider significant and highly worrisome. Making matters worse, half of our current deficit financing is being provided by foreigners.

Others threats to the security of the USA are:  unstable Middle-East with no peace in sight, Climate change, Cyber terrorism, President Putin, the energy future, South Asia (Afghanistan and Pakistan), the next space challenge, unstable Africa in the face of epidemics like Ebola. With President Trump’s unpredictable behaviour he may by himself create instability for the USA and create new unnecessary crisis.

This weekend in Charlevoix, Quebec the G7 is meeting and the attitude and tweeting of President Trump and his early departure from the conference simply isolates the USA in the world and angers is most trusted and long term allies. Prime Minister Trudeau is correct is stating that the declaration of Trump is illogical and insulting for Canadians. But the President does not seem to care and believes he can bully Canada and other nations. We will have to bow to his demands, however now Canadians are more united than ever in the face of this aggression by the American administration.

So I chose to listen to music instead by Emmanuel Chabrier 1841-1894. When confronted by fools take the high road, this is what I am doing.

I hired a photographer to work with me during my campaign to take live candid shots has events unfold, I do not want pose picture. All my photos so far are candid on the spot. I have been very lucky with my photographer, Jared Doyle and Stephen Clarke, both are young under 25 but very good with all the new gadgets and electronics.

As we go along the street to meet people in my Ward and speak face to face which is very important here in PEI if you want people to vote for you. If the weather can only get warmer, it will be easier to canvas door to door.

I am also working on a new media project which I hope will be up and running next week.

In this photo I like the fact that my pamphlet is being held up by the person I am speaking with on the street. I was not aware that he was holding it up until I saw this photo.

Here at Government House or Fanningbank as it is known, I am listening to the Lieutenant Governor of PEI, who is addressing a group of young people who came to visit the Official Residence last week.

I make notes of what people say and who they are, etc. It is a good way to document what is of interest to people and what is of concern to them.

On June 2, 1946 Italy became a Republic after a referendum to abolish the Monarchy, King Umberto II of the House of Savoy left for exile in Switzerland where he died in 1983. So today is la Festa della Repubblica Italiana.  An event we witnessed while living in Rome. Highly ceremonial and done well with a great military parade on Via del Foro Romano. The Italians love uniforms and parades and we discovered that the Italian Navy has a cavalry regiment probably the only one in the world. This video is about the ceremony at the Altar to the Nation on Piazza Venezia, the centre of Rome and before the military parade which takes place moments later behind this giant white marble monument amongst the ruins of the Roman Empire. The Ceremony is presided by the President of Italy, Sergio Mattarella accompanied by the Prime Minister and the Cabinet.