The point of visiting Geiranger is for the multitude of waterfalls and the truly spectacular scenery and the famous Eagle’s road, an eleven hairpin road that soars above Geiranger an engineering marvel and for driving enthusiast a pleasure, since 1955 Geiranger is joined year round to other points in Norway. Yes this is the domain of the White Tailed Eagle and though they are numerous couple nesting, like all birds of prey, they can be elusive. 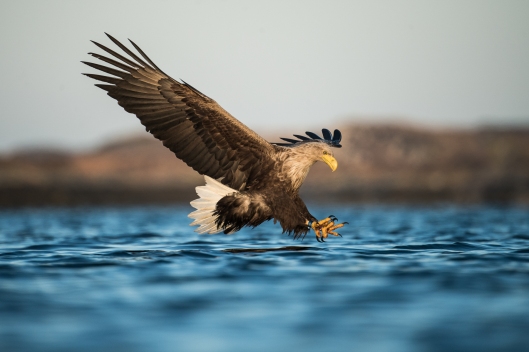 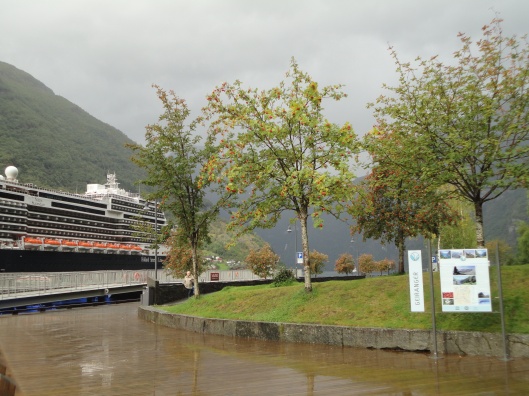 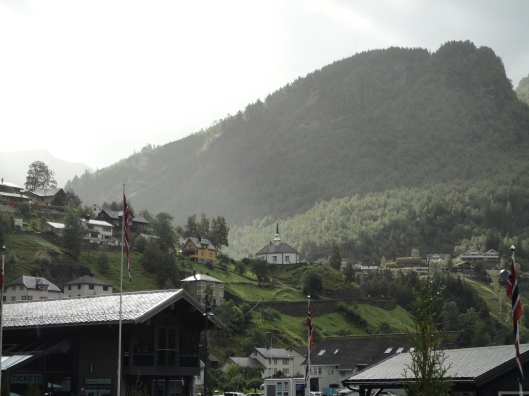 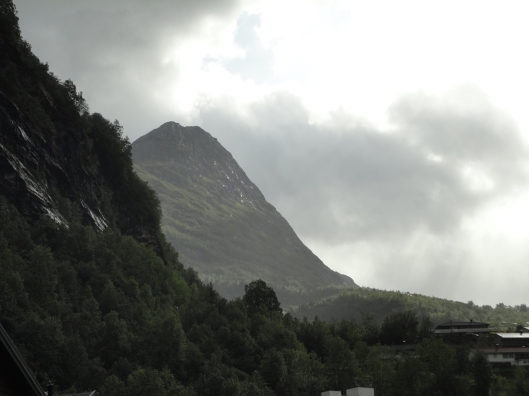 Norway is a very progressive country when it comes to the challenges of the Climate Crisis. In Geiranger, tourists are invited to rent an e-car to see the surrounding country side. Norway has 60% electric cars on its road including trucks and buses. 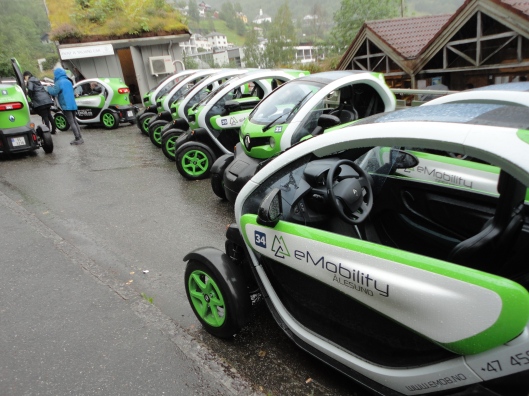 They are made by Renault the French car maker. 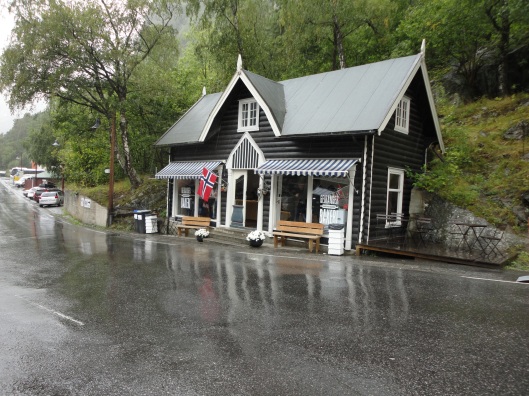 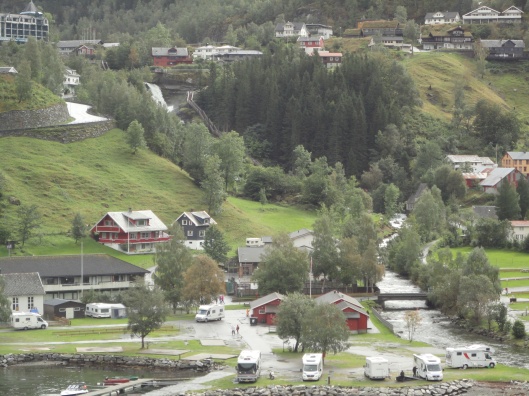 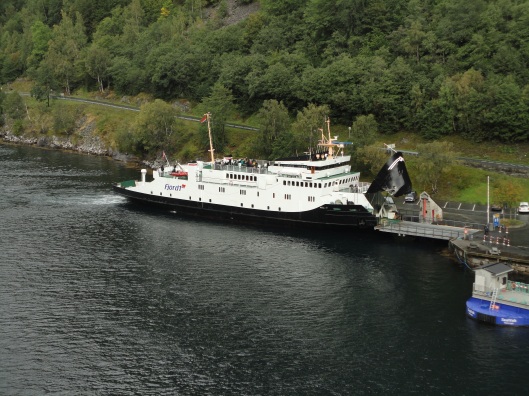 regular ferry service runs every hour up and down the Fjord. 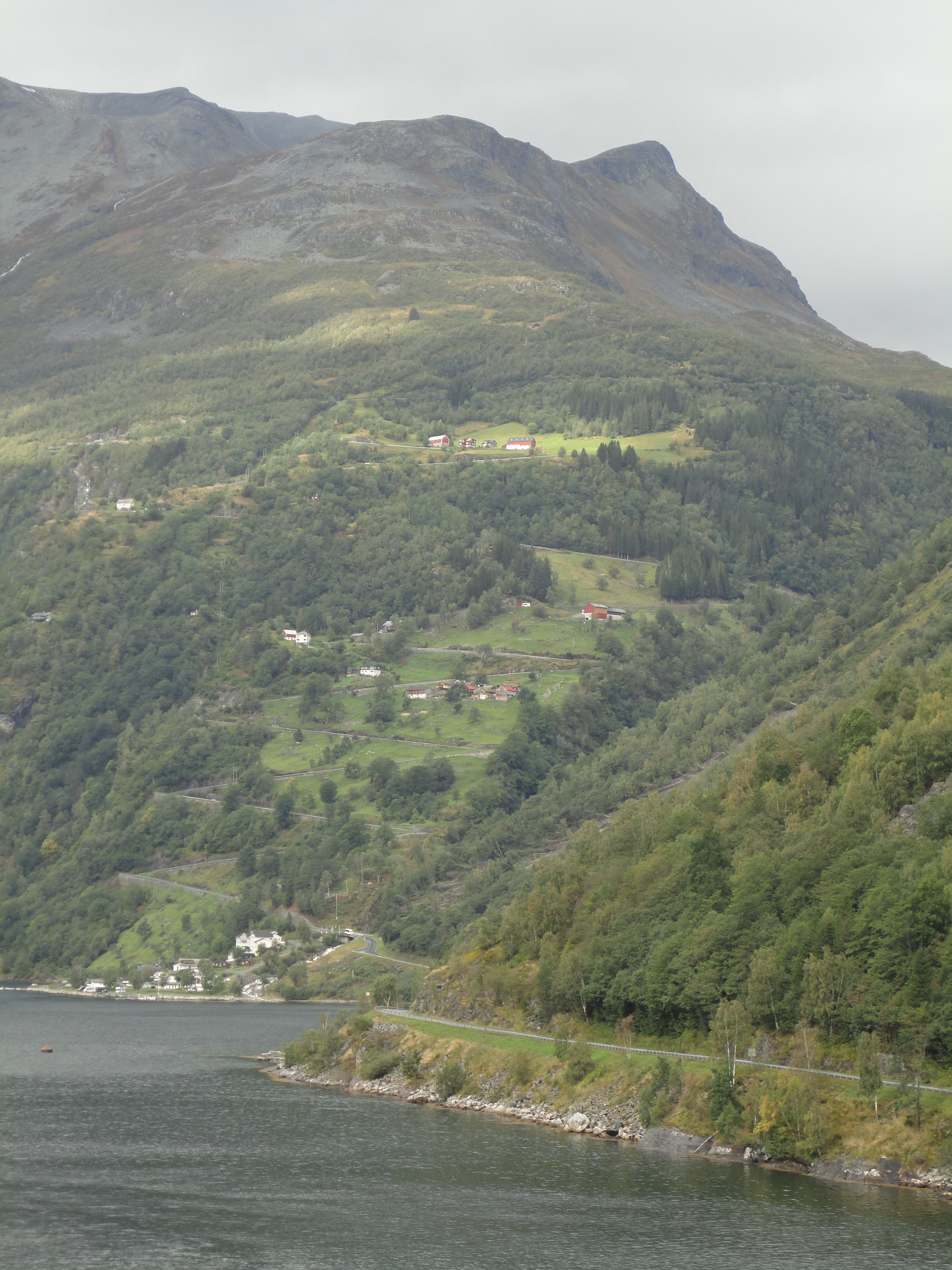 Here is that Eagle’s road with its 11 hairpin turns zigzagging up the mountain side. We saw cars but also buses and lorries come and go. In Italy I navigated such roads and there is a trick to them to avoid going off the road when doing the turn, not complicated really but you have to pay attention. The top of the mountain here is at 7000 feet, people farm up there and some have orchards also. 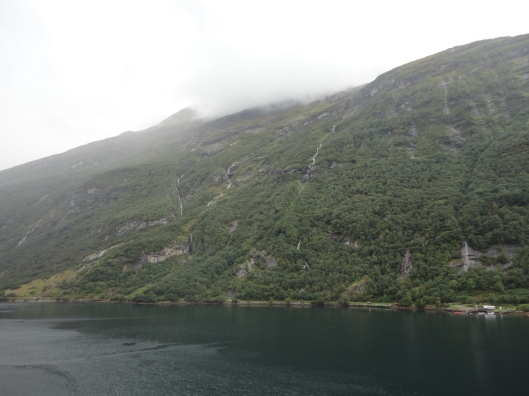 On this photo you can see various mountain streams cascading down over thousands of feet into the Fjord. 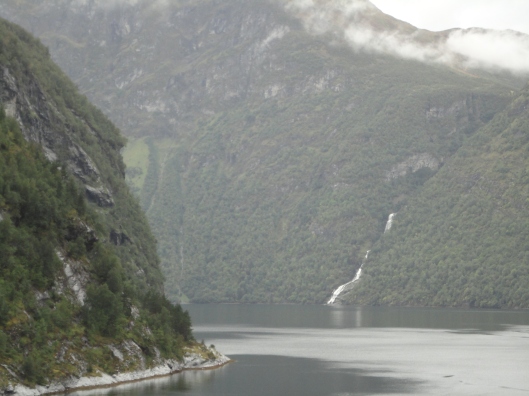 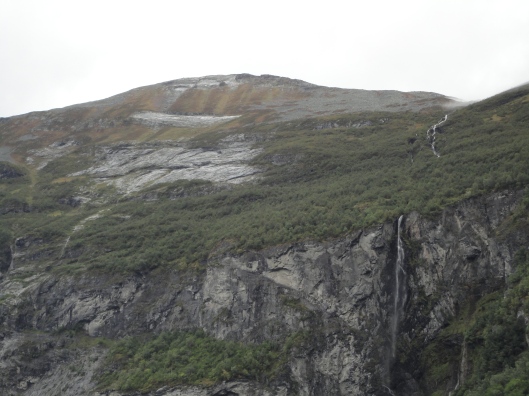 The only sound you hear is of the water cascading down, soothing, relaxing and eerie all at the same time. 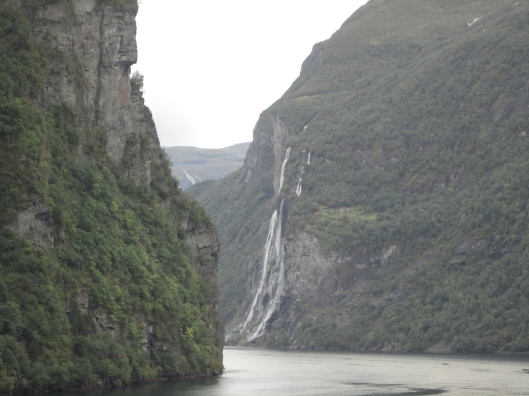 This one is called the 7 sisters, I only counted 5 but this is due to the late season when water is not so plentiful. In the Spring you have 7 cascades. 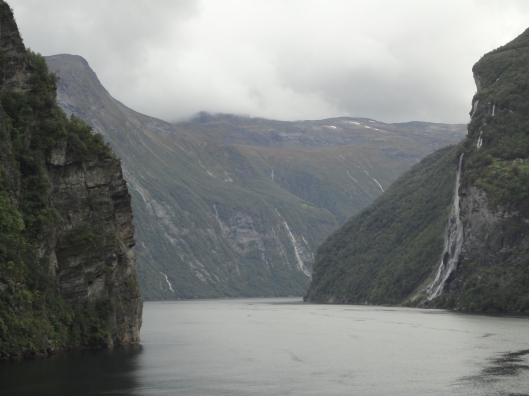 On this photo you have cascades on both sides of the rock face. 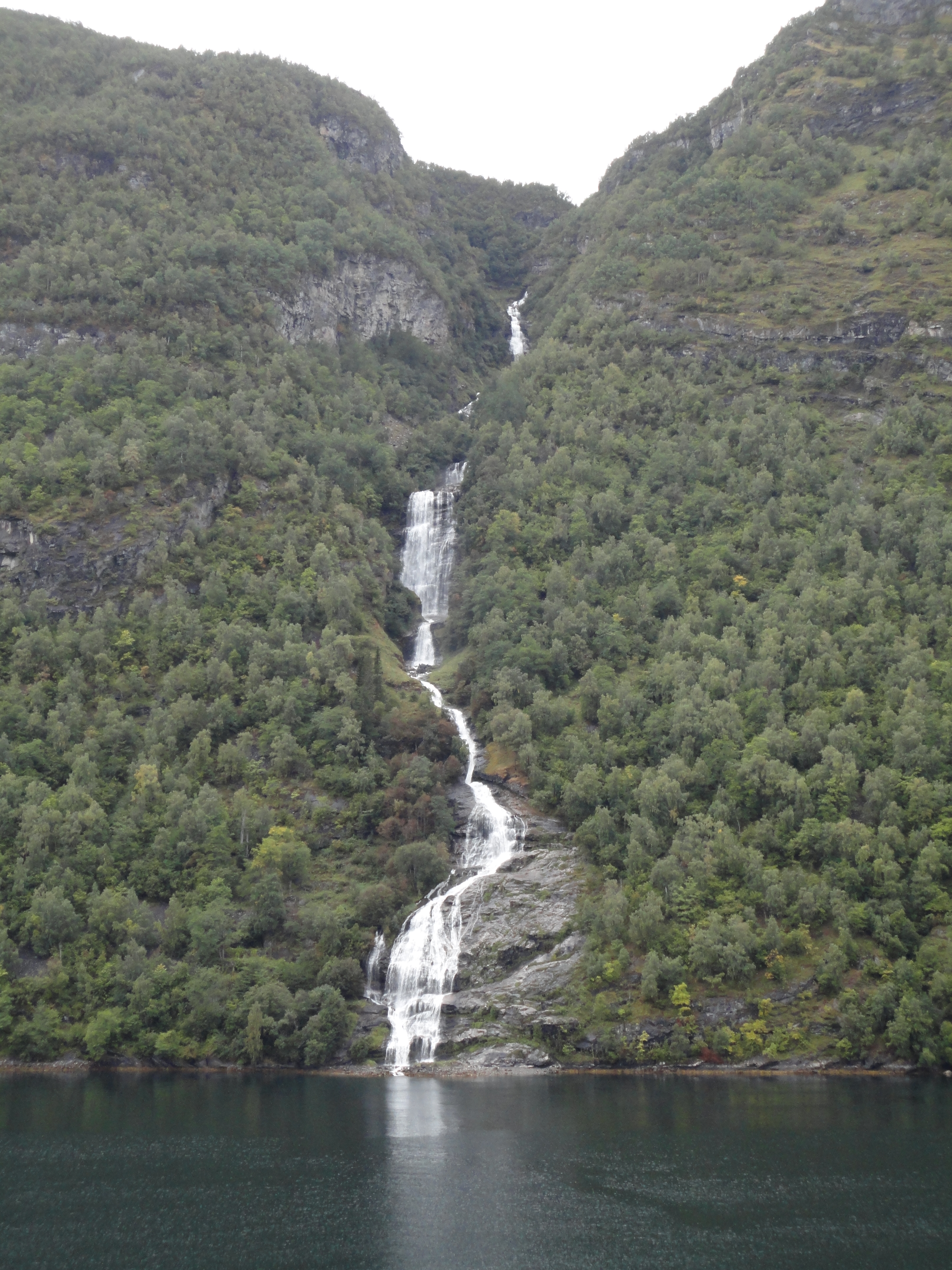 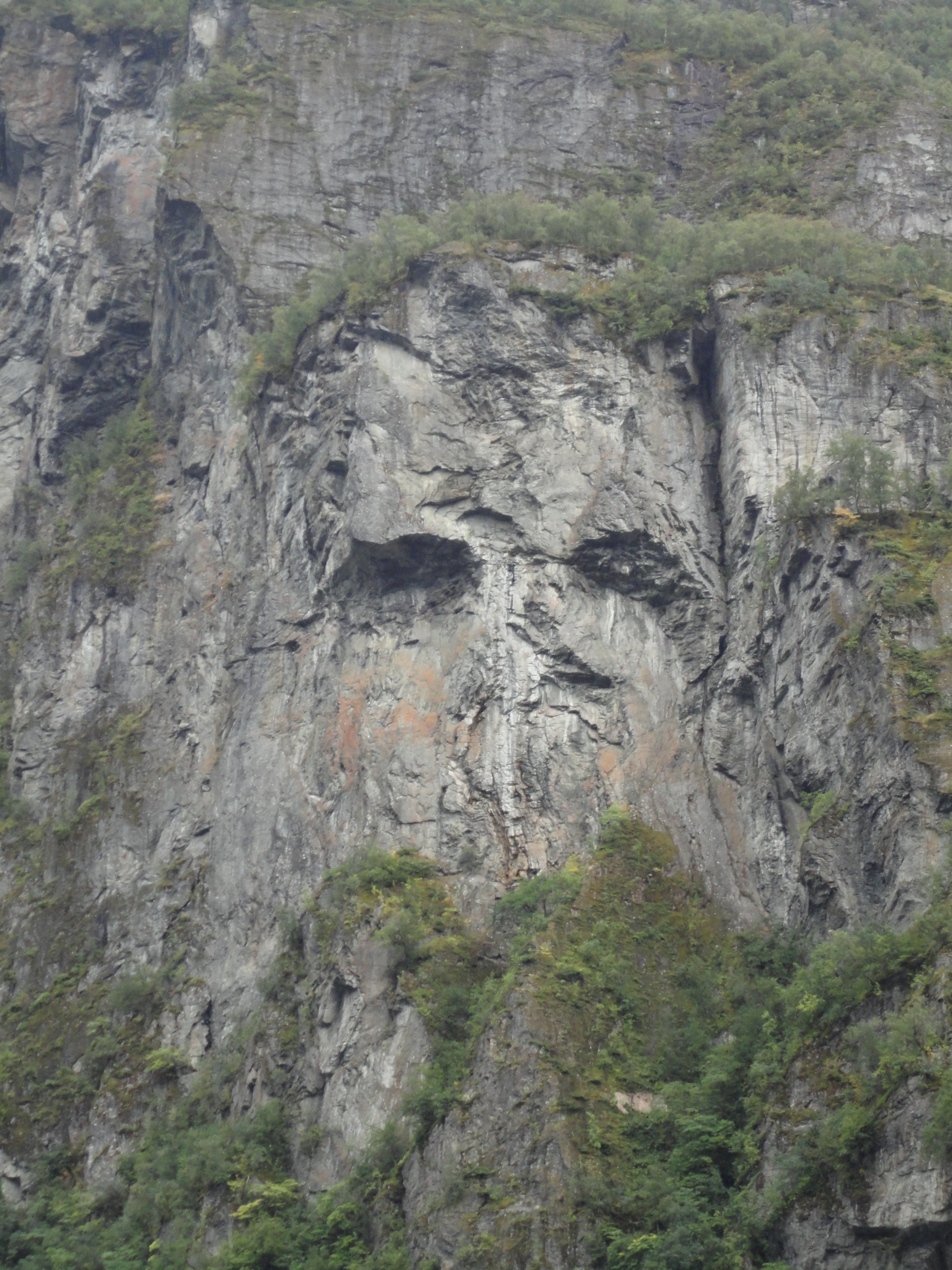 As our ship turned the corner of the Fjord, the Troll Guardian appeared, he is said to be guarding the 7 Sisters, which is on opposite side. 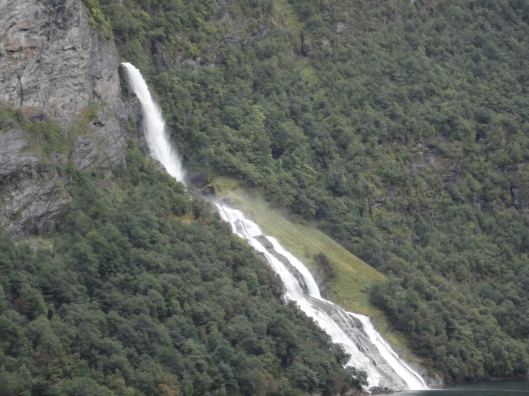 This cascade is called the Suitor, a silly story about the suitor of the 7 sisters cascade.