In our Household I do all the shopping, Mr Will does most of the cooking and baking. He gives me the lists of ingredients, some rare and obscure even Gourmet magazine has not thought of it.

This means that on our small island sometimes shopping for ingredients can be difficult and challenging. Since 2010 things have improved a lot and though the native diet is not sophisticated it is improving with the constant flow of Canadians arriving here to settle and introducing a more cosmopolitan gourmet cuisine.

This month I was able to persuade the manager of our grocery store (it’s a national chain) that he should import veal since I knew that out of province stores had it. Next comes spices. Today Chef Will suddenly announced that in a burst of inspiration he was thinking of a new recipe and he needed Star anise and Cardamon seeds. These are two spices common everywhere in Canada except here in PEI land of potatoes.

Cardamon is a wonderful and versatile spice, I remember in the Middle East how it finds its way into coffee making and gives the most wonderful flavour. I finally found both spices at the Bulk Barn, though when I asked the clerk about it, he had no idea what I was talking about. This happens a lot here, radicchio is confused with red cabbage, NOT the same thing, but hey I am not complaining at the check out I pay for cabbage instead of radicchio a difference of $3.00 in price.

Last week I was looking for Juniper Berries, commonly used to make gin. Given that PEI has a big gin industry and produces its own 50 Proof Island Gin you would think that Juniper berries is a common staple, NOT so, it is not.  Luckily for us a friend had some on hand but she had bought them off Island. Chef Will needed them to make Potted Pork with Juniper berries. I helpfully suggested that we use Holly berries nice bright and red instead, festive looking. I was told they are poisonous and would kill off our guests, that would be most inconvenient  I presume.

Here are some photos of heirlooms. 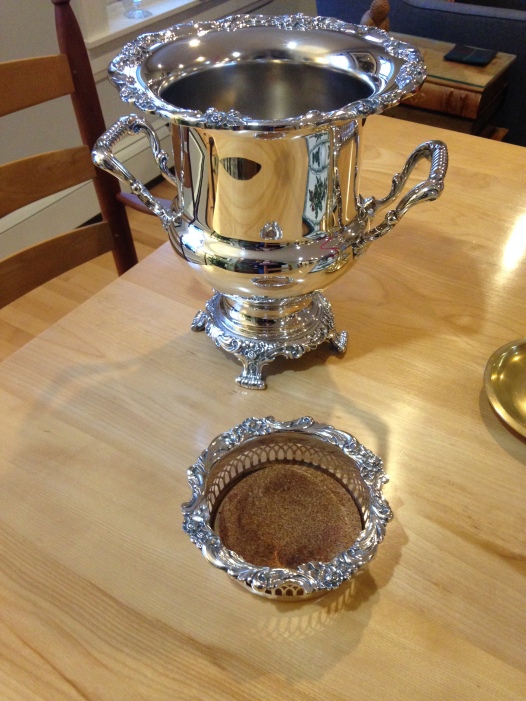 From Fortunoff on 5th Ave. NYC, a gift from my little sister in 1983 when I joined the Foreign Service. It has travelled with me all around the world. 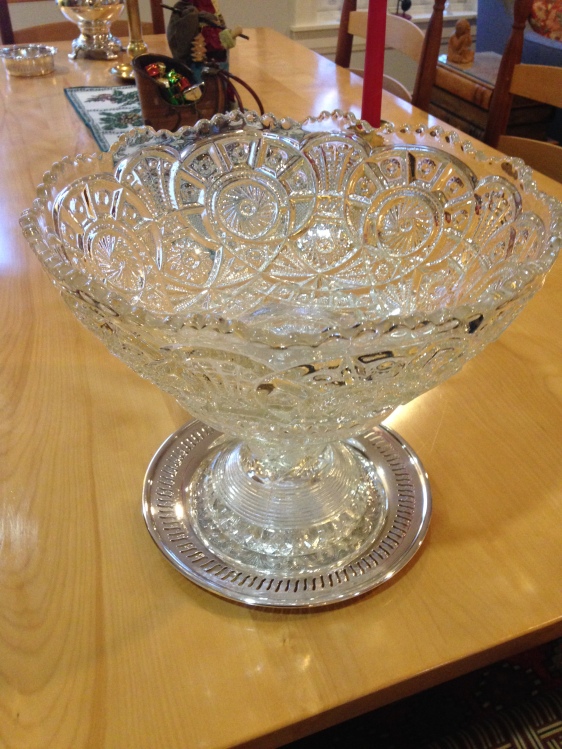 Press glass punch bowl c. 1926, a wedding gift of Will’s parents. It is heavy and festive looking. Will be used for a red wine punch tomorrow for our Christmas Eve party. 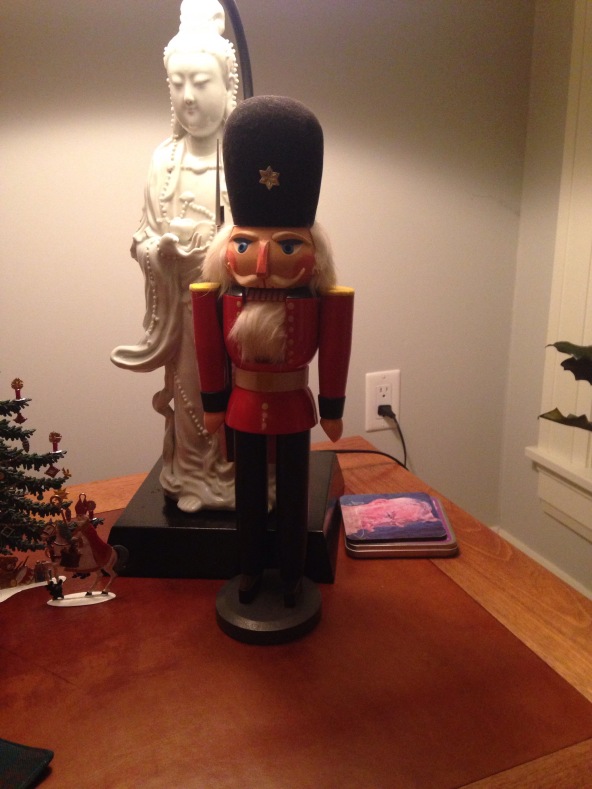 Wood Nutcracker, hand painted made in the GDR (East Germany) 1982. I got him in Ottawa at a wonderful German Deli, now closed, back in those days the shop owners would import the most beautiful traditional German Christmas ornaments and he was in the window.
He travelled quite a bit with us all around the world and always appear at Christmas time. It is difficult today to find such nice wood sculpted Nutcrackers. 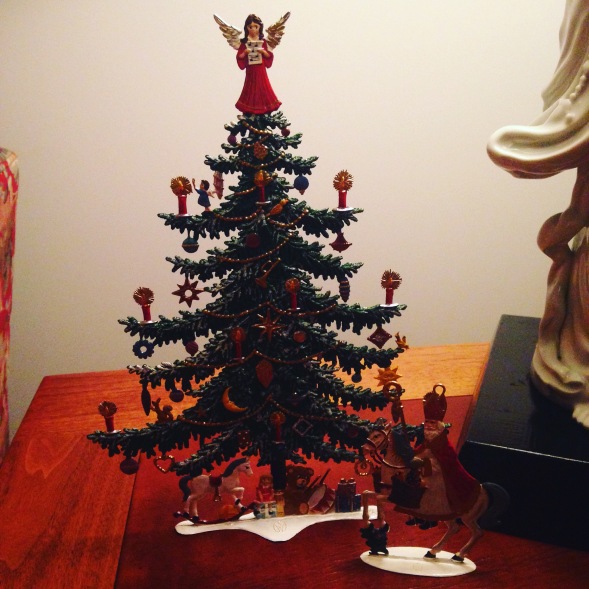 Austrian Tin hand painted Christmas tree and old St-Nick on his horse. We found this in Salzburg while attending the Music Festival in May each year. We use to take the train in Rome and travel up to Austria via the Brenner pass to Innsbruck and then Salzburg. There is a shop in a covered alley with all manner of traditional Tin figurines, it is really an art form made by the Wilhelm Schweizer co. in Diessen, Germany. 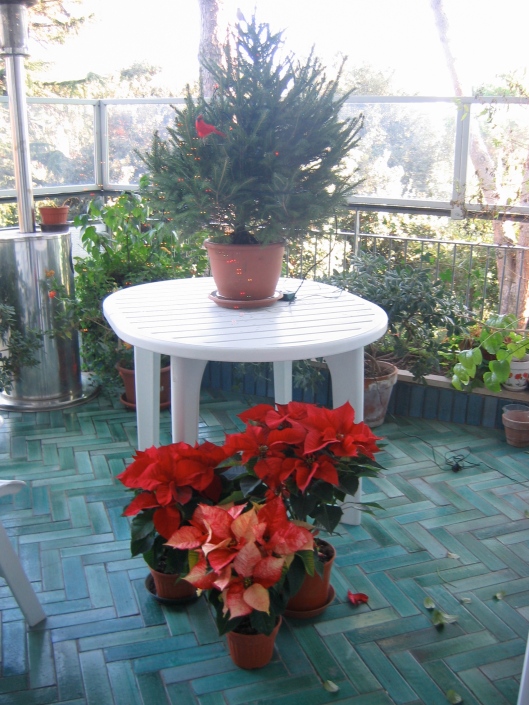 Our home terrace in Rome on Via dei Villini at Christmas time in 2009. We had lots of plants and this area was in a big park with lots of Maritime pines all around. 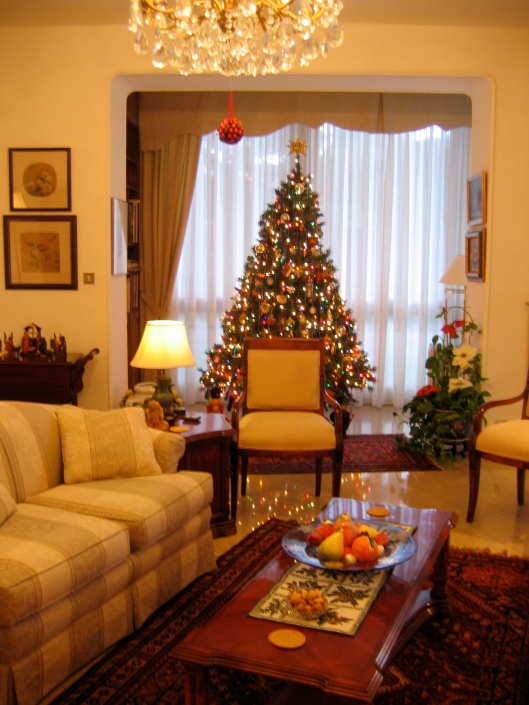 Christmas 2008 Rome, at home on Via dei Villini. Our tree then was 8 feet tall since the ceilings were taller. 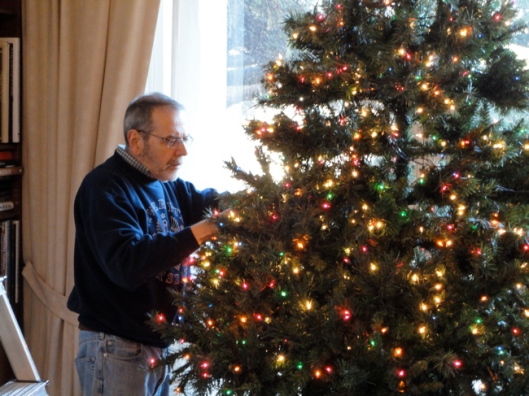 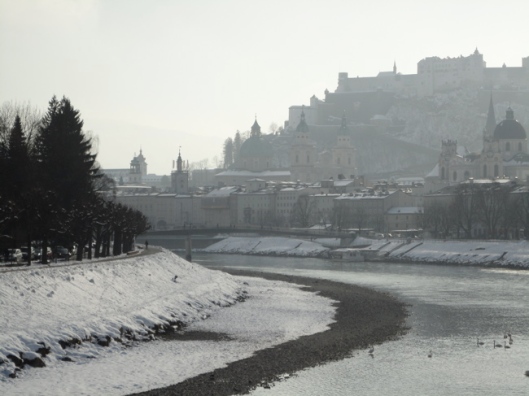 Salzburg in Winter during the Mozart week with the river Salzach and the Archbishop’s castle on the hill, in 2010. It is a very small town and an easy walk.