Today a friend who lives in Rome sent a little comment about his visit to the Villa Borghese. This famous museum only admits 80 persons per hour instead of the usual 300 person per hour due to Covid 19 concerns.

Given the size of the building it must be a delight to be in such a magnificent building with so few people and so much spectacular art work. 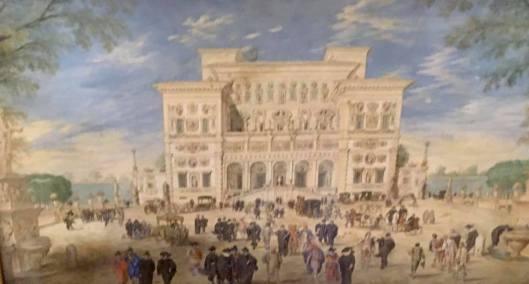 I remember walking in the gardens of the Villa Borghese, something I did many times given that we lived near by, I would go there just to relax and enjoy the greenery. The garden is the third largest in Rome, you can walk for hours all around it. The land was first acquired by the Borghese family in 1605, located on the ancient site of the Gardens of Lucullus, 60 BC, just outside the city walls built by Marcus Aurelius you can enter from the top of the Spanish Steps turning to the left or from Via Flaminia or at Porta Pinciana which was closest to my home. In Cardinal Scipione Borghese, nephew of Pope Paul V, bought the land in 1605 it was mostly a vineyard and covered a large area slopping down the Pincian Hill towards the Porta del Popolo and Via Flaminia. Today the vineyard is gone but was replaced with formal gardens in the French Style by Cardinal Borghese and later in the 19th century an English romantic gardens with ancient ruins, lakes and fountains was created giving the place an atmosphere both peaceful and serene.

Such huge estates acquired by noble families were used mostly to escape the city in Summer and many had large villas or palaces built within, such homes all have the one architectural features which is a roof top terrace to catch the evening wind coming off the Mediterranean sea towards Rome. This feature we enjoyed while in Rome dining on our terrace watching the ballet of small bats amongst the Maritime Pines.

Villa Borghese in Italian refers to an Estate and not to a building per se. In fact Cardinal Scipione built the Galleria Borghese which looks like a large palace simply to house his art collection so he could sit in various grand rooms and admire the works of art while having lunch or entertaining friends with music or discussions, it was not meant to be lived in. He would spend a few hours at the Galleria and then return to his home in the City. The family left its mark on Rome, his uncle Pope Paul V Borghese’s name is inscribed in bronze letters above the main entrance of St-Peter’s Basilica, he commissioned Bernini to do many works of art and architecture to enhance St-Peter’s and the semi-circular colonnade of the famous Piazza.

One of the magnificent rooms of the Galleria, your eye is drawn to look everywhere at once, it can be overwhelming.

On the grounds of the Villa Borghese you can see other large buildings, built for the 1911 World Expo, one today is known as the British School of Rome, the other is the Galleria Nazionale D’Arte Moderna with works from the 19th to 20th century. Both are formal and grand buildings in the Beaux Arts style. The Silvano Toti Globe Theatre is a copy of the Globe of London and presents Shakespeare’s Plays in Italian.

I always enjoyed this park, it is formal and relates to the history of Rome from antiquity, the vistas are enchanting so much so that Ottorino Respighi was inspired to composed the music entitled The Pines of Rome and I can see why.  Though Rome surrounds the gardens nowadays, it is very peaceful and quiet once you enter it.

View of the lake and the temple to the God of Medicine, Asclepius

Formal entrance from Via Flaminia, the gates speak of the grandeur of the Borghese Family with their coat of Arms and the Griffon and Eagle. The gates are closed at night. The Villa Borghese since 1903 is a public garden maintained by the City of Rome. The Borghese Family continues to this day, with assets in cosmetics, real estate, and other business lines with properties in Italy and in the USA.