Well we returned yesterday from our week at the Beach House Inn at French River near New London PEI where we rented a cottage. It was delightful and sooooo peaceful compared to the noisy Capital. Surrounded by woods, fields, red sandstone cliffs and the beach. Only the birds and a family of Foxes for company, we were the only guests on the property. The birds are interesting, from eagles to hawks, cormorants to blue jays, swallows, robins, warblers, quite the variety.

The Fox family was a mother and her 4 kits, very tame and unafraid of people though they always keep a respectful distance.  The property was beautiful and very well maintained, the main house had 7 mature Linden trees on the West side, a big marsh full of water reeds on the East side of the property and on the hill the famous Cousin Family pioneer cemetery known as Yankee Hill. The Cousin family were French Huguenots who fled France ended up in the American colonies and at the revolution came to PEI fleeing again the chaos. The were probably wealthy if one looks at their elaborate white marble tombstones. In September 2019 the hurricane Dorian came to PEI and devastated the area around Cavendish where 70% of the trees were damaged. This old burial ground is in a forest and many of the poplars toppled. Luckily none of the 200 year old tombstones were damaged, a miracle of sorts. Across the road to the beach stands another old cemetery called Simms, this one is dedicated to the 200 sailors who died in the historic storm known as the Yankee Gale in October 1851. Our view was the sand dunes and the beach and it’s small lighthouse, the New London Rear Lighthouse nowadays surrounded by a large marsh. It is automated like all light houses. The waterway is treacherous, large ever moving sandbanks at the entrance to the South West and French River, both leading to small fishing harbours. The surrounding countryside is picturesque, lots of farms cultivating wheat, potatoes, mustard and corn. The area was settled after the Acadians where deported and their land confiscated by the British around 1755. The new settlers were stern Protestants, Presbyterians and Anglicans. Some of the Acadians did come back after 1763 and settled further West on the Island.

This year of the Pandemic there are virtually no tourists, the only people who can actually come to PEI are from the other Maritime provinces and they do not need to isolate. Anyone else would be automatically forced into 14 day isolation upon arrival and people are watchful.

Some good seafood restaurants and art galleries in the area. The beaches are very clean and quiet. We could actually walk from our home to Cape Tryon and its Lighthouse an 8 Km treck along the cliffs, very beautiful scenery. It was a good staycation just to get out of the noise of Charlottetown.

The Linden Trees at the Beach House Inn. We could say we were unter den Linden. 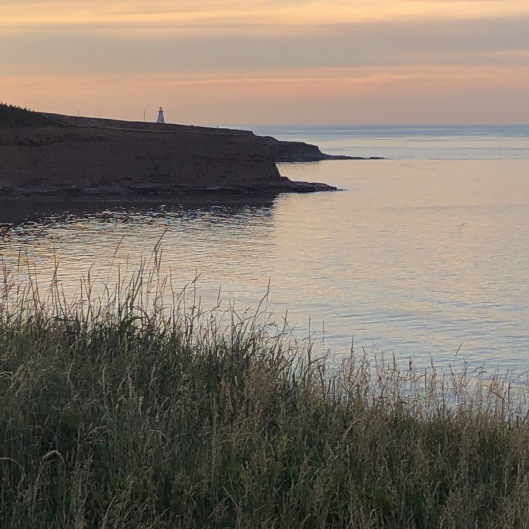 Sunset on the cliffs at Cap Tryon, with the lighthouse. In terms of direction looking out into the Gulf of St-Lawrence, towards Anticosti Island and Newfoundland.

Truly peaceful away from it all. You come to appreciate the silence.

8 thoughts on “Return from Staycation”