Before 2014/15 I was blogging on Blogspot, then something happened one day and I was no longer able to blog on Blogspot. So I migrated to WordPress.com

I old blog is still live and can be found at  larrymuffin.blogspot.com

Lots of pictures etc. I am going to try to do a look back to those years prior to my retirement and our return to Canada.

I joined Facebook in 2008 and never really liked the concept or the way discussions took place. Someone said; Facebook is where you argue with perfect strangers and trade insults. FB is also a place where people post things with little understanding of what they are posting and in many cases involving social or political issues, it is false and misleading. I am also tired of reading stuff about Trump or the USA. It’s not my country, I do not vote in the US Elections and for me it is a foreign country like any other. So I do not care and I am more interested in what happens in Canada where I live and am a taxpayer and voting citizen. We have serious issues in Canada to deal with and that is quite enough for me.

I have also grown disenchanted to put it mildly with the level of Civic Illiteracy amongst people in general who do not understand how our Canadian Parliamentary system work,  how our various levels of government function, from Municipal, Provincial to Federal, it’s not all the same and each have separate powers and jurisdictions. Same for our judicial system, imagine having to explain repeatedly that our judges are independent of political machinations, giving out judgements based on how the Law is written and being mindful of our Constitution and the Charter, many simply do not understand this basic concept.  If this has to be explained each time an issue surfaces, well in that case, we have a serious problem. FB is simply not a good medium for any adult discussion. There is also far too much bait and switch coming from the media.

I am also tired on FB and on Instagram to a lesser extend with all the hatred and awful comments from people who imagine that they have a right to make a spectacle of their ignorance and be proud of it or who belong to extremist groups and think they have a right to insult freely, a dangerous thing to do on PEI with our little population of 150k or Charlottetown at 36K.

So I am stepping back from FB, enough is enough and I am not in the mood to discuss with people who are only concerned with themselves and ME,ME,ME why the world is not obeying their selfish wishes.

I have had a blog now since 1998, it started with LiveJournal, then it migrated to Blogspot and now WordPress. Readers know that my blog is a personal journal of the many things I like, from food to travel, to music, various topics on archeology, history, art and culture or simply on books I read or reminiscence of things past. I can actually say I remember the 1960’s it is sort of scary but hey its a fact.

Blogs are a way to express yourself and discover what other people think or how they feel. I have made long distance friends on my blog, pretty much like my life a long distance story over decades in many countries. To me this is a much better place than FB any given day. 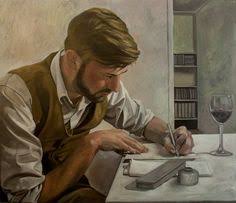 I chose this painting of a writer because the subject is left handed like me.

Yesterday I wrote that JP’s blog had disappeared and was wondering what had happened. I am not the only one who was wondering. Tonight after dinner I looked at my blog and saw of all things, a comment from JP. Very kind of him to have left a comment and much appreciated. Here it is for all of you to read.

Dear Larry
I also saw Steven on Blogger posted a blog about my blog’s “demise”. I really do hope you’ll direct him, and those other people on other blog platforms who left such lovely comments, over here to your blog. I tried to leave a message on his site but couldn’t. I don’t think WordPress and blogger will cross over in that way.
Let me explain.
I started my blog in 2015. I haven’t written about this before but at the time I started blogging, my husband Guido had been diagnosed with a rare form of leukaemia. I wrote as a weird form of creative escape. Not from my husband, but the circumstances we found ourselves in. It made me SO angry! But it also gave me a lot of energy. I read a lot. I wrote a lot. And, I discovered all these amazing people writing such terrific blogs. Yours, the lovely Will, and many more over the years.
On my blog I opened the door to our lives so that everyone could read about love, chaos, gay life, recipes, and our own type of madness. I wanted others to come to a blog where nothing horrible happened. It would be fun, a laugh – an escape, just as it had been for me writing it.
5 years on? Guido is stable. Not cured, but stable. My interior design business has taken off. We have 2 restaurants. Busy awkward and difficult lives. And rather than blog numbers going up – they went down. But… As a result of my blog I’ve started writing for a magazine. We move on. As we all do. Who knows what will happen in the future.
A few days ago I tried to archive my blog but accidentally hit the delete button! Thankfully I still have my writing as a personal record but it’s gone from on line. I’m sorry about that. But, perhaps it was meant to be? In a clogged up blogshere it makes a space for others to write about their lives.
Steven said that reading my blog gave him hope that he too might one day meet a wonderful man and fall in love. Goodness. What a wonderful epitaph Itsmyhusbandandme.wordpress.com will be when that happens. Not if but when!
I give a special shout out to Anne Marie. My online sister. I love your passion.
Larry – good luck and love to you and Will. Keep blogging.
JP x

JP in London wrote a blog called MyHusbandandI , the husband was Guido a chef and they lived above a Café in Southwark. JP it would appear deleted the whole blog and it has disappeared as if it never existed. The last post a few days ago was about him not being able to write more often, he was, he said working out of town but was back now.

This is unfortunate, his blog was interesting and well written. Really JP I think you should have said goodbye.

For some time now I have been reading The Gentle Author who has a blog on an area of London I do not know at all. When you travel to London usually travellers will stay in an around the famous spots and those widely known around the world and miss out on the equally fascinating but not well known unless you happen to live in the Capital and have all the time in the world to explore.

The Gentle Author specializes in unknown places of London but once you read about it you want to see for yourself. Recently he was re-publishing stories he had written about people in the East End of London around Spitalfields, Bethnal Green, Shoreditch, Stepney, a cosmopolitan area of the City, poor and not necessarily affluent. However by reading The Gentle Author  one understands there are lots of treasures to see and appreciate outside of the well trodden path.

Recently there was the story of Malplaquet House a Georgian house at 137–139 Mile End Road, Stepney, London. The four-storey house was built as one of three in 1742 by Thomas Andrews. Here is the link to his blog:

On 22 October The Gentle Author wrote about the Dead Man of Clerkenwell, a fascinating story and well worth reading, do have a look. He has also written books on topics of interest to him, his most recent on Facadism the modern way of saving historical facade of buildings but demolishing everything else behind. Canada is not spared this architectural fashion. Think of Sherbrooke Street in Montreal in the area of the Musée des Beaux-Arts. Or in other cities like Toronto where giant condo buildings are built behind or on top of much older buildings who are dwarfed by the modern additions.

I find his blog has a way to make you think of what is around you and appreciate it more.

I have another blog which is completely different from Larry Muffin. I created this blog for my campaign for municipal office. The topics are specific to issues in our City Charlottetown.  Here is the link if you are interested. 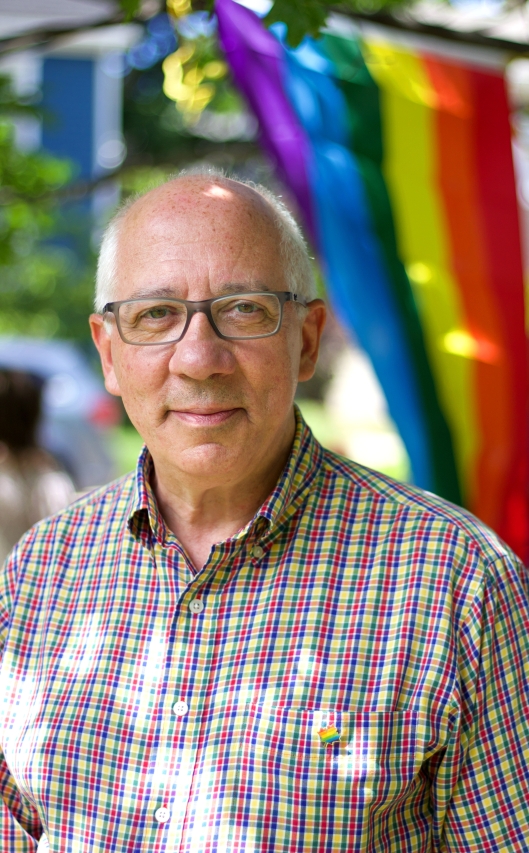