I do daily trips to the grocery store or superstore as we call them here for household / kitchen needs. Thursday I did my regular shopping and noted nothing in particular in the store despite mounting alarmist news by our Canadian Media, the bait and click gang.

However Friday 13 March was a very bad day with numerous news conferences from the Prime Minister who confirmed his wife Sophie was sick and he was self-isolating himself, to the Quebec Premier announcing draconian measures, at that time Quebec had 17 cases, no deaths, as of tonight they now have 24 cases, all related to people who travelled internationally. Quebec has a population of 8 million people. Ontario announced it was closing schools for 2 weeks and Quebec followed suit. Ontario had 101 cases, no deaths. Ontario has a population of 14 million. The National Capital Ottawa, a city of 1 million people has 5 cases. In total Canada has 195 cases now and one elderly person with pre-existing conditions died 8 days ago in Vancouver.

So far the Canadian Government has refused to close the borders, the Minister responsible explained that when you do that people are a lot less honest about telling you where they were or travelled to.  In PEI like other provinces anyone returning from abroad will have to self-isolate for 14 days. So far it is happening and people report to the Health authorities.

So given all this shower of bad news, Friday night was shopping at the zoo for most people. In PEI like elsewhere the coveted toilet paper has become a fetish, bottled water is also a very big thing. Aisles are cleared of such items.

So today, Saturday  at the grocery store, please note that all our supplies, food and otherwise come from the mainland by truck over the sea bridge, except for meat and potatoes. The grocery store was well stocked and re-stocked from Friday’s onslaught. I did notice that everything is available in meats, fruits or vegetables, milk, eggs etc. What I could not find was the Lysol towelettes with bleach, large bottles of bleach, 28 rolls or larger packages of toilet paper and large packages of paper towels, the 12 roll size. Otherwise everything else was stocked and appeared un-touched.

Available were smaller size toilet paper packages under 8 rolls, all liquid cleaning products, soap hard, gel or liquid. Kleenex in quantity, small bottles of bleach for regular house chores. So why are those products available but not the other. What kind of priority is that, bigger is better?  Now there was a couple in their 50’s man and wife discussing the value of buying the really big bottle of bleach. Wife was ambivalent, husband really wanted it, wife finally says; oh well we will try to find a use for it all, it does not go bad. So they bought it but obviously they would never buy it otherwise. Some old lady in her 80’s bought 40 rolls of toilet paper and nothing else. Watching her I wondered what was she thinking, especially if she lives alone.

We are told to wash our hands constantly, soap and water not hand sanitizers. The hand soap was plentiful and appeared to be ignored by the shopping public, how strange. Hand Sanitizers on the other hand are gone, supply exhausted and since this come by truck I can see it will take another 15 days before a new shipment arrives given the demand.

People appear to believe that sanitizer gels, because of the alcohol content is a superior magic cleaner. I also noted that many people despite the clear health instructions given to us by various medical professionals and the Health department is not really followed or understood. People prefer the pundits who predict the end of the world, that is more fun or sexy, despite the fact that journalists have been misunderstanding the information received, if one listens to the questions asked at press conferences with health professionals.

In the meantime here in Charlottetown and across the Island all public events big or small are cancelled. Everyone is hoping that in 6 weeks by the end of April the whole thing will have blown over, I am not so sure. 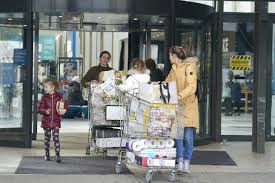 Italy has been hit very badly by COVID 19, the number of sick and dead amongst the elderly population is staggering, 60% of sick people are over the age of 60 and 100% of the dead are over 80 yrs of age. The Government in an effort to control the spread of the virus has ordered people confined to their homes. But those dear Italians are resourceful, people all around Italy organized themselves to sing from their balcony or windows or terraces in the afternoon at 6pm each day in an effort to socialize with neighbours. Italy gave us the Opera more  than 400 years ago and so it is normal to sing in times of joy but also of great stress.

I know that friends living in Italy have told me that they will sing this afternoon Azzurro and on other days Volare will be sung, etc.. The idea is to sing a song that is well known and popular with everyone, Italy has lots of those. Here is Adriano Celentato singing Azzurro.