Well 20 cm is a little over 7 inches and this is what we are getting today, big fluffy white stuff. The temperature yesterday was the coldest it has been in PEI for 105 years which is highly abnormal for us. Next week we should be back to our usual -2 to -5c daytime temperature.

This being a Sunday, people have an excuse for not being open for business after noontime and the visibility is not good on the roads. 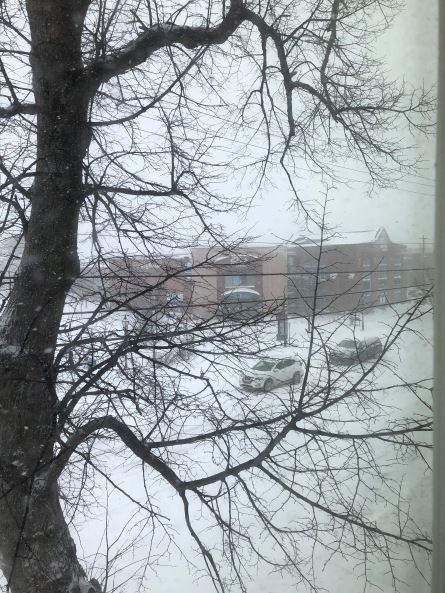 Yesterday we went to a friend for a 6 hour marathon viewing of Wolf Hall the 2015 series on the time of Henry VIII and his Minister Thomas Cromwell, a very well done historical drama. Our friend has the most beautiful mansion, I counted 5 double fireplaces in the house which is located in Keppoch with a large lawn giving unto water and the entrance to the Strait of Northumberland. Every ship entering the Hillsborough river and Charlottetown passes in front of his house. The other side is the ruins of Fort Amherst and Rocky point, what they call a million dollar view, sea, forests, rocky shores and sky.

So while we were at our friends the news came of the final arrangements between the Royal Family and now Harry and Meghan. As I suspected all along and knowing how in such matters you cannot win against the Crown, the settlement is pragmatic and no nonsense. It is not what Meghan had hoped for and Harry knew the limits of what could be achieved, after all he was born into this Familly. I had a first inkling of what would happen when the Queen issued her statement after the family meeting at Sandringham, HM spoke of Her Family and of Harry and Meghan not of the Duke and Duchess of Sussex. To my reading of this statement HM was saying you are part of the Family and always will be but here for you but we part ways now. The next day it was announced quietly that Frogmore Cottage (not house) was being closed down and staff had been re-assigned to other palaces, only a caretaker living at the house will remain.

So the final settlement is giving up on Royal Titles and styling, no more HRH for either of them. No more Royal military appointments for Harry who was Captain General of the Royal Marines, no more engagements on behalf of the Crown, money is being cut off though Harry may still get some financial support from his father. They will spend most of their time in Canada, though this is a problem in terms of taxation and immigration, I presume the Government of Canada through the Minister of Immigration may extend a special residence permit to them. They cannot immigrate to Canada because they do not meet the basic criteria of University Education and French language skills, they have no employable skills for our job market, being an ex-soldier is not considered a skill in demand and being an actress is also not in demand. They will also have to repay Grandma for the 2.4 Million pounds she spent on refurbishing a few months ago Frogmore Cottage. Their security will also be downgraded to possibly one officer or no security. The Government of Canada does not want to get involved because of the backlash from Canadians on money issues. We are talking of about $3000. CDN dollars a day for both of them which is peanuts really in terms of government spending.

They will have to find a way to make money on their own and support themselves. Yes Harry has money of his own and so does Meghan but that is not going to last forever. With no Official role anymore and a downgrade in their status, how long will the magic last? Once you are a nobody who cares? Or if they take on the lifestyle of celebrities, the media will be like vultures around them. Is that what Meghan really want? There is also the question of the British citizenship Meghan was supposedly working at getting, now that is also up in the air, you have to live in the UK to get citizenship and she does not want to live there.

Who will be their support system in Canada? Meghan claims to have friends due to her stint in Toronto but can they continue to depend on the good favours of friends? Does Harry have any friends in Canada? No, no one. It is a big step down for him and he will experience difficulties in getting accustomed to mere mortal life. The Markle family has started to talk to the Media again and lots of ugliness will come out, including that ill advised lawsuit against the Media, her father wants to testify against her.

I just have a feeling that this is not going to end well. They may find they will have more difficulties than first imagine. As Harry said; this is a leap of faith. Or do they want to spend their life pushing products on SussexRoyal.com, it all sounds tawdry. A sad situation to say the least. Just now the Palace has announced that in one year’s time the situation will be reviewed, it’s an open door for them, maybe they will come to their senses.  In closing this situation cannot be compared to his great uncle Edward VIII and Wallis Simpson, they clung to the titles and honours desperately  and wanted to keep the lifestyle which is the opposite of what is happening now. Though the Duke and Wallis found out quickly that their lives were quite boring and lonely despite the notoriety.