Another beautiful quiet sunny Sunday morning. Listening to Marc Hervieux who is a Canadian Opera singer and he has his radio show on Radio-Canada.

This morning he was playing this Italian song Parlami d’amore Mariu.

On a hot muggy Summer day when a thunderstorm is possible, we need light music. Emmanuel Chabrier composed Suite Pastorale in 1888.

Between 1881 and 1888 Chabrier orchestrated Idylle, Danse villageoise, Sous-bois and Scherzo-valse to form the Suite pastorale. The suite was first performed on 4 November 1888 by the Association artistique d’Angers conducted by Chabrier himself. These four pieces are taken from Chabrier’s composition for piano of 10 pieces called Pièces pittoresques composed in 1881. 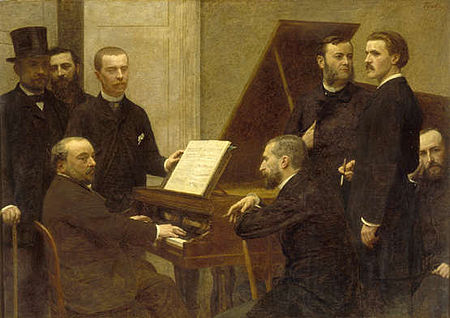 Music by J.S.Bach adapted from Hymns.

In the mid-1990 I became interested in Dresden in the province of Saxony, formerly East Germany. We visited Bach’s city Leipzieg also in Saxony, which is a worth a visit for the music and the art. However Dresden is a miracle or re-birth and to see it today you can only be glad that the people of Dresden had the vision to resurrect their city from the ashes of the Second World War and the utter mismanagement of the East German Communists.

We followed for many years the reconstruction which has been on-going for 30 years and one spectacular example is the Frauenkirche in old Dresden. A Lutheran Church built originally with donations by the Lutheran community of Dresden in response to the King August the Strong who wanted to become King of Poland but had to convert to Catholicism to do so and built a Catholic Cathedral next to his palace.  Saxony is a very protestant state and Martin Luther had a strong influence at the time of the Reformation.

The Frauenkirche now has on a weekly basis on YouTube short concerts from this magnificent baroque church built by Georg Bähr the great master architect of the Baroque era in Germany.  The video shows the interior of the church and you can hear the great organ. Think that after February 1945 this church was nothing but a pile of rubble.

If you ever have a chance to visit Saxony and Dresden, it is well worth it. For those who love fine porcelain the city of Meissen, which is minutes away is the historical centre of porcelain making for Royalty all over Europe.

When things look dark, I look to the age of the Baroque (1600-1750) and I think of Georg Frideric Handel (1685- 1759) born in Halle, Brandenburg. He worked for the Prince Elector of Hanover who would later become George I of England. In England he worked for the Duke of Chandos and Queen Anne. On the accession of  George I, his old patron re-hired him. His career as Court composer continued with George II & Queen Caroline. He lived at the same time as Frederic II the Great (1712-1786) in the Age of Enlightenment. It was a golden age for the Arts, Music, decorative and architectural style, an age of Princes who promoted their Court by encouraging artists and musicians. Handel was one of many popular, talented and well known musician of the time, Princes invited him to come and work for them.

The month of May marks the 100th Birthday of the wonderful singer Peggy Lee. Someone with such a beautiful voice, singing these great songs so love by the public was born in 1920 in Jamestown, North Dakota. Her maiden name was Norma Deloris Egstrom, the seventh of the eight children of Selma Amelia (née Anderson) Egstrom and Marvin Olof Egstrom, a station agent for the railroad. Her father was Swedish-American and her mother was Norwegian-American.

Peggy Lee was a great Jazz singer and so many of her songs stay with me, I love listening to her voice. They represent an era in my life between 1967-1980, and I associate them most with Montreal, my native town. Like so many artists of the 20th century, she embodied something that can only be remembered if you lived through that time.

Such a sophisticated and stylish Jazz Singer, songwriter, composer, and actress, a career spanning six decades. From her beginning as a vocalist on local radio to singing with Benny Goodman’s big band, Lee created a sophisticated persona, writing music for films, acting, and recording conceptual record albums combining poetry and music.

Is That All There Is

The Jazz Story – Tea For Two

A happy song because we just need it with all the choppy water around us. Nat King Cole one of my favourite singer with a song which brings back great memories. Walking My Baby Back Home on Capitol Records.

Unforgettable is my signature song, my song for sure. This music brings a big smile to my face. God knows we need smiles and sunshine now more than at other times. This will past like everything else but it is a difficult moment for us all. So this music helps me. Stay safe and in good health. Spring is upon us so it cannot be all bad.

On this Mardi Gras I was looking today at a documentary on the Château of Choisy-Le-Roy near the town of Choisy, this music was the background.  Concerto Comique no.14 La Choisy composed by Michel Corrette 1707-1795, who held many posts at Court and was a teacher.  These two pieces would have been composed for the Hunt, La chasse aux Cerfs which was done on horseback and packs of hounds. King Louis XV was an avid hunter and the woods of Choisy was his private domain. He did not like Versailles much and found life at Court tedious and boring with all its Official Protocol.

Unfortunately the Château and the domain were sold at the revolution and today nothing remains. Choisy in the last 30 years has made great efforts to save the park for the municipality and create public spaces on what was the domain. A rebuilt train station sits on what was once the grounds of the Château.

At night I like to listen to music on Radio-Canada from Montreal. I find it relaxing.

At dinner we will listen to Stanley Péan who host Quand le Jazz est là, who presents a variety of jazz following the great names and their music. Afterwards after 9pm is the classical music which is adapted to that time of night with Marie-Christine Trottier hosting Toute une Musique.

Tonight its the music of John Field.

Field first studied music at home with his father and grandfather and afterward in London with Muzio Clementi, under whose tuition, given in return for Field’s services as a piano demonstrator and salesman, the boy made rapid progress. In 1802 Clementi took Field to Paris and later to Germany and Russia. Field quickly secured recognition as a pianist and composer and in 1803 settled in Russia, becoming for a time a popular and fashionable teacher. He played extensively throughout Europe during the next 30 years and had great success.

Field was one of the earliest of the purely piano virtuosos, and his style and technique strikingly anticipated those of Chopin.