Well today was the 25th edition of the Pride Parade and it was big. Everyone is in it, families, grand-parents and grand-kids, politicians of all stripes, the Armed Forces, the RCMP, the local police and just plain people, all celebrating and having fun. The parade is one of the events of the week of celebration all around the Island and here in Charlottetown.

The parade snakes around the downtown core through residential areas and people are 5 row deep. Remember this is a town of 36K, so not a big place but PRIDE makes it big.

We had a great deal of fun at the Parade today and saw so many people. At the end of the Parada there was a party in one of the city square and the Premier of the Province said a few words. Live music with local artists and just a nice time in the shade.

This Island has come a long way in 25 years and it is amazing. 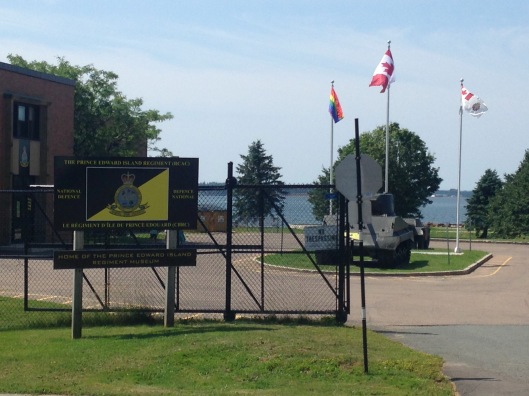 PRIDE Flag at the PEI Regiment base

The Canadian Navy with their float

The orange theme float of the NDP (political party) the leader is holding a Pride flag with the smily on it. 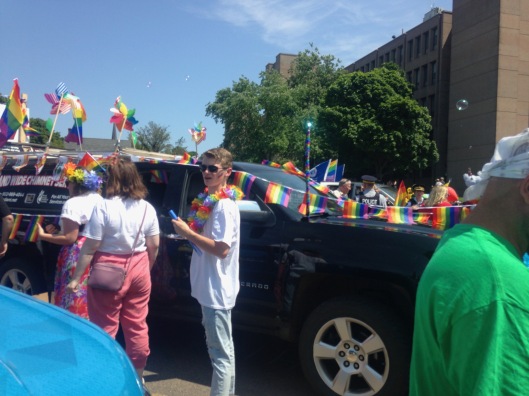 Some young conservative who had T-shirts with the letters PC (progressive conservative) in rainbow colours.

Lots of Unicorns at this parade. 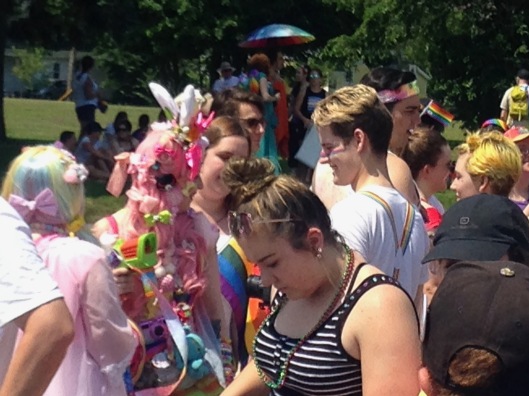 This is S. my videographer during my campaign with his girlfriend dressed as Ms Kitty, she has a big following on YouTube, such nice people.

Grafton Street, it was 27 C in the Sun today but a nice breeze was blowing. 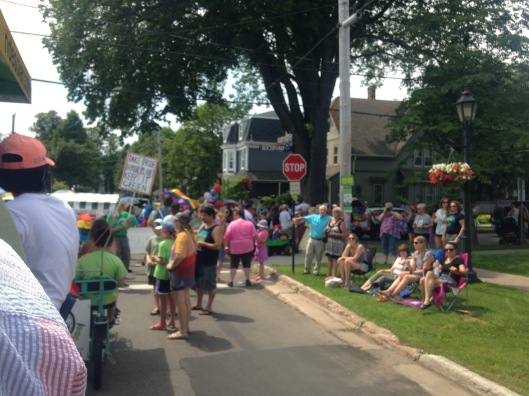 Everyone wearing are with the Green Party, the Official Opposition in the Provincial Legislature. The Greens have had a pretty good start since the election passing some important bills on reduction of Carbon emissions to 1.2 megatons by 2030 instead of the Paris agreement of 1.4 megatons. This is why a minority government is a good thing, gets things done. 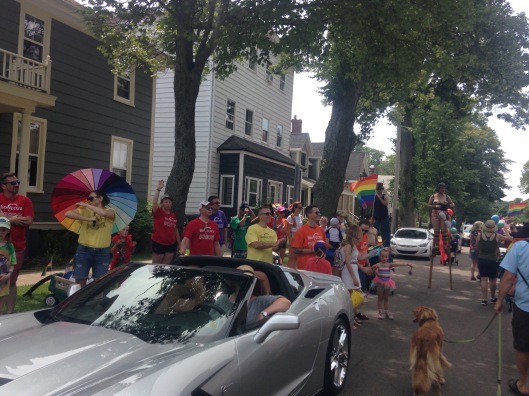 The parade certainly had all the colours of the rainbow and then some. There are no big floats like in other cities, it is just local people celebrating, all ages and backgrounds. Which makes it fun.

Tonight there is a huge party at the DELTA Hotel in the ballroom. Seems like everyone is going.

June was Pride month and in PEI PRIDE week is 20-27 July with the usual big parade, everyone joins in, it’s the thing to do. 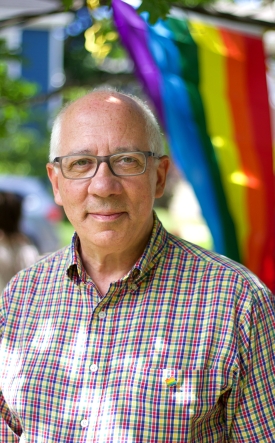 I was in the Parade here in Charlottetown last year and we had a lot of fun. Come and celebrate PRIDE in PEI,  www.pridepei.ca

This year marks the 25th anniversary of the first pride parade on P.E.I. Pride P.E.I. is planning 12 days of events and learning opportunities for Islanders, beginning on Saturday, July 20.

The theme of this year’s parade is ‘shapes + forms’. The organization says love comes in many different shapes and forms. Inspiration for the theme comes from the vibrant spectrum of gender and sexual diversity visible in the province.

For something completely different here is PRIDE TOKYO. Japan has a lot of Festivals and Pride is another one. I love Tokyo, visited the city on 2 occasions for several days each time and travelled in Japan also. Very impressive place, just love it.