We have on FB a site which publishes old photos of PEI and Charlottetown. The author is Earles Picture Restoration PEI. 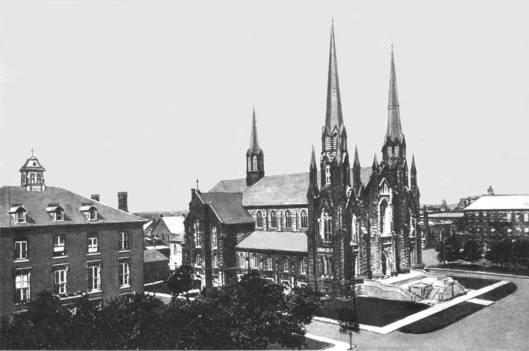 The old Saint Dunstan R.C. Basilica in 1909 before the fire which destroyed the building in 1913.

After the fire, the ruins being demolished. The church was rebuilt.

Saint Dunstan today on Great George Street. The architect was François Xavier Berlinguet of Quebec city. To this day the twin spires can be seen from a great distance.

There is a lot of beautiful architecture in this world, old and modern and then you get the crap that developers impose to make a fast buck by proposing buildings designed by a computer program. Here is one example of decorative architecture which followed a plan, an idea and involved the beauty of art in the Baroque Era. 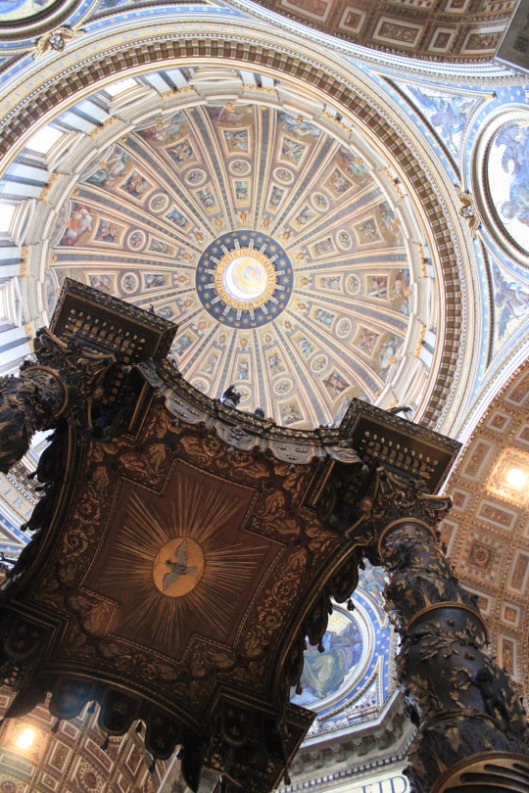 View of the bronze baldacchino of the Papal Altar in St-Peter’s Basilica at the Vatican. The bronze came from the coffered ceiling of the pantheon. Designed and built by Gian Lorenzo Bernini (1598-1680) who was chief architect and decorator of the Basilica with his arch competitor Francesco Boromini.

Truly an impressive monument amongst many in St-Peter. The Basilica is probably the least used church in all of Christendom, used only for Papal Masses and State occasions at the Holy See. On most days it is seen by thousands of tourists and does have the feel of a museum.

The bronze and gilded baldachin was the first of Bernini’s works to combine sculpture and architecture and represents an important development in Baroque church interior design and furnishing. The canopy rests upon four helical columns each of which stands on a high marble plinth. The columns support a cornice which curves inwards in the middle of each side. Above this, four twice life size angels stand at the corners behind whom four large volutes rise up to a second smaller cornice which in turn supports the gilded cross on a sphere, a symbol of the world redeemed by Christianity.

The four columns are 20 metres or 66 feet high. From the cornice hangs a bronze semblance of the scalloped and tasselled border that typically trimmed the papal baldacchino. The structure is decorated with detailed motifs including heraldic emblems of the Barberini family (Pope Urban VIII was born Maffeo Barberini) such as bees and laurel leaves.

There are many things to see inside St-Peter’s Basilica but this one element is well worth looking at in detail. The other part of the Basilica is the ruins of the original St-Peter’s from the fourth century immediately beneath the Papal Altar and the Via Cornelia Roman cemetery which dates backs to Republican times. Entrance to that site is by reservation only on specific days. A fascinating place and the highlight of any visit to Rome.

Some traditions always observed. Here I put the Star on the Tree as the final touch, same 8 point Star we have had for all these years, 37 in all. I think it is the oldest ornament on the Christmas Tree and the least expensive bought at the Dollar store in those days it was called the 5-10-25 cents store, yes we are that ancient and wise.

The Plum Pudding is ready, Mince Meat Pies made, Goose ordered and so is the two Tourtière (meat) pies made of veal and beef with potatoes, carrots and onion, beef tenderloin. I think we are ready and did not have to confront crowds or malls.

As for gifts, well I do not know, I cannot think of anything I want and nor can Will. The Puppies got training lessons, though I do not think that they appreciate this much, being Wire Hair Dachshunds they are very independent minded.

Nora in the sunshine, where is the biscuit?

Small Mince Meat Tarts, a large one was also made.

The Concert of the Tallis Scholars at the Notre-Dame Basilica in Ottawa, over 1100 people attended this wonderful concert presented by ChamberFest. Built in 1848 it is Baroque Canadian Catholic, really over the top architecture. I call it Early Catholic Kosher.

Look at this painting of the St-Peter’s Basilica in Rome. A very famous view of this famous church. However if you look closely you will notice that it is not as it appears today. Something is missing. In this painting dated 1630 we see the two bell towers as imagined by Pope Urban VIII. Bernini was put in charge of decorating the interior of the newly built basilica. Then a new Pope Alexander VII asked Gian Lorenzo Bernini in 1658 to enhance the site as we see it today.

Construction of Saint Peter’s Basilica began in 1506, led by Pope Julius II with Donato Bramante on board as chief architect. Bramante designed the basilica and its dome up until 1513 when Pope Julius died; he was replaced, in succession, by Fra Giocondo, Guiliano da Sangallo, and Raphael. While Giocondo and Sangallo made their contributions, they both died in 1515, followed by Raphael a few years later in 1520.

Next in line to design for Saint Peter’s was Michelangelo, who famously said, “I undertake this only for the love of God and in honor of the Apostle.” Michelangelo decided to build upon Bramante’s early plans. His biggest contribution was the dome that was built atop the basilica in the year 1547. The dome was completed in 1590 and is still to this day the tallest dome in the world, spanning 448 feet. Everyone was quite pleased with the dome but some felt something was still missing, this something turned out to be the infamous bell towers of Saint Peter’s. Plans for bell towers atop St. Peter’s Basilica were drawn up during the reign of Paul V. Using Carlo Maderno’s designs, they had been completed up to the balustrade, the crown of the basilica’s facade. Then comes Pope Urban VIII who is eager to try his papacy’s hand at completing the facade and campanile of St. Peter’s Basilica.

On the February 5, 1629 Bernini assumed the title of chief architect to the basilica of St. Peter’s. “It was in this capacity as architect to the basilica that Bernini undertook the design and construction of his ill-fated campanili.” Commissioned under Pope Urban VIII, Bernini was instructed to design two great bell towers on each corner of Saint Peter’s Basilica with Michelangelo’s dome in the middle. An early indication of Urban VIII’s interest in the facade of St. Peters dates to sketches from 1626 by Francesco Borromini. Borromini was an architect, contemporary, and rival of Bernini. He was also a more experience architect.

Colliding pressure from Urban the VIII to carry out the project to fit his own vision and pressure from Borromini, to seize the project as his own created unstable conditions for the early development of plans for the towers. Pope Urban VIII dies in 1644. Innocent X’s ascension to the papal throne brought with it a general disfavour towards any remnants of the previous Pope and his family the Barberini.

Bernini, as it turned out was a constant reminder of the previous pope’s legacy, a reminder which Innocent X was looking for any excuse to remove. Borromini, the architect who had been working on St. Peter’s yet passed over as Architect under Urban VIII, could not help but lend his expertise on the subject of the problematic bell tower construction.

Borromini eventually convinced Pope Innocent X to take down the rest of the towers as the weight of them created cracks in the whole structure of the facade. The pope was not entirely confident in this decision and may have even had some regrets concerning the demolition of the towers. Remnants of their presence still haunt the facade of St. Peter’s in the shape of low bases that extend the length of the facade to the naked eye. The facade of St. Peter’s Basilica now has the oppressive feeling of excessive width. By looking at the building one senses there is something missing or wrong. Francesco Borromini looses his position with the death of Pope Innocent X.

Gian Lorenzo Bernini is called back by the new Pope Alexander VII who ascends the throne in 1655. He will continue to work for the Pope until his death realizing many other grandiose projects you can see today in Rome.

My question to you dear readers is, what did Bernini built beyond the now demolished bell towers which is such a great visual aspect of St-Peter’s basilica and piazza today? Do you know, can you tell? 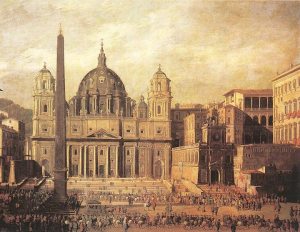 The original St-Peter’s Basilica around 319 AD built by Emperor Constantine. It will be demolished around 1500 to make way for the New St-Peter’s Basilica we see today with the new construction started in 1506 it will continue until 1660. On the image the Vatican Obelisk is on the left side of the old basilica. It was moved to the Centre of the St-Peter’s Piazza in the 16th century.

Sadly, little is known of its origins or which Pharaoh ordered its construction, but it was certainly quarried in Egypt and intended to be erected in Heliopolis. Sometime between 30 and 28 BC the red granite obelisk shows up in Alexandria under Augustus’s instructions to have it erected in the Julian Forum there.
It was Gaius Caligula who had the obelisk bought to Rome in 37 AD. It was the largest non-inscribed obelisk to leave Egypt, at 25.5 m high and weighing an estimated 326 tonnes. The obelisk was originally erected in gardens Caligula had inherited from his mother, and then on the central Spina of Caligula’s circus. Much of the circus is today under the basilica and square, the original spot for the obelisk is near the present-day sacristy, south of the basilica.
Because of the solid pedestal on which the obelisk was placed, it remained standing for 1,500 until it was moved to where it stands today in Saint Peter’s Square. It took thirteen months, between 1585 and 1586 to move and re-erect the obelisk. The idea to move it was that of Pope Sixtus V, as part of his desire to recover and re-erect all the obelisks lying then in the ruins of Rome.