The condo building we live in was built in 1976 in that brutalist concrete bunker look so in fashion back then. The original condo owners, mostly all, lived here until just 5 years ago when many started to die off or move to retirement homes. With their departure many new owners have arrived and all have made massive renovations to their units. Gone is the wall to wall broadloom, the ’70 bathroom and kitchen look with the formica counters and the old style ceiling lamp fixtures. The condo units are fairly nice sizes given that the building was built at a time when people still lived in their homes. Nowadays any decorator or developer will tell you that you will live at Starbucks like in the TV sitcom Friends where they all spent their lives on that couch in  the seedy neighbourhood café, so a condo is the size of a broom closet, but it is called luxurious living. 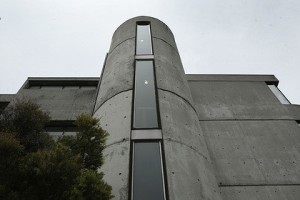 We have two bathrooms in our unit and five long weeks ago the work on the first bathroom started, the work is nearly complete, only the towel bar and the glass partition for the shower is missing, with the 2 drawers for the vanity. Otherwise it is working.

Though the work as gone fairly fast, there were some problems but within a week they were resolved. It is still a trying period and dust infiltrates the whole unit. Despite the fact that the workers are careful and clean up after themselves. Nonetheless dust has a way of getting into everything.

Here is a before and an after look at the bathroom no.1 which lost the tub to be replaced by a walk in shower, new marble floor, new tiles and vanity with a giant mirror. 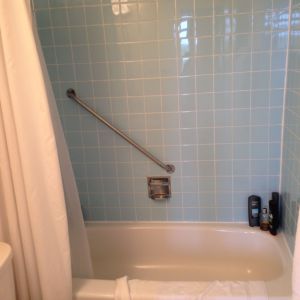 Old bathroom c.1976 prior to demolition. 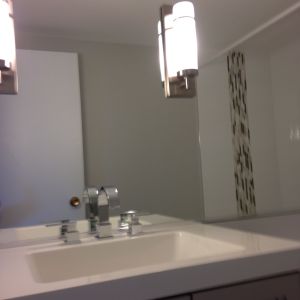 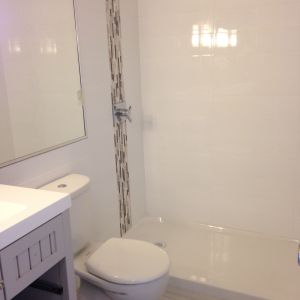 New bathroom with accent tiles and that huge mirror. A very different look. The walls are pearl grey which is quite elegant.

Now onwards to bathroom no.2 which will have a soaker tub and shower. New tiles similar to the ones we have in bathroom 1.

Hopefully this will only take, oh I don’t know 3 weeks and then we are done.

Since we moved back to Ottawa from Rome that fateful July 2011, we have been living in a very nice condo complex on the Rideau Canal. The building is somewhat like a private club, all the neighbours know each other and we greet and chat all the time.

Our landlord has made many improvements to the unit and it is a pleasant spot. Last month he announced that he wanted to completely redo the two bathrooms updating them from their 1976 look when the building was originally built on the site of what had been a neighbourhood school in the centre of the city.

All went well until we met the decorator, a women in her 60’s smitten with the Gluckstein concept of hotel living and ideas she picked up on a tourist junket to China. Unfortunately for us she fails to listen to anything we say and her ideas are off the wall. Good for an hotel but not so good for a home. She firmly believes that no one lives at home but at Starbucks. She is against space to store things, closets etc, who needs storage space. The owner listens to every word she says as if she is a prophetess of ole. She is also very disorganized and fails to see problems until we are stuck with them. We are into week 3 of a simple bathroom renovation, we are hopeful this week will be the last and we can move to the other bathroom.

We also need to repaint the unit, we had to dismantle quite a lot of things to make room for the renovations and with the dust etc. this became apparent. However the owner is non committal now on what will happen when our lease expires. As much has we would hate to move after 5 years it may happen in 2016. I find the whole exercise tiring and tedious.

Here are some in process photos.

What use to be a standard bathtub and vanity is replaced by a walk in shower and mirrors, new lights and better ventilation.

ready for tiling on Monday morning. He should go fairly fast now since all the tiles are in and the workers have been most efficient and nice.