We arrived in Dublin on schedule and proceeded to O’Connell Street to the Gresham Hotel. Will chose this hotel because it is featured in the short story The Dead by James Joyce. The hotel is steps away from the General Post Office or GPO where the Easter uprising of 1916 took place, Patrick Pearse proclaimed the Irish Republic before being arrested and then hanged by the British with the other leaders of the Uprising. This year being the Centennial of the Uprising which lead to the Irish Republic being established, a wonderful exhibit in the GPO can be seen, it is very well done and dramatic. The British in trying to suppress the uprising where ham fisted and showed no mercy and this is were they made their fatal political mistake. The Irish population rallied to the ideas of the patriots and Britain conceded to the Irish after 400 years of misrule. Everywhere in Dublin there are reminders of the Easter uprising of 1916.

I had visited Ireland with my parents in 1969 but did not remember much of that trip. What struck me at first was how similar to PEI the Irish Republic seems to be. Same street names, Grafton, Euston, Great George, etc. The food both seafood, beef and cheese similar to PEI. Music and culture well with our large Irish population on the Island there are lots of similarities with Ireland.

During our visit of 10 days we had several days of wind and rain, though the rain is often misty and not a downpour, though that can happen. No wonder everything is so green. The weather does not stop people from going about their business and the streets were full of people.

Dublin as a city is very cosmopolitan, Spanish and Italian are heard everywhere in the centre of the city. The service industry is dominated by Poles, French and other EU citizens. Ireland is coming out of a period of severe austerity following the economic crash of 2008. There is hope that now that the worst is behind them, life will get better, though there are signs of work unrest and discontent in the population.

We walked quite a lot and went to Trinity College to visit the Book of Kells, which are the four Gospels.  What was of interest to me was not so much the actual Gospel pages on display but the whole story around the making of the Gospel books, the illuminations of the pages, the ink made from metals mixed with natural oils, grounded semi-precious stone powder, flowers and excrement of small molluscs and vellum parchment made from calf skin, all of it complex and requiring a lot of careful work.

The books written in Latin are 1200 years old and it is a miracle they survived wars, fire, the Reformation and vandals.

We also took a tour of Trinity College which at the time of our visit just about to start the Academic year. The University was built on land Queen Elizabeth I received in inheritance from her father Henry VIII in 1592. The land originally housed a monastery and the square with its clock tower was the monks cemetery. Trinity has had its share of famous alumni, Bram Stoker, Oscar Wilde, Jonathan Swift, Edmund Burke, Samuel Becket to name a few.

The Old Parliament now the Bank of Ireland.

Trinity is located across the street from what is today the Bank of Ireland formerly the Irish Parliament under British rule. We had a lovely tour of the place with a recent graduate student, who told us about housing on the campus which is somewhat primitive to this day, the buildings are old and historically protected so there is a measure of inconvenience like the showers entrance requiring one to walk outside the building to access them, in Winter it is a pretty unpleasant cold experience. The formal dining room of the University is open to professors and graduate students who distinguished themselves and received a prize. The grounds are beautifully kept and on the square there are very old Oregon Maple trees, they usually do not grow to be this big but given that they were planted in the old monastery cemetery and are surrounded by the buildings of the college, they have grown to a majestic state. 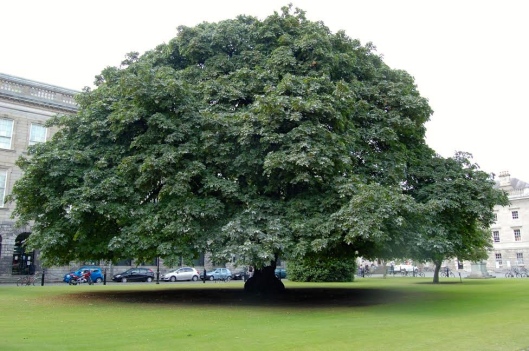 The clock tower on the square of Trinity College, Dublin.

Trinity college residence no 18 on the campus, the area is known as Botany Bay, where disruptive students were housed, this was the residence of Oscar Wilde.