Another Sunny Day, YAY!!!!! It got warm today around 40F with lots of sunshine, opened a window and enjoyed a nice car ride out of town without the heater in the car. Time to think of having the tires changed and getting my car’s annual inspection done. Every year the PEI Government requires you to get a new licence sticker at $100 fee and also a safety inspection at $45. the inspection can be done at your dealership. The only catch is that often they see you coming and will suggest new tires or brake job or some other kind of maintenance, hard to say no because if you do not have your inspection sticker it affects insurance etc. so they got you.

Covid 19 wise we are doing OK, the daily briefing by our Provincial Health Chief Dr Heather Morrison, the woman is seen as a Saint here, told us that we are holding at 22 people who had the virus, of that number 8 now have recovered, No deaths and No hospitalization. This is pretty damn good, if you look at Quebec with 900 + new cases in one day, total 9000 cases and Ontario at 4500 cases in the same boat, Alberta and British Columbia are also not doing well. In total Canada has about 16,000 cases and growing with close to 400 dead. Quebec now has police road blocks everywhere to stop people travelling, I am amazed they had to institute this measure just to get people to STAY HOME. What I do understand now is that Canada is populated by spoiled children who are very selfish and entitled, a kindergarden in other words.

So Easter is coming on 12 April, we needed vodka, gin, wine and prosecco. So we drove to Montague a 30 minute drive. In Island speak that is very, very, far away, who would go that far and not spend the weekend, Yes Islanders are a funny bunch. Anyone living in any large city would never think that given traffic etc. but on the Island traffic is 2 cars on the road, lots of traffic is 5 cars, beyond that well it’s the end of the world.

We knew the protocol to go to the Liquor store in Montague, friends living in the area told us its very quiet. Montague as a population of  1900 people on the ocean, lovely place. We were met at the door of the store by the security guard who asked us a few health related questions, things like you are not sick and no fever or cough etc, like everyone else, he fully expected us to be honest in our answers and truthful, its a personal honour thing.  We had to give our order of liquor to the clerk inside at the table, you cannot wander the store because of the Pandemic. So we checked out the website in advance,  got the name of what we wanted and told the clerk and she then went to get the bottles and brought them to the cashier who was behind this big plexiglass thing. The good news is the Government raised the limit from $100 to $250 dollars. The original reason for the limit of $100 was that all is required then is to TAP your credit card on the machine and not touch it. But now since everyone is wearing gloves, we had our gloves on, they will accept debit and credit cards and cash. So we went wild with our purchases. We got all the liquor we needed to celebrate Easter in style at home by ourselves.

The funny thing was that the Cashier asked Will if he was from Charlottetown, he looks like a townie? WHY? Well we were wearing corduroy pants instead of jeans, I had a baseball cap but it was from Trinity College Dublin instead of the Toronto Blue Jays and Will had a Irish tweed hat. I was clean shaven! OMG! All that is a dead give away, you are not country obviously, you come from the Capital with all the bright lights some 30 minute driving time away.  We told friends back in Charlottetown who are old time Islanders and they laughed. We were obviously too well dressed.

We also went to see our friend who lives in Lower Montague, which is 2 minutes beyond the village limits and on the Ocean, the view is open water and in the far distance its the Cap Breton in Nova Scotia. Montague is a lovely place and like Georgetown which sits on the other side of the very wide arm of the Montague river its very PEI. 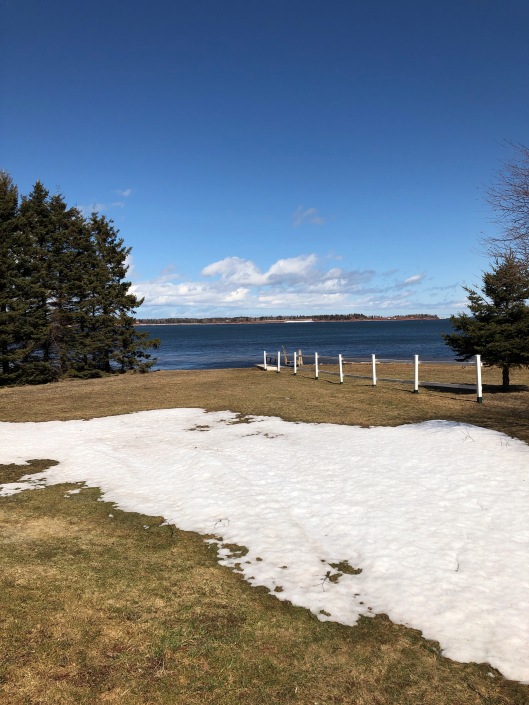 From our Friend’s front yard the view of Georgetown across from her and then a longer view of Panmure Island and the Strait of Northumberland.

We live extraordinary events and the full consequences are not yet known, but we must hope for the best. So though we are not under lockdown yet in PEI, I have a strong feeling that it is coming. Today both the two largest provinces of Canada, Ontario and Quebec have closed down all businesses by decree with the exception of grocery stores, liquor stores and hospitals. That is a lot of people out of work all of a sudden with kids at home for what now looks like months to come.

Today I went to the supermarket to do a bit of shopping, items we needed. The store was quiet about 15 people in all in a large super store. All the shelves were stocked no shortages except for Schweppes Tonic Water, very strange indeed why no tonic water? But you have to remember that Gin Tonic is the drink of choice on the Island and with people at home drinking is the pastime. The only other counters that are now closed is the fresh cakes and pastries, though I never liked them too much sugar and the deli fresh meat section is closed all for sanitary reasons. But you can buy all the pre-package brands anyway. There is a lot of frozen cakes too and ice cream not to mention all those Easter Chocolates.

So we took a drive to Brackley Beach just 15 minutes away from our home in the National Park on the North Side of the Island. The park is beautiful with its Maritime Pine Forest, giant sand dunes and beach stretching for miles. It was pretty quiet and people do practice social distancing. The beach is covered with ice and snow and wet red sand typical of PEI.

The air was fresh but no wind and the sea was calm, no waves. It is so tranquil, the world and its troubles very far away. The sea always fascinated me, it is enormous, vast and stretches to the horizon, you can imagine that Europe is out there beyond the curve of the Earth.

We also went to the Agency Liquor Store on St-Peter’s Road just outside the city, South of the Airport. It is a strange shop, part gas station, part convenience store and part hard liquor store. There are 4 such stores in PEI who are privately owned by the IRVING family who own just about everything in Maritime Canada. All our Government Liquor Stores are currently closed so these private stores make a killing selling booze. 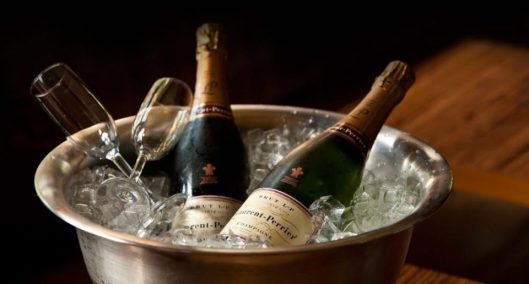 Our Wine cellar at home was out of Champagne or Prosecco and I absolutely needed a bottle for tomorrow. I got two and a bottle of red Italian wine. Though I could have driven to New Brunswick on the mainland of Canada for booze, this is currently not a good idea since I would have been obliged upon returning to the Island to spend 14 days in self-Isolation, meaning you cannot leave the house at all. The Premier and the Government of PEI today imposed fines for people who do not respect the rules on Self-Isolation which includes police visiting your house etc. The first fine is $1000 and the second fine is $10,000. So no we are staying put on PEI and not going anywhere. As the Prime Minister said today, now is time to stay home, enough is enough with not respecting the rules. In Nova Scotia next door it is even more strict, you can only walk your dog or yourself around your city block where you live or else. We must also stay 6 feet away from anyone else everywhere, including the grocery store.

So (spoiler Alert) I will not be having a big Birthday party tomorrow with a special cake as is the tradition, fireworks, balloons, large floral tributes, Mariachi band and chorus. It will be a very quiet affair, we will have our Prosecco, a nice dinner, and a special dessert. We won’t starve. 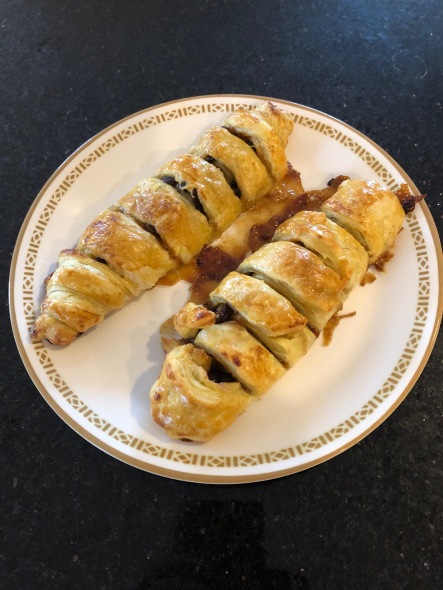