Here are different photos of things that I miss, from a previous time in my life. Life is like a book, you turn the pages and move on. You can re-read a book but it is never the same as the first time because you know the story plot. One should not attempt at re-recreating life as it was, because you will always be disappointed.

At any rate life today has given me other opportunities including many at the National Gallery http://www.gallery.ca  or now on the Advisory Committee for Arts and Culture of the City of Ottawa, plus numerous other projects I enjoy.

The local wine and cheese shop found in all neighbourhoods (click on image), you also find pasta and bread, fine chocolates, olives, nuts, fresh truffles in Season, Prosciutto and other cold meats. It’s your local tuck shop, there is enough selection to prepare a simple but elegant meal with a good glass of wine.  Each shop is slightly different from the other, the wine selection varies greatly because each shop owner buys from a winery they like or are affiliated with. Some shops also produce their own dry biscuits to go with your glass of wine. The olives are from a grove own by the family for generations, sometimes more than 20 generations, The prosciutto they sell also comes from a butcher or a farm which is producing small and follows strict production lines to ensure quality. It is a pleasure just to walk in and look around. If you shop regularly at the same place, the owner will take a liking to you and you get very good service. At Christmas and Easter these shops become treasure troves of specialty foods. Given that food is such an important cultural part of life in Italy, you can often find a nice gift  for friends or a host.

An old photo of Piazza St-Peter’s seen from the top of the dome of the Basilica, c.1929. By 1939 just 10 years later this view will have been completely altered due to a project initiated by Benito Mussolini to mark the signing of the Lateran Treaty with the Holy See (Vatican). This Treaty Officially recognized the Vatican hill and all of its buildings within the great walls of the Vatican to be a State, a country, with real borders, small one mind you, but nonetheless a Sovereign State with Official Diplomatic Relations with the Italian Republic.  Today some 130 countries have Ambassadors and Embassies accredited to the Holy See.

All the buildings in the centre span will be demolished between 1936 and 1939. The new street known today as Via della Conciliazione (conciliation). This majestic avenue is 420 meters long and 40 meters wide, leading from the Tiber River to Piazza St-Peter. It was finally inaugurated in 1950 for the Holy Year in the presence of Pope Pius XII and the Italian President Luigi Einaudi.

The top of the street by the Tiber River, the dome of St-Peter can be seen in the background. Many of the buildings on the new street will also get a new facade and several will be altered. For anyone visiting Rome today it is difficult to imagine or know that prior to Via della Conciliazione being built there was a whole neighbourhood on that spot.

As it appears today. The border between the Italian Republic and the Vatican State is at the large opening of the colonnade. The whole neighbourhood on the left of the photo is called the Borgo and has many good restaurants and hotels. We use to go to one restaurant in particular, Il Mozzicone dei Fratelli POGGI, Borgo Pio 180 for the best Spaghetti Carbonara in Rome. Owned by the Poggi family like many of those small eateries, the decor is very simple, framed pictures of the soccer team of the Papal Swiss Guards over 40 years, checkered table cloths, wood chairs and a nice terrace on stone pavement. The clientele are numerous Bishops and Archbishops, Cardinals and other bureaucrats of the Vatican State who come for lunch. The Saint Anne Gate, the official business entrance to the Holy See, is just up the street. They are always closed on Sunday as is the Borgo. So on that day stay on the Rome City side of the Tiber River. We went to have some Carbonara at Fratelli Poggi on December 26, 2008 our old Reesie had just died at 17 yrs of age and we simply did not feel like doing anything. The neighbourhood was quiet and it was a cold humid day. We will always remember that restaurant for its association with our time in Rome but also for Reesie, he was such a good boy.

Reesie, Born in Chicago and died in Rome.

The Trevi Fountain before it was modified to what we know today as a tourist magnet (trap) Originally it was simply a fountain giving good drinking water. The water came as it does today via an Aqueduct Acqua Virgo, built 19 BC in Antiquity.  Trevi is the name of the neighbourhood meaning three roads, Tre Vie, in 1629 Pope Urban VIII asked Bernini to design a new fountain and palace to supply water to the area but also as an urban beautification project. The Pope died and the work stopped, it will be completed in 1762 under Pope Benedict XIV many otehr artists will work on the design, Nicola Salvi and Pietro Bracci with Giuseppe Panini will give it it’s final look. I would never visit this area because of the huge number of tourists just sitting around. This is something I really do not miss at all. It you wish to see it in silence and admire it go before 8am or after 11pm when the area is deserted. 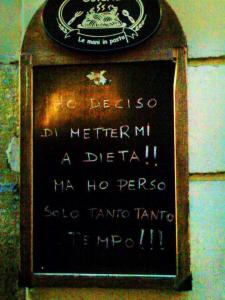 A funny sign at the door of a restaurant in Rome. It says ”I decided to go on a diet! But I have only so much time!!”

Ironic saying so typical of Roman way of thinking. That I miss in everyday life.