The other night we went out for dinner instead of staying at home as originally planned. The day had been very busy and though we had planned a simple dinner, we were not up to making dinner. So we went to the end of our street which is a former wharf/pier where there is a great restaurant, seafood and lobster of course. The dining room and terrace is build right over the Hillsborough river.

The Lobster on the Wharf was a first for us despite the fact that we live just 300 feet away. We got a table on the terrace with a wonderful view of the river, we have had some very warm weather and it was about 23C that evening.

The view from our table. Across the river is the town of Stratford.

Behind us in the park the setting sun over Charlottetown.

Also this month the 16 bells of St-Dunstan Basilica pictured above, are being re-installed. They were taken down in 1978 due to structural issues in the one tower of the basilica. A couple of years ago, some citizens of our town got together to fund raised and come up with an engineering plan to built a steel structure inside the North Steeple and re-install the bells so they could once again ring. This year they will once more on Canada Day 1 July to mark the 150th Anniversary of Canada. 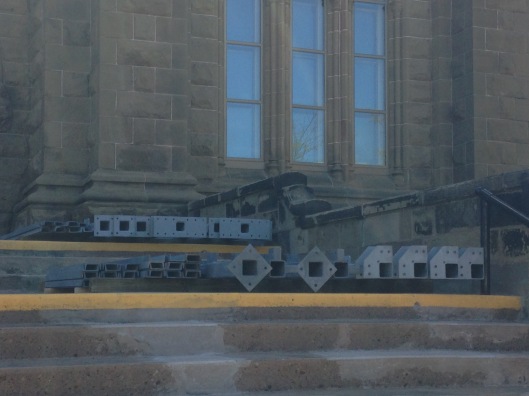 steel structure to be installed sitting on the steps of the Basilica. 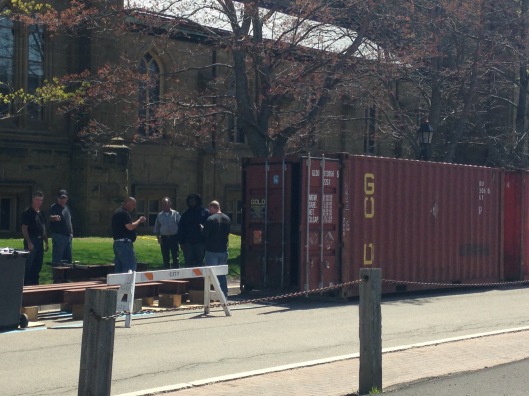 The containers with the bells inside waiting to be hoisted up.

Across the street is the Great George Hotel, a wonderful little hotel which is composed of a whole block of heritage buildings all built around 1835 and turned into a privately owned hotel. Really a nice place and of course being May the tulips are out.

Talking of Spring, many people are now planning their gardens and Van Kampen is offering the first baskets of flowers. The prices are a little too high for my taste, I am going to wait until mid-June to get what I want, there will also be more choice then. 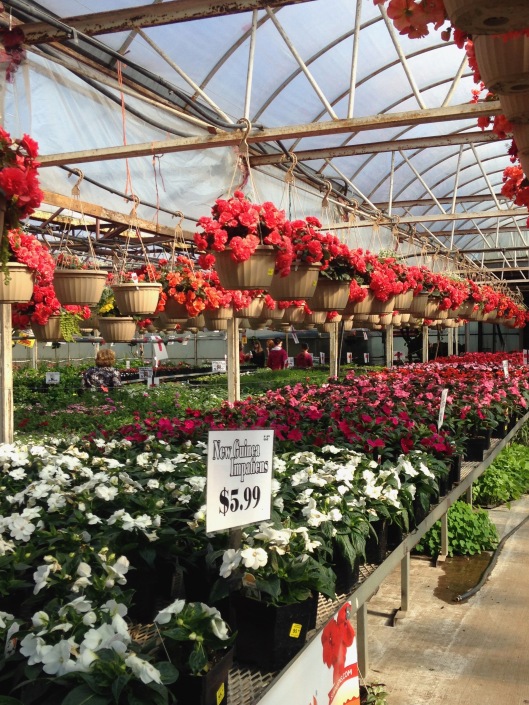 A small offering of what they have now on sale.

Also with Spring, it is time to clean my Oriental carpets, all of whom I bought in Damascus years ago. It is or was the greatest carpet market in the region. Iran is another great place for carpets but with sanctions it is difficult to bring them out of the country. Damascus was a great market because the great caravans and then the railway brought people to Damascus and the Hejaz railroad would bring the faithful to Mecca. Most people would finance their trip by selling family carpets in Damascus. Great choice and prices. I am so glad I had the opportunity to live 8 years in the Middle-East and enjoy the food, people and culture and the great ancient markets.

They need to be aired and beaten and take some Sun it’s good for the fibers. All are hand made, 100% wool and natural dies, real gems.

Have you ever noticed that if you hear Jazz on the radio the announcer always has a smoky voice. It seems that you cannot have Jazz music without that voice, it goes together and this is true of every station I have ever heard, from Radio Jordan to Catalunya Musica from Barcelona or BBC3 or Radio-Canada, etc.

I just finished reading an excellent book My house in Damascus by Diana Darke. 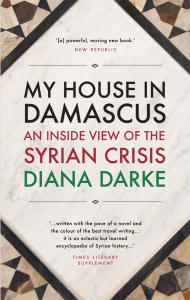 Diana Darke is a fluent Arabic speaker and has specialised in the Middle East for over 30 years. The owner of an old courtyard house within the walls of Old Damascus, she is well known as an authority on Syria and has written for the Sunday Times, the
Guardian, the Financial Times and the BBC. Diana Darke is the author of several guides to Syria and Eastern Turkey.

At the moment Syria is in the news everyday and Canada is taking some 25,000 refugees selected by the UNHCR, people who reside in those immense camps in Jordan. Very low risk for Canada and mostly poor people with large families who could not flee elsewhere.

Diana Darke tells the story of the house she bought in the old walled city of Damascus surrounded today by the modern city. It is an area I know well, since I went to it many times to buy my carpets from the brothers Khaled and Anas Lahham in the Souk Al-Arwam in the days under the dictator Hafez and then his son Bashar Al-Assad.

1920 photo of Souk Al-Arwam in Old Damascus. The carpet shop is or was on the left of this photo a man is standing at the entrance.

Her house was from the Ottoman Period several hundred years old and she tells the tale of her Syrian friends and how she came about to buying and renovating the house, its history, her friends and how the Civil War starting in 2011 overtook them and she had to return to Britain.

It’s a very good book and very accurate in its description of the people and their terrible situation, something very few readers will be able to grasp the full horror of a people condemn to be bystanders in their own tragedy while the political actors great and small play. I highly recommend it to anyone who wants to read about the ordinary human face of this civil war. I travelled and stayed in Syria many times during my 8 years in the region and while living in Jordan, I wish I could say I enjoyed my time in Syria but no, having to deal with the monumental stupidity, greed and sheer idiocy of the Baath Party and the government officials in Syria was enough to put anyone off the country.

As Diana Darke points out astutely the civil war in Syria could go on for many more years since Assad is unlikely to let go as long as Iran and Russia support him fully. Unless Iran is promised or given something they want from the USA and then they could switch camps and abandon Assad, but the prize will have to be fairly important for Tehran for this to happen. Then what will Russia do? As another observer pointed out, in Arab countries whenever there is a revolution it is always about political institutions there is never talk about enhancing or creating a new social framework and institutions.

Finally reading the Italian newspapers this news item, Line C of the Metro of Rome which has been under construction for 9 years and is 5 years late and 1 Billion Euros over budget has been shut down for gross mismanagement, 500 workers have been laid off, the City of Rome is 225 million Euros short and can no longer pay. The line will now end at the St-John Lateran Station only one third of it built. The two critical stations going by the Colosseum and down the avenue through the Roman Forums, the most archeologically sensitive area of the Eternal City will not be completed for the time being and the rest of the Line which was to go all the way to the Vatican and down to the Olympic Stadium may never be completed now since work has not started on that portion. The portion of Line C which opened last year only carries a third of the passengers it is meant to carry, the planning predictions were way off.

Another story which made headlines in this time of austerity in Italy with Museums forced to close or stay open only a few days a week, all have budget problems. How can this be with more and more tourists coming to Rome and flocking to the numerous museums?  All the money that is collected from ticket purchases, usually 12 Euros per ticket, only 30% actually goes to the Museums the rest or 70% of the profits go directly into the pocket of the company running the ticket app. online. Who allowed this to happen?  Another Roman story or farce.

None of this surprises me, this is the way things work or don’t in Italy. Some are saying, I am not kidding, where is Benito Mussolini to help us out of this mess, but I somehow doubt it. Even Il Duce would say that Italy was impossible to govern.