Palenque is a Mayan archeological site I visited in 1986 in the Chiapas region of Mexico. The most famous ruler of Palenque was Pacal the Great, whose tomb has been found and excavated in the 1950’s in the Temple of the Inscriptions, a magnificent site. The Palenque ruins date from ca. 226 BC to ca. AD 799. King Pacal was 80 years old when he died. His reign, and that of his son Chan-Bahlum, are credited for inspiring the exceptional beauty of Palenque’s art and architecture. The sarcophagus lid weighs as much as five tons and the sarcophagus itself weighs in excess of fifteen tons. The inscriptions are beautiful and complex and the Temple of the Inscriptions had a magical feel to it. 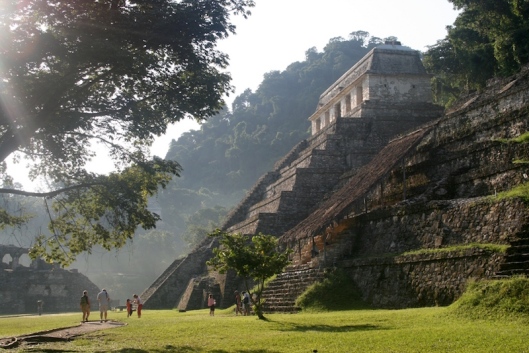 We drove from Mexico City, in those days you could only travel by daylight because the roads were poorly marked and had no services outside of towns. Driving outside Mexico City today is not recommended at all for security reasons. Back then the security situation was different and more peaceful, however driving at night was not recommended, in rural areas at night cattle and horses or other animals would wander unto the road and create a hazard. The drive was pleasant and we saw many nice places, had good food and much fun. Speaking Spanish opened many doors and made everything much easier. Back then tourist groups were still small and not frequent like today so visiting Palenque was pleasant and quiet. The one group we did encounter in Palenque were French, noisy and argumentative about 15 people. It seems every person in this group had a different guide book with a different version of the description of the site, it was hilarious. They were not aware we understood everything they said, it seems they were in their own little bubble. We would listen to the silliness of their talk and Will, our friends and I would mimic the tourist accents and gestures and have great fun.

However as dinner time came, we were having drinks on the terrace of the small hotel our French tourists all looked pretty agitated, one lady was in tears and one fellow looked pretty dejected while others were telling various tales of what had happened but it was complicated and did not make much sense. It turns out that the lady crying had found out by accident that her husband, the dejected looking fellow had sex in the jungle around Palenque with one of the other females in the group. Our little French group had split into various camps, one for the wronged wife, one for the husband and one for the mistress who was judged to be better looking than the wife and probably better sex. There was a lot of drama and recriminations from all parts. The Don Juan in this affair was a plain guy not worth a second look. But that was not all, a little later the tour guide arrived, he was very angry at the group. The group had accused him of dereliction of duty, in the afternoon we had continued our exploration of the ruins of Palenque, the French group had gone for a swim in a nearby waterfall and river area renowned for its natural beauty. The tour guide had told the group not to dive into the water as it was not deep and dangerous to do so, one young man had not listened and throwing caution to the wind dove in head first and from what we could understand, had died or was seriously injured or both. Some in the group wanted to call the French Consul in Mexico City to report this awful tour guide and others wanted to have him arrested on the spot. Again much drama since Palenque is in an isolated and remote area none of what was proposed by hotheads could take place. Suddenly the dead man appeared, so he was not dead after all, yes he had a big bruise on his forehead and was very pale but otherwise alive.

All this drama convinced me to never become a tour guide.

From Palenque I brought back a terra cotta head representing the ruling Prince of Palenque whose famous tomb we visited. This sculpture has travelled with me to all my posts around the world and has been in all the gardens of our various homes. 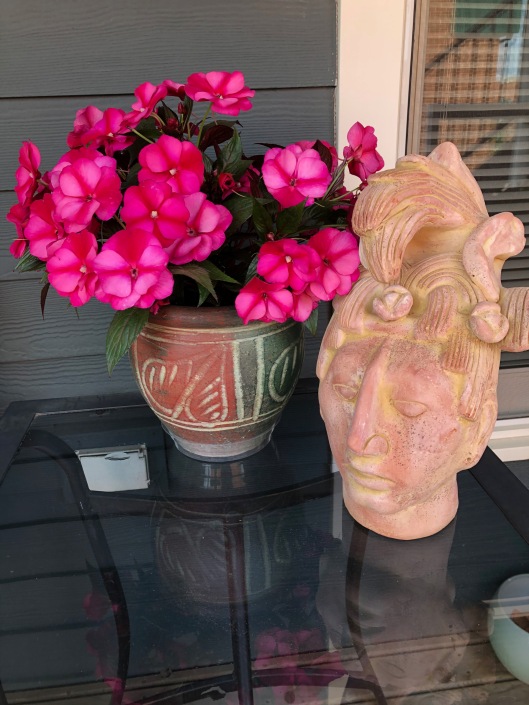 Pacal the Prince of Palenque, with his elaborate greased hairdo dotted with flowers and noble Mayan features. He ruled for almost 70 years.

The tomb of Pacal, his Official sculpted portrait with regalia is visible in the back and the lid lifted permanently showing his momie resting inside the sarcophagus. An interesting fact about his remains, though he was 80 yrs old when he died, his teeth have little wear on them, being a Prince he ate mostly soft boiled food which was common for Royals, thus preserving his teeth in good condition. 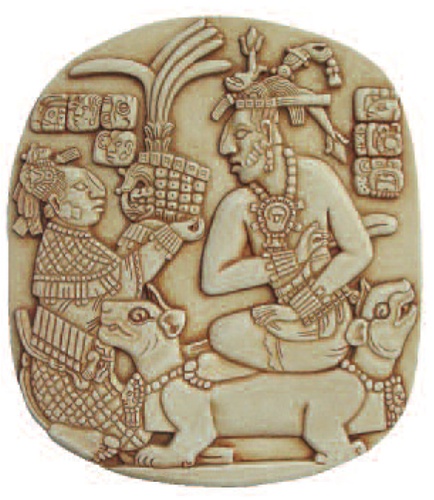 Pacal sitting on his Jaguar throne, his Mother presenting him with the Crown on the day he became King. The Mayans had specific features like a prominent nose and a receding forehead, crossed eyes, these features were created from early childhood and considered  desirable attributes enhancing the physical beauty of the person.