The picture of the waterfront of Charlottetown in mid-1960’s show how industrial the waterfront was with its port facilities, railway yard and vestiges of the 19th century ship building period. If compared to today’s waterfront park, the area is unrecognizable. In 1989 with the demise of the railway in the Province, all rail equipment was removed and instead parks and hiking trails were built, now covering extensive areas not only in the Capital but across the Province. 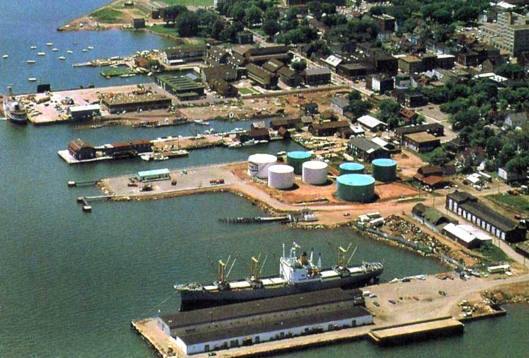 At the bottom of the photo is the old potato storage terminal, today it’s the Cruise ship terminal completely rebuilt and renovated. Behind it the rail yards  and a rail car repair shop now transformed into a great hall soon to become a Farmer’s Market. Next to it the old oil tank park of a giant oil company, the tank park disappeared and now the area is totally transformed into a lush green park known as Confederation Landing, a gift of the City of Quebec who shares with Charlottetown in 1864 the honour of hosting the conferences which led to the formation of Canada. Next to that more empty land now occupied by the Conference centre and the Delta Hotel, shops and restaurants. This coming Summer Charlottetown will welcome 94 cruise ships from various companies with over 100,000 passengers landing a few meters away from my house.

The waterfront today, you cannot recognize it.

Life in Charlottetown is never dull, small town like Mayberry but lots to do. This week we had invitations from every night of the week and people to meet in the day time.

First there was pumpkins to be bought at 0.99 cents to $5.00 for a giant one requiring two strong men to lift into the car trunk, a bargain. It comes from a Farm just minutes away from our home across the Hillsborough river. 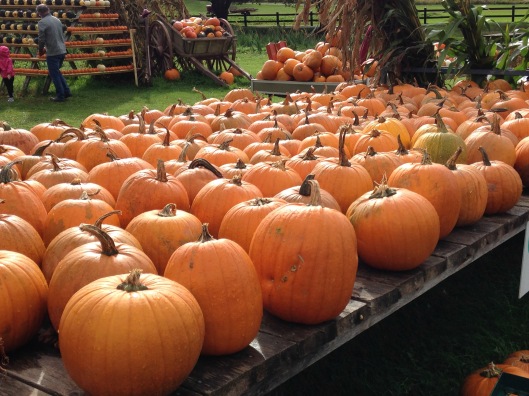 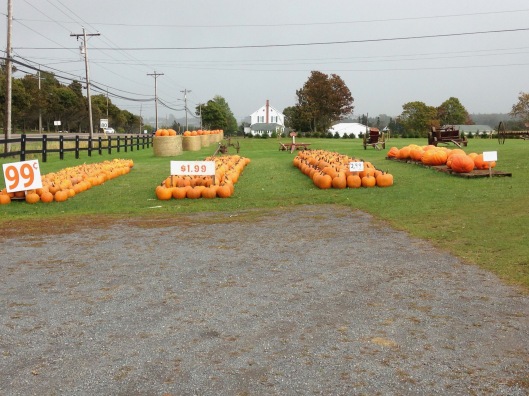 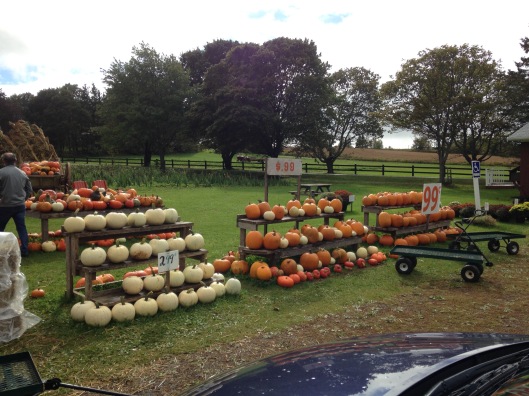 We also had Farm  Day on Queen Street which is the main street of Charlottetown running from the river’s edge up North to the far suburbs some 5 Km  away. The Farm Day was held in the old town core between Water street and Grafton Street.

Lots of farmers present most of whom can be found at the Farmers Market on the weekend. I bought some fresh flowers. 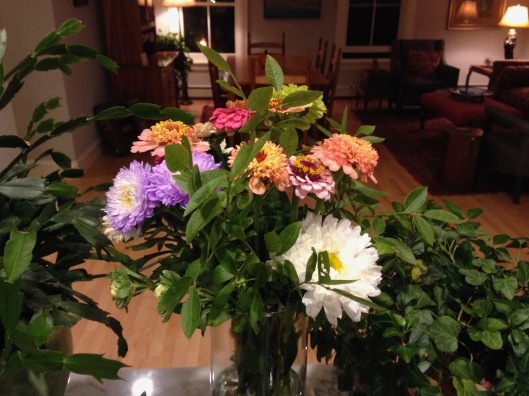 We were invited by the owners of Dunes at Brackley Beach to their annual Fall party which takes place at their home, a very modern construction which blends in perfectly with the surrounding area by the sea. Here is a photo looking out unto the gardens towards the sea. The garden is part of their Art Gallery and restaurant and features Asian sculptures most from Indonesia. A very beautiful and unique place. http://www.dunesgallery.com

While we were on the rooftop a full moon appeared, at first as it was rising it was orange and then turned yellow. 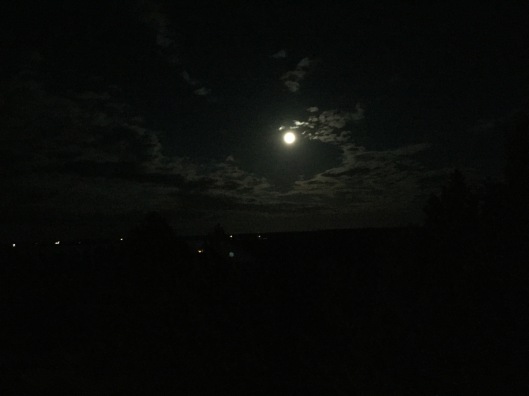 We also went to a housewarming party in Saint Catherines PEI our neighbour Kendra made the cake, it was so good, Kendra is an excellent pastry chef. The cake had real flakes of gold on it. 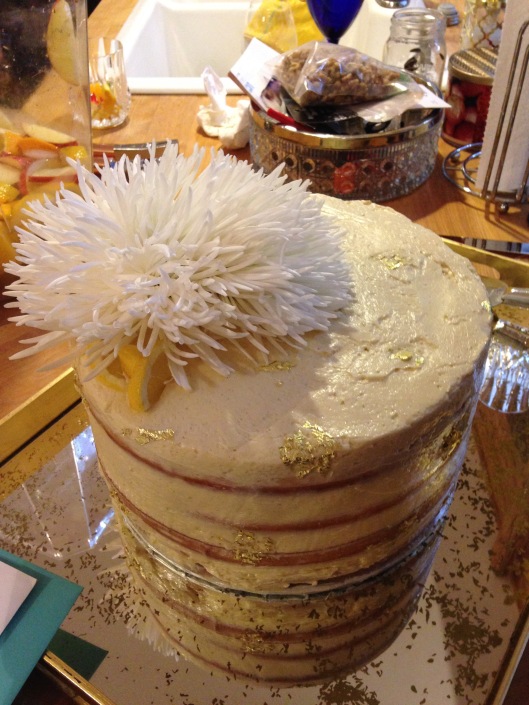 Leaving the house, because it is in the country side the only light was a half moon, I made a left turn instead of a right turn on the road to lead me back to the highway and suddenly I was on his red dirt road in a dense forest, I thought am I lost, I could not recognize anything. However as is often the case in PEI rural roads they lead you back to the main road, suddenly I was on the highway near Bonshaw.

We are still having cruise ships visiting Charlottetown until 28 October. Today we had 2 one docked at the pier and the other out on the river.

I am so glad we did not buy a Palazzo on the Gran Canal in Venice, living here is the same feeling, look at this one turning around in front of my window. They are closer than they look. 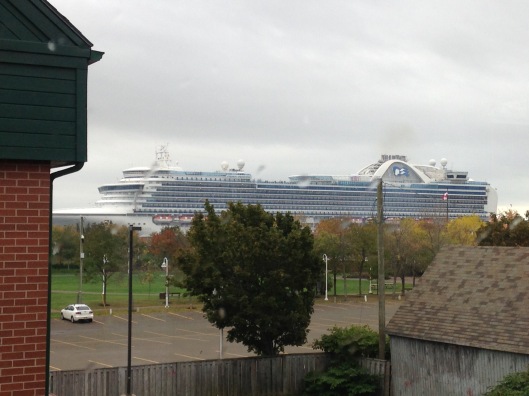 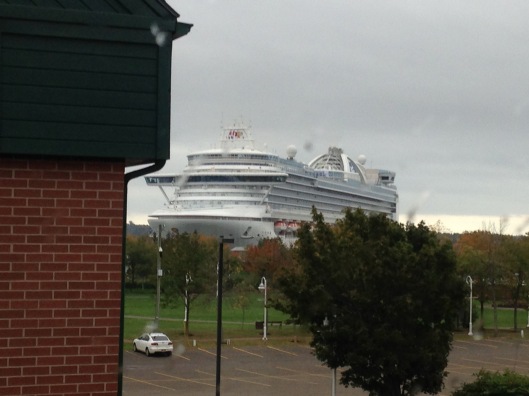 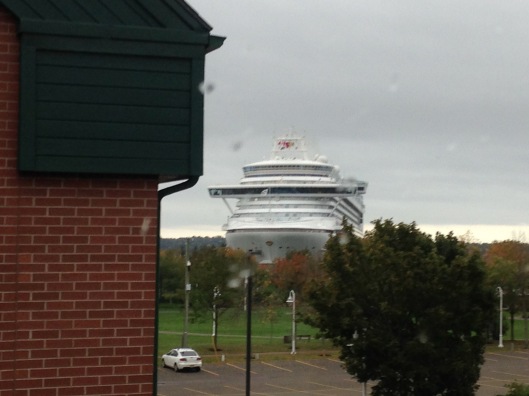 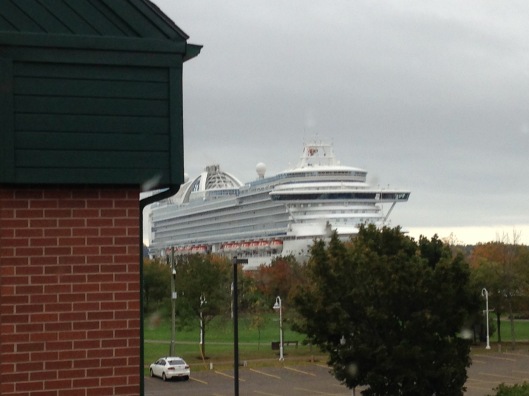 They turn around a lot faster than you might think. This is a Princess cruise ship. All cruise companies visit us.

Finally today was Thanksgiving Sunday so here is our table, do notice the open window, it was quite warm around 22C which for the 8 October is not seasonal at all. But I am not complaining. 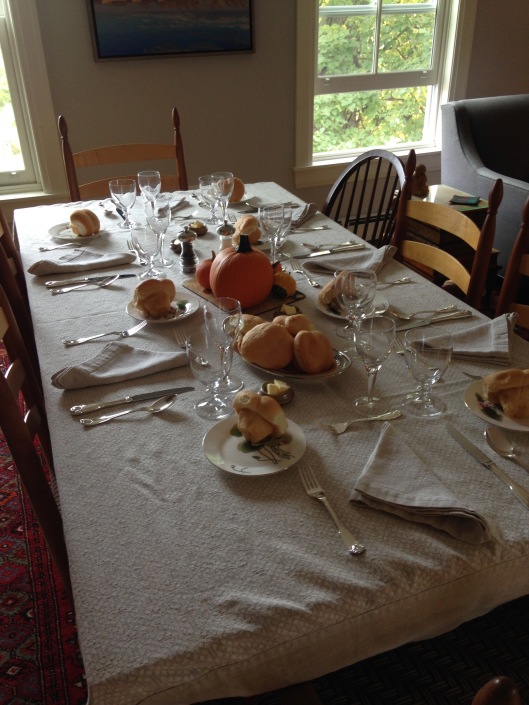 The turkey was perfect and so good, Just enough left over for a casserole or a few sandwiches. We also had 2 pies, one Buttermilk pie and the other a Gala apple and PEI Cranberry mix. 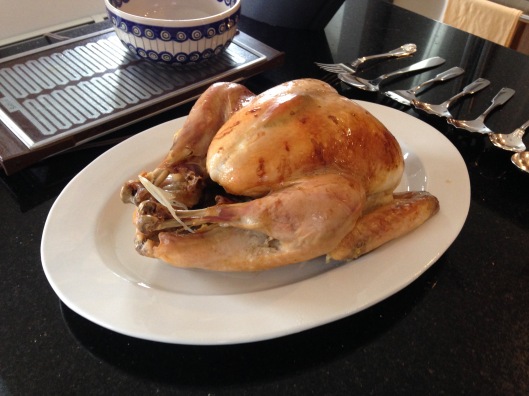 We have had a glorious sunny week in Charlottetown, late Summer weather with cool nights.

There are 2 cruise ships in port every day and next week we will have 3 in one day. Though the ships can carry upwards of 2000 passengers, they usually have only about 1000 on board at the most.

It is so pleasant to walk around town and go the to dock to look at the river and all the green and some colour now on the trees all around, really idyllic. Here are some pictures. 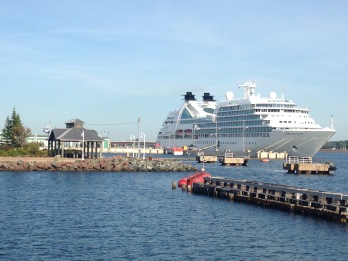 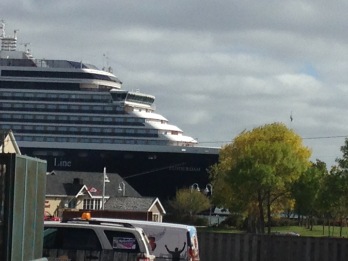 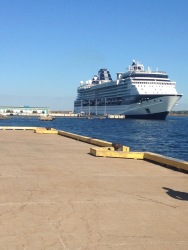 With this Thanksgiving weekend a lot of activities at the Marinas, the owners are taking their boats out of the water for winter. There was one this afternoon being taken out a great big thing, valued at $750.000 cdn. I can just imagine the cost of gas for that boat. It is so big that as it goes down Water Street to its parking place for the Winter it needs an escort truck to make sure incoming traffic is not in the way. The other pictures are of the various Cruise ships. This is my backyard literally, the once close up with the Holland American ship is taken from my kitchen window.

It is so relaxing to just sit on the docks, enjoy the quiet and the sun and eat an ice cream looking at the scenery.

As we prepare for our impending move to PEI, we now have a new 3 bedroom apartment and will now have for the first time in five years an actual bona fide guest room with guest bathroom, we ordered furniture for that guest room and bought over the phone, long distance, a mattress yesterday. I knew what I wanted to buy but I wanted to see it before with my eyes, so I went into one of those mattress shops and looked around, I cannot imagine what a terrible job selling mattresses must be, if all work is noble, selling sleep ware cannot be that exciting. I did see the mattress I wanted in the price range I was willing to pay for, took down the details and then went home and phone the mattress and appliance shop on Mount Edward Road in Charlottetown.  The daughter of the owner took my order and date for delivery, so all is arranged. 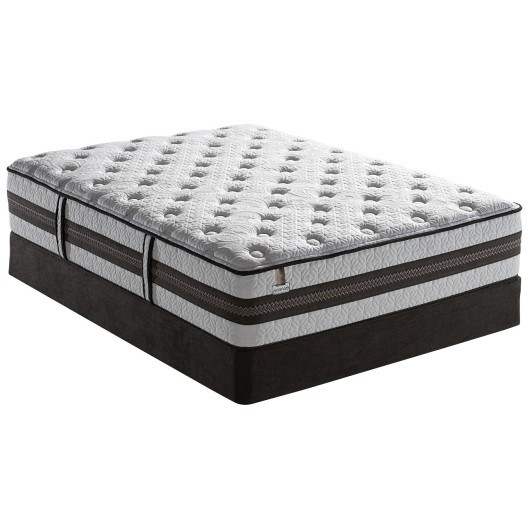 What I cannot understand is the unit pricing on mattresses, it makes no sense, prices are all over the map, sale prices are even more strange. How can you offer a top of the line mattress at $4000 dollars and put it on sale at $1500 and still make a handsome profit.

Any mattress at $1000 can be sold on sale at $499. really? How? Well it is all a crap shoot as far as I am concerned. I also saw a line of mattresses which sells for $300 called memory foam and comes in a small box. This is a Queen size mattress stuffed in a small box, how can this be. The salesman showed me that once the mattress is out of the box, you lay it down for one day and it will, like by magic, reach its actual size, like some kind of giant soufflé just rising to the occasion.  It is good for 5 years apparently, I was not convinced.

The tire story is even more bizarre, I will not go into the pricing for tires because that is also a huge fraud on consumers. Prices fluctuate wildly depending on the Season and when and where you are buying. 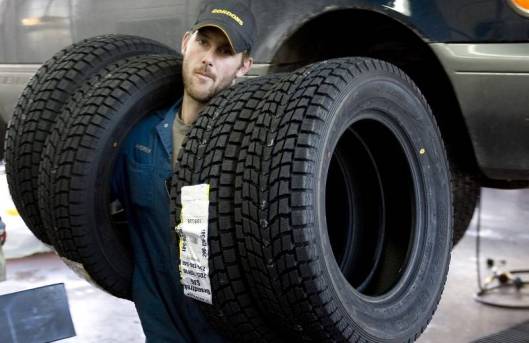 Since I have no room at home to store my tires (winter or summer with rim) for a fee I leave them with the dealership to store for me until it is time to change them. Now two years in a row the dealership lost my tires and rim. No explanation given, they are lost, we do not know what happened to them. How can this be? They are stored with you and I paid you for the service. The first time the tires were found within one day and all was well. This time after 7 days of being lost I was told to come very early, in fact before opening time. I showed up at the appointed hour has the Sun was rising over the horizon, the manager was just unlocking the door. I am told to just have a seat in the waiting room and all will be well, why all the drama. One hour later, big smiles all around, all is ready, handshakes and I go out the door. The car was parked right at the door, now that is strange, usually the car would be in the lot, in row 4590 about 3 Km from the garage, go find it, amongst a sea of parked car. Not this time, it was at the door, how nice I thought. The only problem was… these were not my tires or at least not those I purchased with the car 5 years ago. The tires are brand new, they still had the white sticker usually found on tires when you purchase them. They also came with new rims, my winter tires stuffed in the trunk of my car.

At that point I thought better not ask any questions, it would be pointless, the dealer silently admitted that he had truly lost them and preferred to avoid a scene like the ones in the movie Godfather part 1 in a waiting room full of customers. I simply drove away thinking good for me. I am not returning to this dealership anyway since we are moving. 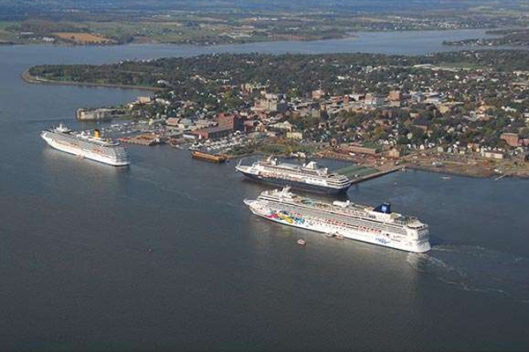 The port of Charlottetown, PEI

It was announced this morning that the first Cruise ship will arrive in Charlottetown on Monday. In total 60 cruise ships are expected this Season (May to October). They usually stop for 2 days and excursions take the happy wanderers all around the Island. This means some 180,000 people will come up Prince Street by our house on horse drawn carriages, it’s scenic they say. Should I open a lemonade stand on my front steps and charge $5 US dollars per thimble full?

In 2017 for Canada’s 150 Anniversary of Confederation we will have the parade of tall ships on the Hillsborough river. That should be quite the spectacle and we will have a perfect view. 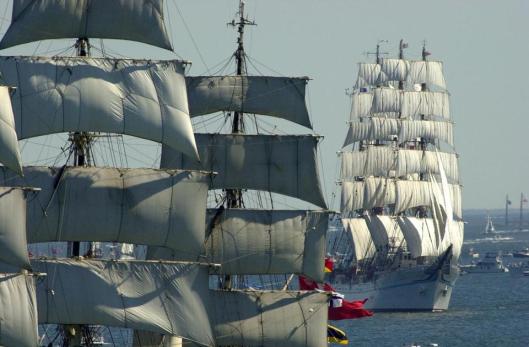