We originally booked this trip to Ireland some 16 months before the actual trip. It was before we even thought of moving to PEI. We do like to plan ahead and we have always done this in the past. The Company Belmond Grand Hibernian built this train from old Irish Railroad stock and completely refurbished them. The train can carry 40 guests, has a bar car and 2 dining cars. The compartments are well appointed and spacious like an hotel room with a full bathroom. It is in similar to the Royal Scotsman train and the Orient Express. Though Ireland is a small country and can be criss-cross in a matter of a few hours, this trip was developed by Belmond Grand Hibernian to included many cities and excursions by day, at night the train goes into a siding and stops until morning. This way you can sleep comfortably and not be disturbed by the train movement. belmond.com

We gathered at the Westbury in Dublin prior to being escorted to the Heuston Train Station in Dublin. While we waited we had a glass of champagne and a sandwich. The Westbury on Grafton Street is a very nice hotel in Dublin. Once at the hotel we did not have to worry about our luggage as it was taken directly to the train by the staff. When we arrived at Heuston Station we were greeted by an Irish Piper who conducted us to the platform where our train was parked. A beautiful blue and gold trimmed train, it certainly stood out in the train station not to mention our Piper playing Irish tunes.

The train is quite long 10 cars total and many railroad station in the Republic do not have platforms long enough to accommodate such a big train. The average Irish Rail Train is 6 cars. The train carries only 40 passengers on 10 cars so it gives you an idea of the spaciousness of the train and the level of comfort.

One of the two dining cars, the food on board was exceptional in quality, the Chef prepared great meals every day for us and presented regional specialty in each area we travelled through.

Our compartment was quite nice and comfortable.

Our fellow passengers where nice people and we got to know them during our trip across Ireland. This is important on such a trip given that we live and travel on the same train. Taking part each day in excursions and sharing meals. It just added to our enjoyment to have such an agreeable group. 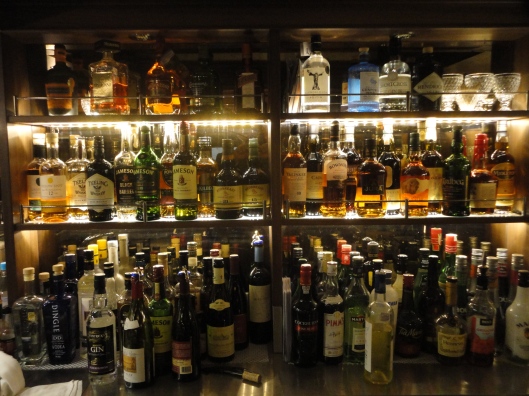 The bar car was well stocked with fine liqueurs and a vast array of single malt scotch and Irish whisky.

Our first stop was Cork Train Station, signage in both Irish Gaelic and English. We got off the train and were taken to Blarney Castle. The first time and only time I had visited the ruined castle was 1969. It was different from my distant memory of it, certainly more beautiful.