During the night we could hear the roar of the wind outside, a very big storm is over the Atlantic, passing well South of Halifax in Nova Scotia, we avoided the snow however this storm brings with it very powerful winds. So early this morning the calls went out, all schools remain closed and the University and Holland College also closed. Funerals are postponed for a day, businesses closed early or never opened. Looking out my window I could see visibility was very poor and snow drifts made things worse. The Police advised people to stay home and not take the car anywhere unless it was an emergency. The wind chill factor brings the temperature to about -28 C or -19 F. danger of frosbites. For my dear readers who complain of 57 F as very cold try -19 F for a laugh.

Prince street looking across the street from our house, the Water Prince Lobster restaurant is quiet for the Winter, re-opening on 15 April for Spring Lobster Season. Love the place this is where we had Will’s Birthday party in December with fresh oysters and lobster.

Will made from scratch chicken soup and biscuits, who said I wanted to give him away. But things are much worse in Newfoundland across the Gulf of St-Lawrence from us. In St-John’s the capital, the Mayor has declared a state of emergency and shut the city down.  only emergency vehicles, police and fire can circulate. Everyone else is ordered inside at home, the City is getting 70cm of snow in a few hours or 2 feet of snow with winds approaching 150Km per hour which is well into hurricane strength. This is the second such storm this Winter in Newfoundland which is unusual for them and more is coming apparently.

Here on PEI there is an advisory for the Confederation bridge over the Strait to the mainland, I would not want to drive over that sea bridge in high wind, it takes 10 minutes to drive over, scary is the word. Charlottetown airport is closed, flights cancelled or delayed. The streets are deserted.

We could have gone to the Club tonight which is only 4 blocks away down Water Street but the weather is poor and it is very cold and very windy. Overnight the winds will decrease from 70km to 60Km but still more snow drifts etc. Then tomorrow we are suppose to get some snow with the high winds and Sunday might bring more of the same.

So today Will wanted some whip cream and some yogurt for a recipe, I walked over to the convenience store to get him those items but did not linger. Strangely because of the high winds today we did get some patches of blue and some sun for a few minutes.

We have our Official Storm Chips for today so all is well. Covered Bridge a company from New Brunswick makes good chips. Good booze is also de rigueur on such days. A Maritime tradition.

So today we are listening to Emmanuel Chambrier, Pièces Pittoresques composed in 1881. Of the 10 pièces, Idylle and Danse Villageoise are probably the best known. On such a storm day what else can you do. Even our little ones Nicky and Nora don’t want to go out in such awful weather. They prefer to snooze listening to French music.

Despite being retired we do have a busy schedule of activities. We completed our week of attendance at the Theatre conference at the Confederation Centre, on show Canadian musical theatre by Canadian authors. We had visitors from out of Province and then Irma the hurricane.

My brother and sister-in-law both Americans, live in the Tampa Florida area where they have a house. They bought on higher ground and away from the beach front, they prepared for the coming storm and getting all necessary supplies. Stay or go what to do, at one point on Wednesday last it looked good and the storm was to be on the Atlantic side only. Suddenly all changed on Friday, they have her family near Atlanta, Georgia, could they risk driving up, was there time. On Saturday morning, my brother and his wife decided to make a go of it, they said goodbye to their neighbours, those who were left and did not want to go. They offered to drive them North but no they wanted to stay. The big truck was already loaded up, so they left their home and drove non-stop at snail pace North. It was pretty slow and in heavy traffic up to Gainsville, Fla. after that the road opened up and they arrived at their destination in Georgia, very tired but relieved to be away from immediate danger. They plan to return but who knows now when they can go home and what will be waiting for them.

We also have other friends in Florida vacationing in Venice or friends who have homes and condos for the Winter months, they are beachfront properties in this area also South of St-Petersburg. They fear for the worst and do not know when they will be able to go down to survey the situation after the storm.

Another friend has family in Chiapas, Mexico which was struck by a huge 8.9 scale earthquake. The quake was so strong that people in the Capital Mexico City felt the vibrations more than 1000 Km away, the good news the family is fine and safe.

In Canada we also have the enormous forest fires on the West Coast which have been raging for the last 6 weeks, something never seen before.

Hurricane Matthew came and went. On Thanksgiving Monday 10 October the sunny weather we had enjoyed for a week suddenly turned cloudy and stormy. We were told to stay home, the Confederation Sea Bridge which takes 12 minutes to cross over the Strait of Northumberland issued a warning that only private cars would be allowed across due to winds of 90 to 100 Km an hour. All other traffic would have to wait for the winds to die down, this happens often in Winter. The ferry service was halted because the sea was too rough.

Photo of the Sea bridge on Monday looking towards the mainland, courtesy of James MacSwain, photographer.

The wind was fierce in Charlottetown around 80 to 90 Km per hour and this for 12 hours as the remnants of Matthew passed over us. It was scary to hear the wind howling and the trees swing like twigs. It rained and rained violently but we were lucky since we were on the margins, it was far worse in Sydney on Cape Breton where peoples homes were flooded or heavily damaged by wind and water, roads washed out and people stranded as bridges collapsed. In Newfoundland it was worse, the amount of rain in one day was the equivalent of one month in precipitations.

We here in the Capital of PEI did not loose power and since it was Thanksgiving everyone stayed home, all was closed anyway for the Holiday. I only saw one big tree on Upper Prince street fall crushing flat the front porch of a house as if it was cardboard. The elderly couple in the house were scared, family and friends came to their help.

The next day the Sun was back and the wind had passed. We will get other wind storms this Winter it is a feature of Island life being on the Atlantic in the Gulf of St-Lawrence. 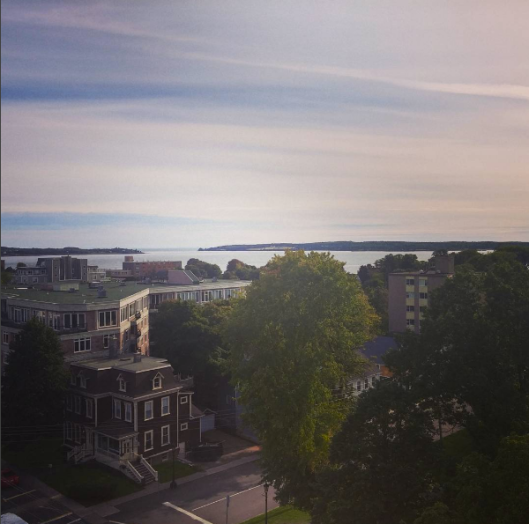 Charlottetown and the mouth of the Hillsborough river opening unto the Strait of Northumberland and in the far distance the mainland of Nova Scotia.

In the meantime we are now at the end of the Fall Lobster Season, many tourist restaurants featuring seafood are closing until May next year. The last cruise ship leaves on 19 October, the Marinas are emptying, boats being taken out of the water and stored ashore. Tourist shops are closing and the Fall and Winter program of the various cultural centres and museum has been announced. It is a time for us Islanders now, more quiet.