At the foot of Castle Hill and in one of the oldest part of Lisbon near the Alfama neighbourhood is the Sé de Lisboa or Cathedral of Lisbon. Tram #12 passes right by it and stops at the Church of Saint Anthony few a few steps away.

The Sé is dedicated to St-Mary Major, construction of the cathedral began in the year 1147, the building has been modified several times and survived many earthquakes. It is nowadays a mix of different architectural styles, Romanesque, Gothic and Baroque. It has been classified as a National Monument since 1910.

After the period of Visigothic domination the city was conquered by the Moors and stayed under Arab control from the 8th to the 12th century, although Christians were allowed to live in Lisbon and its surroundings. In the year 1147, the city was reconquered by an army composed of Portuguese soldiers led by King Afonso Henriques and North European crusaders and not to forget Martin Moniz taking part in the Second Crusade. An English crusader named Gilbert of Hastings was created bishop, and a new cathedral was built on the site of the main mosque of Lisbon.

Earthquakes have always been a problem for Lisbon and its cathedral. During the 14th and 16th centuries there were several of them, but the worst of all was the 1755 Lisbon earthquake, which destroyed the Gothic main chapel along with the royal pantheon. The cloisters and many chapels were also ruined by the quake and the fire that followed. The cathedral was partially rebuilt and, in the beginning of the 20th century, was given the appearance that it has today after important renovation. 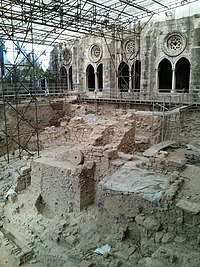 photo of the archeological excavations

In recent years the central courtyard of the cloister has been excavated and shows signs of the Roman, Arab and mediaeval periods. Excavations started in Cathedral Cloister in 1990. They have revealed a Roman road with shops on either site. A part of a Roman kitchen and a “cloaca” (sewage system). and traces of later Visigoth buildings. A very visible part of a Moorish building with red walls related to the former Mosque that once stood on this site was also excavated.

Now for the treasures of the Sé, on the second floor are the Offices of the Archbishop and beautiful objects can be found.

The meeting room of the Cardinal Patriarch and other clergy. The Cardinal Patriarch sat on a throne not unlike the Sedia Gestatoria of the Pope with ostrich feather flabella. This room is no longer used nowadays but illustrates the authority of the Church in Portugal prior to 1974. It is thought the privilege of the portable throne was granted by the Popes to the Cardinal Patriarchs of Lisbon due to the financial support provided them by King Joao V of Portugal.

This Monstrance in solid gold with diamonds and other precious stones was a stunning piece of jewellery. Monstrance are used A monstrance, also known as an ostensorium, is the vessel used in Roman Catholic churches for the exhibition of  the consecrated Eucharistic host during Eucharistic adoration or Benediction of the Blessed Sacrament.

This Cardinal’s mitre with semi-precious jewels. Cardinals in the presence of the Pope wear a mitre of white linen damask. The auriphrygiata is of plain gold cloth or white silk with gold, silver or coloured embroidered bands. The mitre originated as a ceremonial head-dress of ancient Jewish high priests.

This I thought quite funny, it is in the sacristy of the Cathedral, painted Portuguese tiles showing on the right God the Father with a triangle, in the middle the Holy Ghost and on the left God the Son, Jesus all three in conversation. Ok 3 persons in God but it looks like God is talking to himself. You wonder what is he talking about anyway, I mean he would not be talking about religion to himself. And if God is Eternal why is he shown as an old man? Should he not be ageless? I am going to get such a smack from the good nuns for asking such questions.