When we lived in Ottawa the only levee in the City was the one at Rideau Hall, the Residence of H.E. the Governor General where the public was invited to come pay their respects to Her Majesty’s representative.

Here in Charlottetown it is quite another affair, it starts at 8am and goes on all over the Island Province until 8 or 9 pm. It starts at Fanningbank the Residence of the Lieutenant Governor who is Her Majesty’s representative in PEI. Then the Premier who is the head of government has one, the mayor, the Colonel of the PEI Regiment, the Commander of the Canadian Navy, the Speaker of the Legislature, various other officials etc…  You get to shake hands, exchange pleasantries and get a drink and something to eat.  Usually people spend about 10 minutes and move on to the next one. Some people go or try to go to as many as possible in the day. Just in Charlottetown there must be at least 40. You can even hold one at your house and be registered officially so that people can follow the calendar for the day. We thought of doing the Meet Nicky and Nora the Hounds from Hell  Levee at our house, it would be novel. To see the full list go to ruk.ca  Peter Rukavina is my neighbour and for more than a decade now has compiled the list of the Levee in Charlottetown.

A Levee is an old tradition in Canada going back to the 17th century.

The word levee (from French, noun use of infinitive lever, “rising”, from Latin levāre, “to raise”) originated in the levée du soleil (rising of the sun) of King Louis XIV (1643–1715). It was his custom to receive his male subjects in his bedchamber just after arising, a practice that subsequently spread throughout Europe.

In the 18th century the levee in Great Britain and Ireland became a formal court reception given by the sovereign or his/her representative in the forenoon or early afternoon. In the New World colonies the levee was held by the governor acting on behalf of the monarch. Only men were received at these events. Women were presented in the evening at court.

It was in Canada that the levee became associated with New Year’s Day. The fur traders had the tradition of paying their respects to the master of the fort (their government representative) on New Year’s Day. This custom was adopted by the governor general and lieutenant governors for their levees.

The first recorded levee in Canada was held on January 1, 1646, in the Chateau St. Louis by Charles Huault de Montmagny, Governor of New France from 1636 to 1648. In addition to wishing a happy new year to the citizens the governor informed guests of significant events in France as well as the state of affairs within the colony. In turn, the settlers were expected to renew their pledges of allegiance to the Crown.

The levee tradition was continued by British colonial governors in Canada and subsequently by both the governor general and lieutenant governors. It continues to the present day.

As mentioned, the levee was historically a male preserve but during World War II levees were attended by female officers of the Canadian Armed Forces. Since then levees have been open to both women and men.

As has the levee itself, refreshments served at levees have undergone changes (both in importance and variety) over the years.

In colonial times, when the formalities of the levee had been completed, guests were treated to wine and cheeses from the homeland. Wines did not travel well during the long ocean voyage to Canada. To make the cloudy and somewhat sour wine more palatable it was heated with alcohol and spices. The concoction came to be known as le sang de Caribou (“caribou blood”).

Under British colonial rule the wine in le sang du caribou was replaced with whisky (which travelled better). This was then mixed with goat’s milk and flavoured with nutmeg and cinnamon to produce an Anglicized version called “Moose Milk”. Today’s versions of Moose Milk, in addition to whisky (or rum) and spices may use a combination of eggnog and ice cream, as well as other alcoholic supplements. The exact recipes used by specific groups may be jealously guarded secrets.

I have had both Caribou blood which is mighty potent and Moose Milk, great Canadian drinks, there is no better way to start the New Year. This year I will be volunteering at Fanningbank the Residence of our Lieutenant Governor. A big crowd is expected that day. 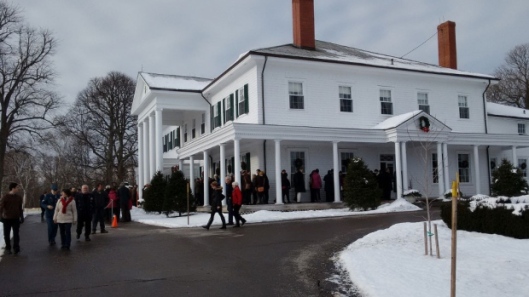