Thinking of Istanbul, I am remembering my frequent visits there and the wedding of Friends at the Ciragan Palace on the Bosphorus and their stay of the Pera Palace Hotel built in 1892 exclusively to house the passengers of the Orient Express. Room 411 is a museum to Agatha Christie, she stayed at the hotel and wrote her mystery novel Murder on the Orient Express. The number of famous people who at one time stayed at the Pera Palace is far to long to list, it defies the imagination. The hotel was beautifully restored to its original splendour just a few years ago. It is fun just to go to the bar and have a drink and think of all those people or have dinner in the restaurant, it has a charm and atmosphere all its own. I am currently reading the book of Charles King, Midnight at the Pera Palace, who gives a good description of Istanbul at the time and its history after 1919 and the fall of the Empire and the rise of Mustafa Kemal Ataturk, a real page turner. 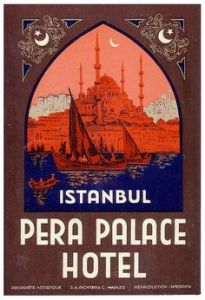 However after the fall of the Empire in 1921 and the emergence of the Republican government in Turkey, the Pera Palace fell on hard times and the new owner a Lebanese Arab who had acquired the new Turkish Nationality tried to maintain its standards but the Orient Express no longer travelled to Istanbul and the affluent clientele was rare. The Capital of the Turkish Republic had also moved to Ankara in the 1923. When I first visited the Pera Palace Hotel in 1995 it was a dusty old place with too many ghosts. It was no longer a luxury hotel but more a decent three star hotel, the decor had not changed, no but it was worn out. Since the neighbourhood of Pera or Beyoglu and the city have seen many changes for the better.

In the book Monsieur Poirot stays not at the Pera Palace but at the Tokatlian Hotel on the Grande Rue de Pera nowadays called Istiklal street. Unfortunately the Tokatlian no longer exist, the last news in 2011 mentioned that the hotel was in a state of ruin. It was the hotel of the high society in Istanbul for a very long time. Nonetheless many foreign government still keep Consulates, formerly Embassies, some are quite grand in architecture and decor. Istiklal is a very nice street to walk. 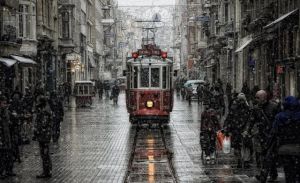 The old tram line on Istiklal street in Winter

The Suleymaniye Camii across the Golden Horn from Galata built in 1550 by Sinan for Suleiman the Magnificent. It is the largest mosque in Istanbul.

Visiting the old Imperial Mosques in the City is also very interesting because of their architecture, decorations and park settings. Each Sultan upon ascending the Imperial Throne would have a Camii (mosque) built. Note how they all follow the model of Hagia Sophia and this style is known as Ottoman Imperial style with its pencil like minarets. The old Ottoman cemeteries are fascinating, each tombstone indicates the rank of the person buried, or in the case of women carved stone bouquet of flowers indicates how many children she had. There are also the larger Mausoleum for the Sultan and his family members.

The mausoleum of Suleiman the Magnificent and his family, tombs are surmounted by White elaborate Turbans the Sultan would have worn and indicates his rank as a Sovereign.

Eyup Cemetery, is famous, the mosque of Eyup (Job) is considered to be the third most Holy Site in Islam after Mecca and Jerusalem. It is said to be the burial site of Eyup Ensari the friend and Standard bearer of the Prophet Mohamed, many devout Muslims pray here. There are many elaborate tombstones indicating the rank and attributes of those buried here, all have a different shape hats, turbans or fez which in life would indicate their social rank.

Coming back down the Golden Horn and following the Bosphorus we come to the Ciragan Palace built around 1867 was to have a rather sad story, the first inhabitant was Sultan Abdulaziz who did not live there very long, he was found dead one morning in 1876, just a few days after having been deposed by his brother Murad V who did not reign long for reason of mental illness. Murad was imprisoned in this opulent palace jail until his death in 1904 by his brother Sultan Abdulhamid II. A fire damaged the interior of the Palace in 1909 and with the end of the Ottoman Empire it was abandoned. Today the Palace has been restored and is operated by Kempinski as a  five star luxury hotel.

Ciragan Palace on the Bosphorus with its Sea Gate.

What I enjoyed was simply walking and looking around the City and its monuments, its old streets, the history and its secrets. Turkish people are charming and courteous. There is a certain elegance to this old city, though my last visit was many years ago, I wonder how I would find it now. But I also have to tell you about Yildiz and Dolmabache and Ortakoy one of my favourite spots in Istanbul.