Today 24 May is the Birthday of Queen Victoria who is 196 years old. It is also the National Capital Marathon Weekend, some 10,000 + runners from around the world participate. We live in the middle of Marathon central so our streets were closed to traffic. It is a nice atmosphere, lots of people out enjoying themselves.

The story about Queen Victoria and the Capital Ottawa is about how she chose this in the middle of nowhere lumber camp at the entrance to the Rideau Canal to be the final choice for a Capital for Canada. The Chief Minister at the time John A. Macdonald a willy Scot worked his charm on her as early as 1857 by showing her nice water colours of the surrounding area and by 1864 she decided that Ottawa would be it. Not knowing that it was a mud town full of drunk and rowdy lumberjacks. Up to that time Quebec City had been the Capital since 1608 but then politicians moved the Elected Assembly to Montreal, because it had paved streets and lights and then to Toronto which did not have much and then to Kingston on Lake Ontario which was far to close to those damn Yankees. For years we celebrated on 24 May the Empire but after Victoria’s death in 1901, the celebration where held in her memory.

The British Hotel (1834) in Aylmer, Quebec beautifully restored. Aylmer, named after a Governor General, is a small town 10Km West of Ottawa on the Quebec side of the Outaouais River. The town is full of building like this one. The Brit is famous because in the 1950’s all the Jazz and Blues great names came to play here. This was the place. The owner for many decades was this old Polish fellow and when he died at the age of 98 some 7 years ago the family sold the building. It was in very poor state, an investor  bought it and voilà. Aylmer was known in the 1930’s to 1960 for the big band and Jazz Clubs who came to this small town and brought with them the monied crowd of Ottawa who also went to the Connaught Racetrack and posh Golf Clubs. The reason for the popularity of Aylmer was the rather liberal liquor laws of Quebec where bars open at 7am and close at 3am. In Ottawa bars opened at noon and closed promptly at 11:30pm. The difference between French Roman Catholics and English Presbyterians.

The weather has been very cool if not cold some nights very unseasonal. There is clearly climate change. It is worrisome.

Here is some pictures of the last few weeks and things we have been up to. 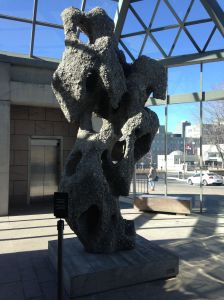 Ugo Rondinone, FEET, which is one of 9 sculptures based on the Chinese Scholar’s rock. Based on ancient Chinese Literati tradition of appreciation for eroded stones that take the form of landscapes or living beings. Can be seen in the smaller visitors entrance of the National Gallery of Canada.

A special exhibit on Chagall opens at the NGC this week. The theme is Daphnis and Chloé. The set of lithographs titled Daphnis & Chloé is considered Chagall’s most important graphic work. Through fanciful compositions and bright hues, the artist illustrates the pastoral idylls of the goatherd Daphnis and the shepherdess Chloé on the island of Lesbos, as recounted in a second-century Greek tale. 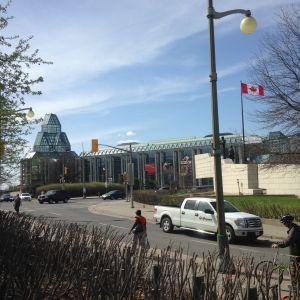 The Archbishops Palace c.1848 on St-Patrick’s Street on the South side of the Cathedral.

The old War Museum which has been closed and empty for the last 10 years, next to the NGC. It was recently sold to Prince Karim Aga Khan for his peace foundation. He is the step-son of Rita Hayworth. The Aga Khan is the leader of the Shia Ismaili branch of Islam. He is a direct descendant of the Prophet Mohammed. He had a very modern Embassy Chancery built next to the Ministry of Foreign Affairs. Though he is considered an Imam in Shia Islam, for a holy man he is not the usual type, he is a ski champion, raised in Europe, he is a billionaire and spends his money on international development through his foundation.

The Flag of the Montreal Canadien Hockey Team flying in front of the Mayor of Ottawa’s Office. After the Canadien beat the Ottawa Senators in the semi-finals.

Casa Loma in Toronto, the largest Castle Palace in North America built by General Sir Henry Mill Pellatt in 1913 for the sum of $3.5 million dollars. He was a wealthy and important businessman/investor in Canada and the Commanding Officer of the Queen’s Own Rifles Regiment. I will have to do a separate entry on Casa Loma it is a wonderful place to visit. Not pictured here is the Lodge and the stables and garage across the Street which are equally grand in design. 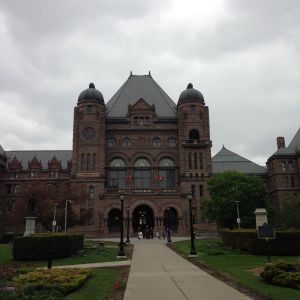 Queen’s Park, Legislative Building of the Assembly of the Province of Ontario in Toronto. The building was completed in 1893 in the Romanesque style.

the Four Seasons Centre for Performing Arts on University Ave in Toronto home of the Canadian Opera Company. Opened in 2006.

the auditorium, really a beautiful space. We saw Blue Beard’s Castle by Béla Bartok, a Robert Lepage production and Erwantung by Arnold Schoenberg.

Osgoode Hall, Law school and seat of the Law Society of Ontario. Built in 1829 in the Palladian style during the reign of George IV the building was completed under William IV, it stands across the street from the Four Seasons Centre and next to Toronto City Hall.

On our balcony while Will is planting lavender and other plants, our Nora, can you see her hiding next to the Lavender.