Yes since Thursday night a wild storm has raged over the Island Province. The Confederation Sea Bridge had to be closed which is exceptional because of the winds of 107Km per hour. Here in the Capital Charlottetown the wind was at 90Km, flights cancelled, no ferry service, the snow plows of public works were pulled off the roads and the RCMP advised everyone to stay home, roads are closed. Some people did go out and ended up in the ditch because of the intense snow white out caused by the winds. Police could not help them at all. Only going to people who were injured in emergency situations.

All schools and all businesses are also closed. All night we could hear the wind slamming our house and the howling sound coming off the sea. It was pretty though with the snow swirling all around like a being in a giant snow globe. 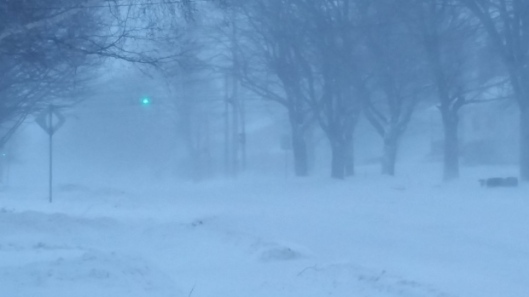 So we did like everyone else which is have plenty of food in the house and just enjoy a quiet time, we made macaroni and cheese from scratch using 5 yr old Cheddar and Parmesan. Then this morning got up at 8am to see the winds had not died down and were just as furious, in the park behind us the Canadian Flag on the pole of Confederation Park was just being stretched by the wind in a West to South East direction. There was no one about, no cars and the streets covered in snow, so I was not going to go out to walk the puppies at any rate they would have refused to go out,  I opened the door Nicky just stuck his nose out and sat back, to say I am not going out there even if I really have to pee. We did go out quickly, no walk, just enough to do what had to be done and run back quickly in the house. They do not like such high winds because it pushes them about and it scares them.

I was suppose to entertain at Lunch today but my caterer did not come in to work and my guests called to say they would not be coming in this weather. I told them to please stay home, too dangerous to go out.

But tonight there is a party we are going to, just about 100 feet from our house and it will be one of those great parties. Here on this photo above is the new light system on the tower of the Charlottetown City Hall, our Empire State Building, it is a new system which allows the city to flash various colours for different events, is that snazzy or what.

Here above are the lights around the Confederation Centre of the Arts where I work as a volunteer docent in the Art Gallery.

What would PEI be without its lighthouses. Now tomorrow Saturday and then Sunday the weather will become quite warm, we will go from a current temperature of minus 15 C to plus 12 C, meaning that a lot of this lovely snow will melt quickly in the forecasted rain, that is Island weather for you.

Finally I thought this was a very different type of decoration for the Holidays and quite beautiful.