I learned yesterday that 50 years ago the movie the Godfather premiere, is that possible, I was 16 yrs old and remember seeing the movie and thinking how horribly violent it was. Not like the Hitchcock movies where the violence was always implied like the music or lighting or blood in water.

Today FB reminded me that this week in 2009 we went to Capena to pick-up Nick and Nora who were 9 weeks old to come and live with us. They were and still are the cutest and funniest puppies, it is said that dogs are clowns and make our life enjoyable.

We are already past the halfway point in March, time is going supersonic it seems. I left a message with our accountant today so she can do our income tax. I never learned how to do it myself, it is not complicated but I am lazy and prefer have someone do it for me. She can also file automatically with Revenue Canada.

At the Club one of the member is a retired Commodore of the Royal Canadian Navy, who commanded his own war ship. Today HMCS Halifax left for the Baltic Sea to join our NATO mission in support of the Baltic States. Jim told me on Friday night that if he was 20 years younger and in good health he would be back in service in a flash. He really misses going out to sea.

I went to the Farmer’s Market today and now that most restrictions are lifted it was the first normal market day in 2 years. There was lots of people and business was brisk. I stopped at the Cheese counter, they have the most beautiful selection of fresh cheeses. They bring them in from Quebec where there is a well established cheese making culture. They also import from France and UK. Strangely their prices are better than the grocery store where all the cheeses are manufactured from large companies and wrapped in plastic. When she sells her cheese, she wraps them in wax paper to keep them moist and fresh, which is the way to do it. All the cheeses are sliced in front of you, I got a slice 200gr of Brie, I also got 200gr of Morbier which is a cheese that has a trace of wood ashes in the middle and a slice of Emmental. I think next time I will get some of her high quality Burrata and some Raclette which is a wonderful cheese you melt and serve with boiled potatoes as they do in Switzerland. I also got deep purple tulips, grown here on the Island by VANCO a Dutch company, they are now in season and the variety of colours is amazing. I also got at the Butcher some veal schnitzels and some Bratwurst made by the butcher. I then went to the fishmonger and bought 2 pieces of Atlantic Salmon for dinner. I also bought some bread at the Bakery which is made daily at 3am and ready for sale by 9am it is still hot to touch and smells wonderful.

Today was a beautiful sunny day and the last day of Winter. Tomorrow is the first day of Spring and it feels and smells like it.

It is said that the tulip flower comes from Turkey and its shape inspired the turbans worn by Ottoman Officials and the Sultan. 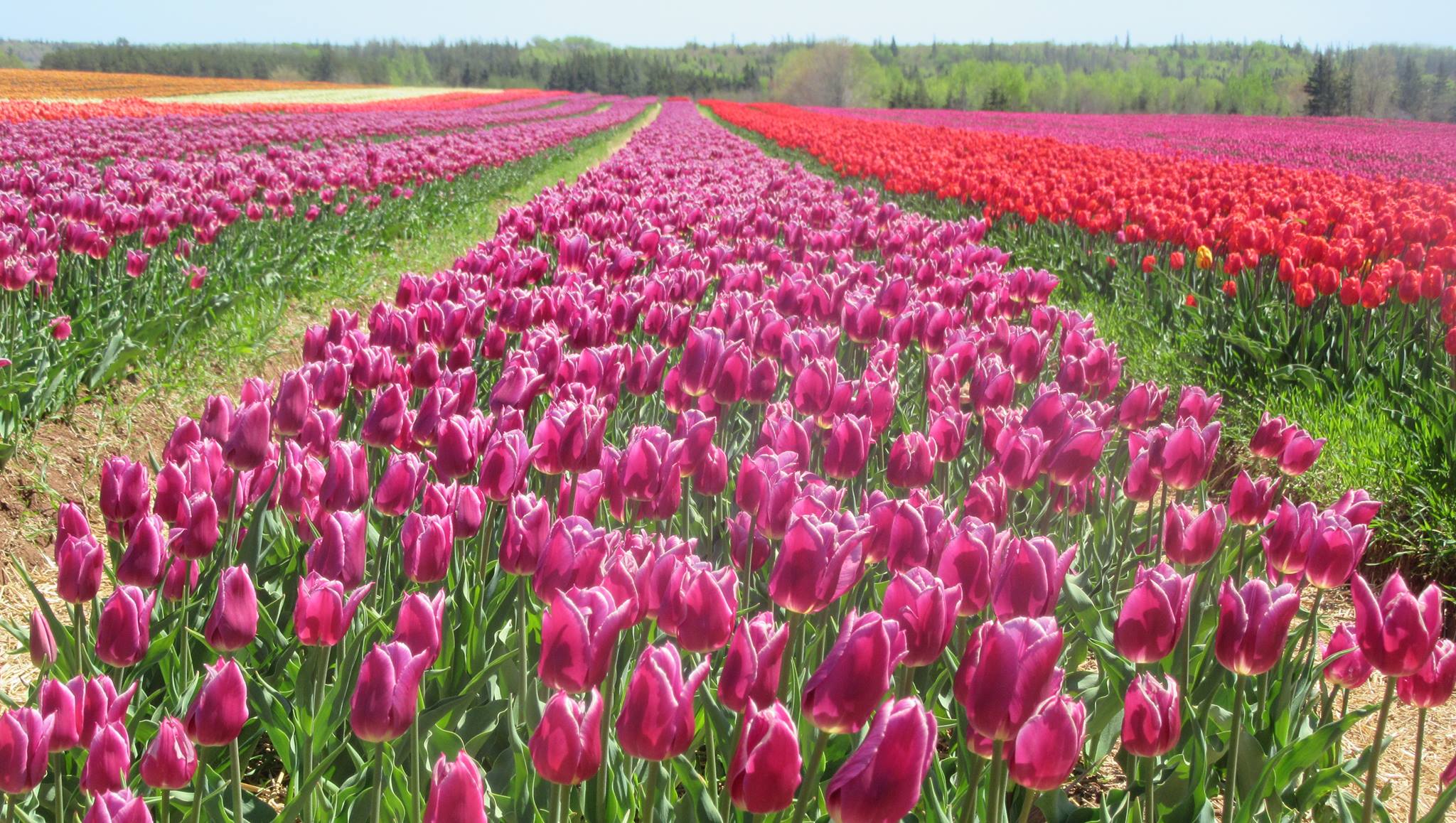 Whatever the story here is a photo taken this week at Vanco Farms in Dromore PEI. A giant field of tulips about 25 varieties grown here on the Island for markets in Canada and elsewhere. Quite the sight to see, impressive, no need to fly to Holland to see this sight. It will be all over in a few more days when the tulips will be cut and will be available here and elsewhere. In fact I have bough tulips as early as a month ago at the local market, the price is anywhere from $5 to $8 dollars a bunch. Makes such a beautiful bouquet.

Spring is blooming in all directions at the Vanco Farms in the 50-acre tulip field in Dromore. Between 20 and 25 varieties – millions of bulbs – are planted, creating row after row of colour. The process of topping, which is cutting off the flowers, will take place in the next seven to 10 days.