The new banner on my blog is taken from a view of the Roman Forum in central Rome. On the right of the Photo is the Palatine Hill. The Arch of Titus stands at the beginning of the Via Sacra, the processional route of the Forum where Roman generals would pass in triumph on their way to the other side of the Forum and then climb the Capitoline hill to the Temple of Jupiter, Great and Best. It is best to go to the Forum early in the morning before 10am to avoid crowds or later in the afternoon after 4pm. It can be a beautiful place, quite interesting with its old monuments and vegetation.

This arch was built to celebrate the final destruction of Jerusalem in 70 AD by Titus, son of Emperor Vespasian. The arch is an honorific monument built shortly after the death of Titus by his brother Emperor Domitian in 80 AD. This arch depicts the treasures of the Temple of Solomon being brought back to Rome as spoils of war by Titus. The 7 branch Menorah, the Arch of the Covenant and the Trumpets. These treasures will be placed in the Temple of Peace where they will remain until 370 AD when they mysteriously disappear never to be seen again. This arch of Titus will be used as the model for all other arches being built around to world, the Arc de Triomphe in Paris is bigger but is based on this model.

I am itching to write something about the idiotic discourse in Canada at the moment based largely on ignorance on Niqab, Hijab and what else or on the Federal Election Campaign with the depressing campaign theme of Fear, Vengeance, War and Xenophobia but I won’t, I remember the words of my late mother who use to say to us children that in life when confronted with this sort of unpleasant dish it was better to take the high road. Though I would like to know when did ignorance become a virtue?

So let me talk instead of a very interesting discussion going on right now in Rome about a short bit of roadway called Via Alessandrina. The blog Roma Archeologia which reproduces articles in Italian and sometimes in English, explains the debate amongst archeologists and academics who study Roman ruins and the area of the Roman Forum, the old original centre of the Eternal City. The Roman Forum we see today with all the ruins of the ancient city is due to the political program of Il Duce Benito Mussolini who wanted to resurrect the glory of Imperial Rome in modern times. So dig and dig it up and that is what he decreed. This old centre had been buried for centuries and new neighbourhood had grown above it at the end of the Middle ages around 1400. So the old ruins took on an added importance as symbol of the greatness of Rome and Western civilization. Via Alessandrina was a street in a neighbourhood built around 1500 which also marks the renaissance of the City and the re-building of many churches in a Renaissance or Baroque style and of the Basilica of St-Peter, the original one was simply demolished.

In 1930 Mussolini wanting to re-model the centre of Rome and celebrate the Roman Emperors had the whole neighbourhood around the Via demolished only Via Alessandrina, the street, remains, but the demolition uncovered the Forum of Julius Cesar, Forum of Trajan and the Forum of Augustus and Nerva, Archeologists knew it was all there but had no means to get to it. This was very significant politically for Mussolini and in 1934 he organized huge celebration to mark the 2000 year of the birth of Emperor Augustus by having his giant Mausoleum renovated and the museum of the Ara Pacis built. 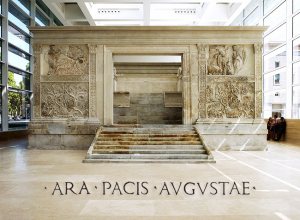 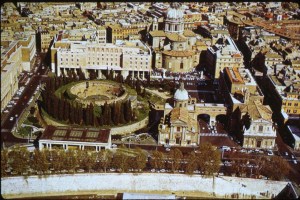 The round structure in the picture is the ancient mausoleum in the old Fields of Mars in Rome.

So we come to today and our modern preoccupations with history and what to do with the legacy of Mussolini. For the last 30 years there has been talk about closing the  street Via Alessandrina and removing it all together so that the different Fori could be explored fully and freed from this obstacle restoring them to their original land size. Every year more and more artefacts are unearth and  this has excited many archeologists to the potential of the area. The main road which was built by Mussolini for his military parades the Via dei Fori Imperiali is also another sizeable problem open to discussion it runs parallel to Via Alessandrina and it much wider, longer and bigger. It runs from Piazza Venezia to the Colosseum and at the moment the Mayor of Rome Ignazio Marino will have it closed to car traffic several weeks of the year and every Sunday. There has been an enormous amount of excavations going on in and around the Roman Forum in the last 15 years and our understanding of this area has much improved.

Via Alessandria and the partly demolished neighbourhood in 1932. Via dei Fori Imperiali is on the bottom left under construction. 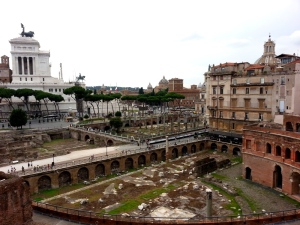 What you see now, the ground level corresponds to the late second century AD, meaning that if you are looking for ruins from the time of Julius Cesar 44 BC they are about 4 meters below ground level. It is difficult for a visitor to Rome who may not know much about the ancient structures what they are looking at or what it all means. But with the announced plans to raise the 7 pink granite columns of the Temple of Peace built by Vespasian to celebrate the victory of his son Titus over the Jews and the final destruction of the Temple in Jerusalem, you can see continuous changes in the Forum.    https://www.flickr.com/photos/imperial_fora_of_rome/sets/72157600215755762

Despite opening up more and more space to walk around in the Forum, you are still restricted to a path mostly the Via Sacra which is the old parade route through the Forum and side streets connecting the various antique temples and buildings. It is all fragile and too often mass tourist movements are simply not sensitive enough to what they are looking at. However if you steal an artefact or deface a monument the fine is $28,000 dollars and one month in jail, yes it is enforced.