I went on posting to Egypt in 1989 after completing my posting to Mexico, quite a change in geographic location, I was also responsible or accredited to the Sudan. Both countries have a long history. Egypt is the largest and most populous country in the Near East or North Africa and the leader of the Arab World until recently. Radio, television and movie production all came from Cairo, the oldest movie production studios are in Cairo circa 1938 and Egyptian culture dominated the air waves this also means that Egyptian Arabic dominated the Arab Speaking World. It is in terms of a spoken language not as pure as Classical Arabic spoken by Bedouins, often you will hear students of Arabic wanting to go live with the Bedouins to learn highly classical Arabic which is quite beautiful but so difficult to learn.  If you want a comparison Egyptian Arabic is like American slang if you compare it to British English in terms of vocabulary pronunciation. Grammatically Arabic is a complicated language and difficult to master unless you are a serious student. It is poetic language very florid and it follows very different rules in terms of how you formulate a sentence again in comparison to English which is relatively simple as a language.

The Cairo of 1989 was like New York a big, noisy, bustling town, it is truly a city that does not sleep, with a population of 9 million people compared to 2014, the population is now 14 million. Cairo is also a very old City, its foundation dates around 869 AD and architecturally it has many influences and you can clearly see the history of Egypt through the centuries in the buildings and palaces of the City. Various dynasties the Abassid, the Fatimid, the Ayubid, Umayyad dynasties and rulers built the patrimony of Cairo, always following the idea of a great Imperial City to reflect the long rule of the Egyptians over neighbouring countries and region. These Arabic dynasties ruled from Bagbdad and Damascus, later under Ottoman Turkish rule from Istanbul but Cairo being more populous attracted quickly more political clout. Mecca in the Hejaz in comparison is a religious centre and a relatively small new town.  Cairo also became a religious centre with great mosques and the Al-Azhar University with examples of magnificent Islamic architecture, truly marvels of art and with many connections to Mecca due to the migration to Egypt of the relatives of the Prophet after his death. The historian K.A.C.Creswell wrote a wonderful book on early Muslim architecture in 1958.

The night I arrived in Cairo was in early July, so fairly warm around 28 C. my plane touched down around 10pm, Cairo Airport was about 30 Km outside the city then, a big sprawling complex, welcoming all the major airlines of the world. The Embassy driver was waiting for me and took me to my hotel which was on the Nile about two blocks from our Embassy in Garden City. I immediately noticed the heavy traffic and people walking everywhere, Cafés full of people, lights, music and the stench of blood everywhere. 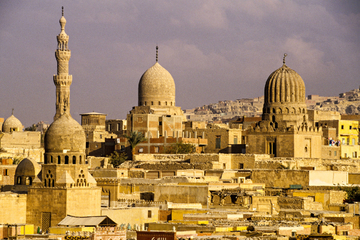 The stench of drying blood was very strong and as we came closer to the centre of the city it was unpleasant. We took the Moqattam Cliff road passing through the Cemetery of the Mamluks and then around the Old Citadel of Salaheddin turning down on to Qasr Al-Ayni road which passes along the Aqueduct (c.1311) to Fumm Al-Khalig on the Nile and turning again unto the Corniche. I asked the driver about the smell and he looked at me and said, Sir it is the great EID and people follow the tradition of slaughtering sheep as Abraham was commanded by God. I also noticed in the more popular neighbourhood that people would then smear the door ways of their houses with the blood of the sheep another biblical tradition.

The aqueduct of Sultan Al-Nasir Muhammad stretches half a kilometre from the Nile to the Citadel.

The meat of the sheep is then roasted and served up, first to any poor person you might know or beggar, this is an obligation and people respect it. When we got to my hotel the Semiramis Intercontinental which is next door to the famous Shepheard hotel, home of British spies and intrigue during WWII, it was around 11:30 pm. The street was absolutely packed with revellers, music, lights, it was like a carnival.

As I entered the lobby with my numerous suitcases, I must have had 4 or 5, they were taken by several Bellhops and then I was greeted by the most fantastic spectacle, there was a great wedding reception going on at least 300 people were singing and dancing, there was a great band dressed in Mamluk era costumes, drums and trumpets and a dozen belly dancers with candelabras on their heads. I was pulled into the Conga line and only dropped off at the Front Desk where the reception clerk greeted me with a smile and said ”Welcome to Egypt Sir”. In many ways the next few years for me in Egypt (Misr) would be like my arrival, one adventure after another, leaving me to this day with great souvenirs.